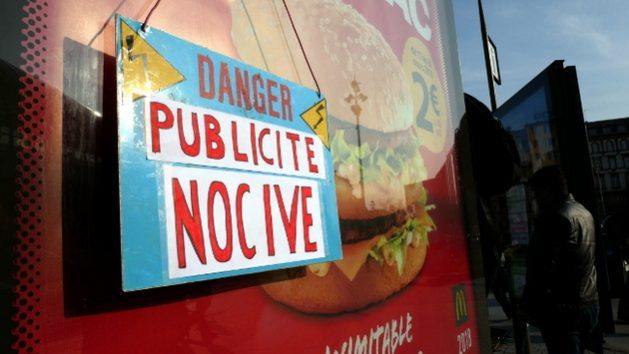 LONDON, Aug 11 2020 (IPS) - “With advertisements removed in Grenoble you can see the city’s beauty and the mountains beyond. Adverts create obstacles. Without them you can breathe,” explains Khaled Gaiji, national mobilisation coordinator of the French anti-advertising organisation Résistance à l’Agression Publicitaire (Resistance to Advertising Aggression, or RAP). “Advertising is like an iceberg: the largest impact is below the surface. Adverts colonise our imagination.”

In 2014 Grenoble’s then newly-appointed Green mayor Éric Piolle cancelled a contract for 326 outdoor advertisements, including 64 large billboards. Trees and community noticeboards replaced them – or nothing at all. The lost revenue was recouped by reducing allowances, including official vehicles. Despite Piolle’s attempts to make Grenoble Europe’s first ad-free city, bus and tram stops still have adverts, as the contract is controlled by the regional authority.

But that hasn’t stopped the ad-free fervour from spreading across France. There are 29 RAP groups across the country, up from five in 2016. They work autonomously with tactics including pressuring politicians like the mayor of Paris, Anne Hidalgo, who paused plans for new digital advertising boards on the city’s streets. To halt this RAP encouraged people to participate in a public consultation.

Ninety-five per cent of over 2000 participants were against the new digital ads. Their reasons speak to why people are resisting outdoor advertising the world over: their negative ecological impact, including the way they drive consumption, as well as the fact that they are invasive, obtrusive and omnipresent.

Outdoor adverts are not consensual: “I can avoid ads in magazines or online. But if I’m walking my baby to the park or if I just want some quiet time outside, I don’t want to be told to buy fast food, fast fashion or cars. However, I can’t avoid these ads on billboards.”

Nationally, RAP co-organised a petition, with other organisations, which collected 60,000 signatures that pressured then finance minister Emmanuel Macron, in 2016, to stop plans to spread advertisements across France’s small towns and villages. In Lyon, 150 activists from RAP protested in March 2018 and 2019 in support of global anti-advertising action, while in October 2019 200 activists marched there in solidarity with ‘Alex’, a RAP participant who went to court for his part in covering advertising spaces in posters. His case is adjourned until June 2020.

Gaiji, who is also president of Friends of the Earth France, says: “Grenoble stopping the advance of advertisements shows that we have a choice. It is like when people ask what has 50 years of environmental activism achieved? But imagine how bad thing would be if [we hadn’t done anything]. We say: ‘Action is life, silence is death’”.

The anti-advertising movement is loud in France, but it has roots further afield. In 2006, São Paulo became the first place in the world to ban outdoor advertising. Then mayor Gilberto Kassab described it as ‘visual pollution’. Within a year, 15,000 billboards were down, along with 300,000 large store signs, in south America’s largest megacity. Cities in India including New Delhi, Mumbai and Chennai have all restricted outdoor advertising. For ten days in 2015, Tehran replaced all advertising with art.

The south-west English city of Bristol hosted the UK’s first national anti-advertising conference on 26 October 2019. Organised by Adblock Bristol, it attracted people from across the British Isles, including members of Adblock Cardiff, which was set up in Wales last year. Attendees from the UK’s second largest city of Birmingham set up their own group after the conference.

“Our big focus is challenging new planning applications for digital billboards, where the industry is expanding. Working with local communities we have stopped 18 new digital screens in Bristol and have successfully lobbied to have some old static billboards removed,” explains Nicola Round from Adblock Bristol.

Round explains that outdoor adverts are not consensual: “I can avoid ads in magazines or online. But if I’m walking my baby to the park or if I just want some quiet time outside, I don’t want to be told to buy fast food, fast fashion or cars. However, I can’t avoid these ads on billboards.”

The conference showcased other successes: lobbying against Bristol council’s plans to extend advertising into green spaces; working with local communities and art projects to showcase alternatives and covering adverts with paper for a day to let people express themselves.

One workshop explored how advertising drives sexism. “Advertising featuring sexualised images of perfect bodies not only encourages us to objectify and dehumanise the women pictured, it trains us to objectify all women,” Sophie Pritchard who co-ran the workshop explains. She is from TIGER (Teaching Individuals Gender Equality and Respect), a local grassroots co-operative working with young people.

“Advertising often presents women as submissive, as possessions to fulfil the needs of men, and men are shown as strong and dominant. These are the core beliefs underpinning domestic abuse,” Pritchard explains, citing numerous studies that have shown that way in which sexualised advertising drives body shaming, mental health problems and misogyny.

Overall, swathes of studies link advertising with selling unhappiness, making us want things we do not need. Fighting against this, different campaigns worldwide focus on limiting specific adverts. Singapore has banned unhealthy food and drinks promotion, including on billboards, going further than similar moves in Mexico, the United Kingdom and Canada. Paris in March 2017 followed Geneva and London to ban sexist and homophobic adverts. In 2005, World Health Organization rules banned all tobacco advertising for its 168 signatories; but investigative research by the Guardian shows that big tobacco still targets children in at least 23 countries of the Global South.

The climate emergency also amplifies another argument against advertising.

“Bristol was the first UK council to declare a climate emergency, so it makes no sense to then install new digital advert screens,” Round explains. “We know from planning applications that a double-sided digital bus advertisement uses the same annual energy as four households. So imagine the big ones, let alone the environmental impact of the over-consumption encouraged by these advertising boards.”

Adblock Bristol has mapped how advertisers target the city’s major roads, noting that areas with the most billboards suffer the highest air pollution. Anti-advert campaigners also want to raise broader questions about environmental justice: why should impoverished areas suffering the worst air pollution – largely due to traffic – host adverts for cars out of the price range of many local people? In the end, selling more cars to motorists stuck in traffic jams only worsens air quality and the climate disaster.

The Bristol conference featured a ‘subvertising’ workshop – a term that refers to replacing or altering billboard images with art. Early subvertising campaigns started as early as 1973 in Australia, focusing on tobacco. More recently, carbon intense industries have been targeted, including adding cigarette-style warnings to car adverts.

“We set out to subvert the dominant narrative forced onto us by corporate advertising. It is important to reclaim the public visual realm – especially when we are being straight up lied to, as is the case with widely used greenwashing,” explains Michelle Tylicki, an artist who has collaborated with subvertisers.

Her work has included making a spoof film poster about the UK fracking firm Cuadrilla – in the style of the horror movie Godzilla. Fracking in the UK has now been suspended following years of pressure from campaigners.

Tylicki also made a poster series that was displayed during 2018’s climate negotiations in Poland. “[It was] to challenge the greenwashing and ‘business as usual’. At this summit it was decided that they will ignore the key 1.5 degrees IPCC report. This shouldn’t come as a surprise considering the ‘climate summit’ was sponsored by Polish coal companies.”

During the summit, the right to protest was severely restricted. One of her billboards (in Polish) read: “Belchatow power station emits more CO2 than is absorbed by all Polish forests. Poland, business as usual. High time for climate justice.”

She tells Equal Times: “Coal still provides 1/3 of electric power in the world. Current CO2 emissions cause 45,000 premature deaths in Poland each year. It is a beastly industry that will continue to walk over dead bodies for profit – unless we challenge it.”

The subvertising movement aims to end the monopoly corporations increasingly have over public space. It organises skill-shares so that more people can democratise their cities and towns.

One reported impact of removing billboards in São Paulo was that it revealed vistas of the impoverished areas that existed behind them. Anti-advertising projects around the world tend to focus on valuing these areas rather than dismissing them as mere ‘slums’. These projects also help us imagine how all cities could be without adverts.

In Mumbai, the NGO Chal Rang De (Let’s Go Paint) has painted houses made from corrugated iron in bright colours. Similarly, the council in Medellín, Columbia’s second city, has transformed severely impoverished neighbourhoods, suffering violence from the drugs trade, by daubing the walls with murals and providing amenities, services and hope. Likewise, in Ghanaian capital city of Accra, artist Mohammed Awudu is guiding young people to turn the informal settlement of Nima into an art city.

Round chaired the conference’s closing session on what should replace corporate advertisements. This, she says, should be up to the local communities. “In Bristol some say more art, like the Burg Arts Project, a rolling series of art by local artists and the local community. Primarily we would like to see advertising gone, perhaps to reveal beautiful buildings. Other communities might want to plant and rewild, or paint murals. There are many ways communities could take this.”