Katiba at 10: A Landmark Constitution and a Blueprint for Deepening Democracy 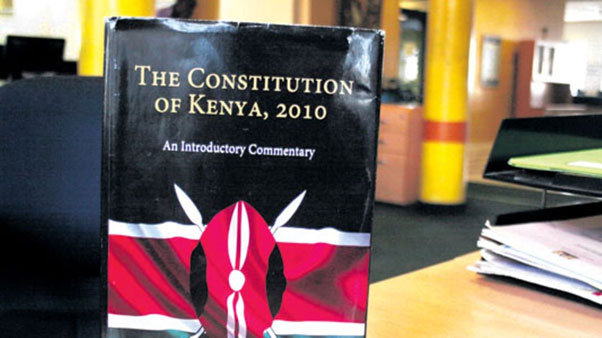 NAIROBI, Kenya, Aug 26 2020 (IPS) - On 27 August 2020, we mark the tenth anniversary of the New Constitution of Kenya – a landmark social contract inspired by citizens’ desire for a country characterised by participatory governance, inclusive development, human rights and the rule of law.

The Katiba is ground-breaking in many ways. First and foremost, it was borne out of extensive consultation by a wide cross-section of Kenyans who debated intensely and passionately to ensure a real people’s constitution.

As recognised in Article 1, sovereign power is now vested in the people of Kenya. Further, it gives prominence to national values and principles of governance, including the rule of law, democracy, public participation, human rights, equality, social justice, accountability and sustainable development. Giving life to these principles, the Bill of Rights recognises and protects a spectrum of human rights and fundamental freedoms, and serves as the framework for social, economic and cultural policies.

The Bill of Rights guarantees economic, social and cultural rights – such as the rights to health, housing, water, education, freedom from hunger and a clean environment. The Constitution also provides for specific protections and affirmative action for children, youth, persons with disabilities, minorities and marginalised groups, to promote their participation, representation and equal enjoyment of rights. The authority of courts to uphold the Bill of Rights, and apply international law as part of the law of Kenya, is a critical feature to enable the people to claim and seek enforcement of their constitutional rights.

The guarantees in the Bill of Rights bear an unmistakable closeness to most of the issues identified in the global sustainable development goals, while the Constitution itself also reflects the United Nations principles and the human-rights based approach and commitment to equality and non-discrimination which underpin delivery of the United Nations mandate. It is an affirmation that good governance is both an enabler and a powerful impetus for sustainable development.

It is in this spirit of shared convictions that, over the past decade, the United Nations country team in Kenya has partnered with the Government and the people of Kenya to support implementation of the Constitution and to advance transformative governance, sustainable development and human rights for all. Adopting a whole of society approach, the United Nations has worked with national and county governments, independent institutions, civil society, community-based organisations, communities, private sector and humanitarian and development partners in pursuit of achieving the Sustainable Development Goals in Kenya.

Devolved government – a key innovation of the Constitution – has been an important aspect of cooperation. The devolved system of governance brings the exercise of Government functions closer to the people, to improve delivery of services and enhance public participation. By establishing 47 county governments and devolving functions such as pre-primary education, health, water and sanitation, agriculture, cultural activities and environment protection, the Constitution underlines counties’ responsibility to lead on social and economic development processes for their populations. County governments spend 41 per cent of their resources on social services. This has contributed to the improvement in the following indicators over the first five years of devolution (2013-2018): the percentage of births attended by skilled health personnel increased from 62% to 70%; the proportion of children engaged in child labour dropped from 34% to 13%; and the net enrolment for early childhood development and education increased by over 10%. 1 The prevalence of chronic malnutrition in children reduced to 26% in 2014, from 35% in 2008.

To continue these development gains, it is essential to ensure adequate allocation of resources to social sectors, and for counties to have increased capacity for evidence-based planning, budgeting and efficient public spending in social sectors most relevant to populations in need. The United Nations is supporting the devolution process by helping counties to build institutional, policy and legislative frameworks for development, including gender-responsive budgeting and gender mainstreaming, improved service delivery based on results-based management principles, inclusive participation and human rights-based approaches.

The country has weathered various storms in implementing the New Constitution, but a number of successes have been recorded. A case in point is the constitutional remedy for the low participation of women in politics and decision-making, with the ‘two thirds gender rule’ brought in to ensure that no more than two thirds of the members of elective public bodies shall be of the same gender. There have been some notable improvements over the past ten years, but heightened efforts will be needed to fully realise the rule.

During the 2017 elections, there was a 7.7% increase in the number of women elected, but they still comprised only 9.2% of those elected to County Assemblies, the Senate and Parliament. Women currently account for 23% of Members of Parliament, including women representatives. 2

Gender equality needs to be driven at national and county levels, through the implementation of laws and policies guaranteeing women’s political rights, and facilitating their effective participation and representation in development planning. County Integrated Development Plans provide an opportunity to put in place a framework for equality and inclusion, to effectively address inequalities and close the gender gap.

As we enter a new decade of constitutional implementation, the United Nations family in Kenya remains committed to continuing efforts in partnership with the Government and the people of Kenya. The next decade coincides with the timeframe for the Sustainable Development Goals and the Kenya Vision 2030. To realise these goals, it is imperative to harness the potential of all – in particular, women, youth, persons with disabilities, minorities and marginalised groups – as envisaged by the Constitution.

Public participation and inclusion will strengthen the central role of the people in the implementation of the Constitution and driving forward sustainable development, transformative governance and the promotion and protection of human rights in Kenya.

In turn, this will accelerate efforts to address inequalities and ensure that the development agenda leaves no one behind.

The leadership of the United Nations Country Team in Kenya