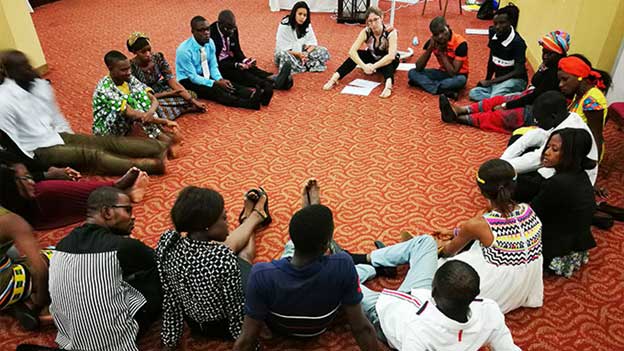 The UNAOC Young Peacebuilders is a peace education initiative that is designed to support young people in gaining skills that can enhance their positive role in issues of peace and security and in preventing violent conflict. Credit: UNAOC

UNITED NATIONS, Sep 17 2020 (IPS) - Last year, we paid tribute to the 20th Anniversary of the 1999 Declaration of the Program of Action on a Culture of Peace. Today, we need to ask ourselves if we had genuinely carried out our moral responsibilities to transition from a culture of hatred and violence to a culture of tolerance and peace.

Did we live up to the commitment we made in 1999 that every one of us needs to consciously make peace and nonviolence a part of our daily existence? I think not.

Given today’s global context, the COVID 19 pandemic has laid bare the world’s vulnerabilities, divisions, falsehoods and brutal inequalities. The ugly truth is that there is no such thing as “we are in the same boat”.

Theoretically, or virtually, maybe we are. But in real life this is a myth or as the UN Secretary General put it few months ago “while we are all floating on the same sea, it’s clear that some of us are in superyachts while others are clinging to the floating debris.”

Since this global human crisis took its toll on all of us – the forces of division and hate too have been exacerbating the lives of vulnerable communities including religious and ethnic minorities, migrants, women, children and youth.

Even old people and those with disabilities were not spared. It is especially appalling to witness a surge in hate speech, xenophobia, racism and despicable forms of discrimination. These evil forces sow fissures and holes in the fabric of our societies triggering a viscous circle of violence.

However, there is always a reason to be optimistic. Last December, the General Assembly adopted 3 resolutions on the Culture of Peace . Res A/74/476 emphasized the importance of fostering interreligious and inter-cultural dialogue.

This powerful tool, which has been often overlooked, is at the core of the work of the United Nations Alliance of Civilizations which is particularly committed to promoting inter-religious and inter-cultural dialogue as a soft power tool for combating intolerance, negative stereotyping, and incitement to violence against persons based on religion or belief.

In this context, today provides an opportunity not only to renew our commitment to the Declaration and the program of action on a culture of peace, but also to commit to taking results-oriented action towards uprooting all forms of discrimination and eliminating inequalities through promoting diversity and broadening the space for intercultural and interreligious dialogue.

In this context, I would like to give a quick overview of the work of the United Nations Alliance of Civilizations :

1. As per the mandate received by the Secretary-General in the aftermath of the attacks against mosques that took place in March 2019 in Christchurch, New Zealand, UNAOC elaborated the United Nations Plan of Action to Safeguard Religious Sites: In Unity and Solidarity for Safe and Peaceful Worship, which was launched by the Secretary-General on 12 September 2019. The Plan is anchored in relevant United Nations General Assembly, Security Council and Human Rights Council resolutions, as well as key religious sources. It provides a framework for action with specific recommendations addressed to all relevant stakeholders to better prevent, prepare and respond to possible attacks against religious sites. More importantly, the Plan emphasizes the need to foster intercultural and interreligious dialogue to build inclusive and resilient societies.

A Global Communications Campaign, aimed at underscoring the role of individuals, particularly youth and the global faith community, in the protection of religious sites, will be launched soon.

2. Over the past year and since the pandemic started, we broadened our outreach to the religious leaders and faith-based organizations heeding the call of the UN Secretary General on religious leaders to support the UN actions in addressing the challenges posed by the pandemic through promoting solidarity unity and compassion. The High-Representative for UNAOC and the Special Advisor for the Prevention of Genocide issued a joint call for “Solidarity, Unity and Compassion”re-affirming the need to strengthen interfaith and intercultural dialogue as well as standing up against stigma and polarization.

3. In our capacity as rotating co-Chair of the United Nations Interagency Task Force on Religion and Development, a statement was issued on 18 April by the IATF with the endorsement of the forty members comprising the IATF Multi-Faith Advisory Council calling on religious leaders and FBO to extend their support and – within their respective spheres of influence and authority – promote and advocate with Member States and other stakeholders for the Global Humanitarian Response Plan for COVID-19 and to help implement the Plan so that essential humanitarian relief operations can reach populations in the most fragile and vulnerable contexts.

4. In support of the document on Human Fraternity co-signed by His Holiness Pope Francis and His Eminence the Grand Imam of Al Azhar Sheikh Ahmed el Tayeb in Feb 2019, we co-organized and supported the initiative “Prayer for Humanity” on 14 May 2020 spearheaded by HH Pope Francis and HE the Grand Imam of Al-Azhar and the UN Secretary General. Many eminent religious figures across the faith spectrum as well as prominent politicians joined the initiative.

5. Adhering to a whole-of-society approach that includes support to grassroots and youth-led organizations through our multiple programs such as the Intercultural Innovation Award (IIA), a flagship project with BMW Group which supports the development of innovative and impactful projects by grassroots organizations that encourage intercultural dialogue and contribute to peace, prosperity and building more inclusive societies. Those projects ranged from Srilanka and Myanmar to Canada, Latin America and the MENA region.

6. Under our Young Peacebuilders programme, a training and advocacy program, we have successfully trained young women and men from MENA and Europe and enhanced their competencies on conflict transformation and conflict resolution, mediation, promotion of non-violent activism, overcoming negative stereotypes, prejudices and polarization as drivers of violent extremism conducive to terrorism. The tailor-made blended curriculum allowed programme participants to work on specific issues related to peacebuilding and prevention of conflict and radicalization in their respective communities.

Moreover, we are very pleased to be joining forces with other leading UN entities such as UNESCO , the UN Office on Counter Terrorism and UNCCT in a number of projects .

With UNESCO and UNCCT we are gearing up to launching the project Intercultural dialogue and socio-emotional competencies for peacebuilding” (a Videogames Project) that supports young people in designing concrete game-based methodologies that develop relevant competencies for intercultural dialogue and social and emotional learning to prevent violent extremism in selected countries in South Asia.

Under the aegis of #YouthWagingPeace, UNESCO MGIEP, UNAOC and the Sri Lanka Commission for the UNESCO brought together and built the social and emotional, critical media and project management skills of 35 young leaders from South Asia (India, Pakistan, Sri Lanka, Bangladesh, Afghanistan and Myanmar), who are working on the ground to prevent violent extremism through education. The young civil society leaders designed 30 community-wide activities to be implemented in 6 countries directly impacting over1,000 community level stakeholders.

UNAOC continued to encourage exchanges and collaboration between young civil society leaders from different cultures and faiths under its Fellowship Programme.

Concluding, it is never too late to reverse course. Fulfilling goal 16 of the 2030 Agenda for Sustainable Development “building peaceful, just and inclusive societies,” is more imperative now than ever before. Allow me to re-iterate that words like dialogue, tolerance, diversity and respect mean little if not supported by concrete broad range of actions under an international umbrella of sincere cooperation from state and non-state actors.