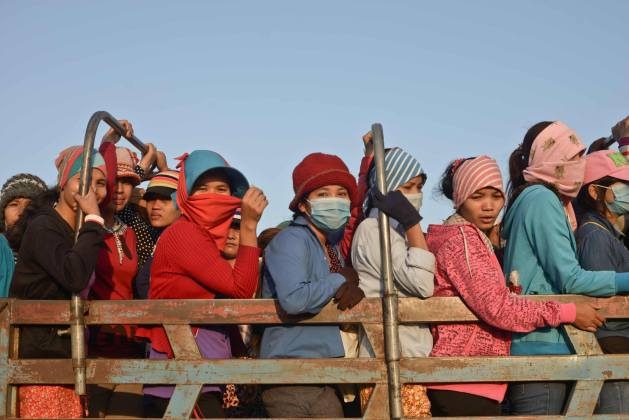 Oct 7 2020 (IPS) - The recent refusal by five international auditing firms to inspect for labor abuses in Xinjiang was the right response to the severe human rights violations there. But this is a moment for the auditing and certifications industry, which assesses the compliance of work sites with human rights and labor rights standards, to rethink its approach to “social audits”—periodic workplace inspections—everywhere.

Xinjiang, the northwestern region of China, is home to minority Uyghur and other Turkic Muslim populations. They have long been subjected to Chinese state repression, but in recent years it has become more extreme. It is extremely dangerous and almost impossible to interview workers about labor conditions  due to pervasive government surveillance. Saying anything at all may be dangerous for workers.

Earlier this year, I spoke to a very experienced auditor who had refused to conduct social audits in Xinjiang over the last few years. “This is all under Chinese monitoring,” he told me. “Every website, every email, everything I read and send is tracked. The control in Xinjiang is so severe… they track your every movement.  There’s also facial recognition in Xinjiang. They capture your face and every activity of yours.”

Over the years, there has been growing criticism of the quality of social audits and their failure to detect human rights abuses and even flag severe fire and building safety concerns, much less sexual or other abuse of the workers by their managers or coworkers

The fact that a few firms have refused to conduct social audits in Xinjiang is an important step. But all firms should do more to publicly acknowledge their limitations in ferreting out labor abuses beyond Xinjiang.

Xinjiang is an example of how hard it is to monitor working conditions in a repressive environment—but it is not the first place in which audits have failed to flag serious rights abuses. Various incidents in the past few years have exposed further problems.

Companies have a responsibility to take steps to ensure that their business operations respect human rights, including labor rights. Many companies largely rely on social audits of businesses that are part of their global supply network—factories, farms, and mines— to produce confidential reports about working conditions.

Companies draw on these confidential audit reports to represent to consumers and shareholders that their operations are complying with human rights and labor rights standards.

Typically, social audits consist of periodic inspections of work sites, once every year or two. Many auditing firms conduct them on a contract-basis for a fee.  Inspectors—or “auditors”—have a herculean task. They have to assess compliance on a range of human rights concerns within just a few days. Auditors do this by going through documents that workplace managers produce, making observations, and interviewing workers.

Worker interviews are usually conducted at the workplace, and that can be a major problem because colleagues and managers know precisely whom an auditor interviewed. Many workers say their managers, whom they fear, coach them ahead of these inspections.

Over the years, there has been growing criticism of the quality of social audits and their failure to detect human rights abuses and even flag severe fire and building safety concerns, much less sexual or other abuse of the workers by their managers or coworkers.

In 2016, the European Center for Constitutional and Human Rights, a nonprofit organization, helped bring a case in Germany against the auditing firm TUV Rheinland following the 2013 Rana Plaza building collapse in Bangladesh that killed more than 1,135 factory workers over the firm’s failure to detect the dangerous conditions in the factory.

Auditing firms have a responsibility to take a rights-based approach to their business in accordance with United Nations Guiding Principles on Business and Human Rights. They are starting to realize that some human rights issues do not lend themselves to the way they conduct these social audits and are not really addressed.

ELEVATE, a company that conducted over 10,000 such audits in more than 10 countries, said in September 2019 that it “acknowledges that social audits are not designed to capture sensitive labor and human rights violations such as forced labor and harassment.”

ELEVATE conducted a series of Worker Sentiment Surveys, cellphone app-based surveys that suggested that social audits are widely off the mark. In Bangladesh, 30 percent of the workers surveyed said they witnessed or experienced sexual harassment.

For instance, SGS, an auditing firm that conducts social audits meant to uncover human rights abuses, says on its website that its audits: “[R]obustly seek out evidence of unethical behaviour in child labour, freedom of association, compensation and pay, excessive and unfair working hours, forced labour, health and safety regulations, and environmental regulations,” including sexual harassment and discrimination, and that such audits let companies “allow your stakeholders, and communities, to trust your organisation is compliant with the law and international best practices.”

Auditing and certification firms should acknowledge the limitations of social audits and identify a set of human rights risks that do not lend themselves to being detected through them. Just as some firms have done in Xinjiang, they should acknowledge that they cannot adequately audit issues like sexual harassment and discrimination at work.

By publicizing the limitations of their current inspections, auditing firms put brands, retailers, agents, and suppliers on notice. It will force companies to take more effective measures to stop egregious workplace abuses. It will make it harder for companies to pass the buck onto auditing firms and take a box-checking approach to their human rights responsibilities.

Taking these measures would send a strong message that auditing firms will not quietly downplay human rights abuses in global supply chains because their approach is not effective in identifying key problems.

For their part, global brands and retailers should work together to create effective local grievance-based mechanisms in the regions in which they operate.

Developing models for collaborative, credible, and independent grievance-redress that is accessible to workers and local communities should be central to how companies approach human rights in their global supply chains. Continuing to rely on social audits will mark out companies as being out of touch with reality.