Enguiya Mohamed Lahu is President of Nova, a Sahrawi youth-led organization for the promotion of non-violence 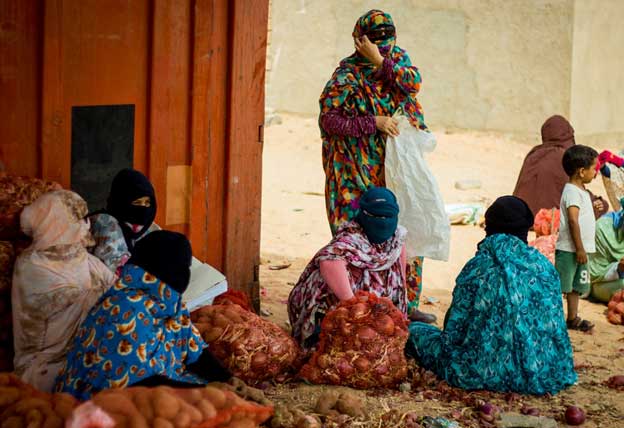 Women in Smara camp – the largest of the five refugee camps – collect their monthly distribution of produce from humanitarian agencies. For many families, these are the only fresh vegetables they have access to, resulting in widespread health conditions related to nutritional deficiencies among the refugee population. Credit: Adad Ammi via Oxfam International

TINDOUF, Algeria, Nov 16 2020 (IPS) - For my entire life, I have been forgotten. I am a Sahrawi refugee, born and raised in the Algerian desert, where my people have remained displaced for 45 years, awaiting the moment when we can finally return to our homeland, Western Sahara.

As we wait, we endure living conditions unimaginable to most – temperatures here soar above 50 degrees Celsius in summer and drop below zero in winter. Water is scarce, delivered to us irregularly by trucks or through deteriorating hosepipes.

Our families rely on food distributions from humanitarian agencies to survive, and many of us grapple with health conditions related to nutritional deficiencies, such as malnourishment, anemia, and stunting. And yet, much of the world is unaware of our existence – in fact, the European Union considers our plight a “forgotten crisis.”

Western Sahara, the last remaining colony in Africa, has been under Moroccan occupation since the signing of the Madrid Accords on 14 November 1975. In 1991, with the agreement of a ceasefire and the creation of a United Nations peacekeeping force, the UN made a promise to the Saharawi people that a referendum would be organized, enabling us to freely and fairly decide our own fate. Decades later, that promise remains unfulfilled and our trust in the international community is eroding.

During that time, another generation of refugees has been born and raised in displacement, acutely aware that the international community has abandoned us. Faced with the prospect of raising our own children hundreds of miles away from our homeland, the frustration among young people in the refugee camps has become palpable.

Nova, a Sahrawi youth-led civil society organization that I was elected to lead this year, is working in the camps to promote non-violence and channel the frustration of young people in constructive and peaceful ways. But without concrete actions taken by the international community to facilitate the peace process, our hope for a peaceful resolution to the conflict is disappearing.

How many more decades will it take for the eradication of colonialism to be achieved? When will the Sahrawi people finally have an opportunity to determine our futures? Our only dream is that we can return to our homeland freely and in peace.

While we understand the challenges that must be overcome for that dream to become reality are immense, Nova believes there are a number of steps that the UN and the international community can take to inspire confidence in the Sahrawi people, and Sahrawi youth in particular. For 45 years, Sahrawi refugees have been displaced to five refugee camps in the Algerian Sahara, where temperatures soar to 50 degrees Celsius in summer, water is scarce, and produce is incredibly difficult to grow, leaving refugees dependent on humanitarian aid for survival. Credit: Adad Ammi via Oxfam International

Firstly, the UN Secretary-General must immediately appoint a UN Personal Envoy for Western Sahara. It has been 18 months – an inexcusable amount of time – since the former Personal Envoy resigned in 2019. It is the Envoy’s responsibility to lead the political process, and in the past year and a half we have witnessed political negotiations come to a total halt.

We cannot afford to lose any further momentum towards peace. As soon as the new Envoy is appointed, he or she should meet with youth representatives in both the Sahrawi refugee camps and the Western Sahara territory under Moroccan occupation to get a better understanding of our experiences of this ongoing conflict.

Secondly, the UN and international community must ensure that the peace process, once relaunched, is inclusive and representative. The Personal Envoy and the UN Security Council should support and facilitate the participation of young people and women within the negotiations process. It is our futures that will be most impacted by any decisions made during this process, and so our voices deserve to be represented at the negotiations table.

Finally, the UN and governments across the globe should boldly voice support for a referendum on self-determination for the people of Western Sahara, in accordance with international law. When Morocco agreed the terms of the ceasefire decades ago, they made a commitment to allow the people of Western Sahara to exercise their right to self-determination without constraint. Many of Nova’s members – myself included – were not even born when these terms were agreed, and yet they still have not been fulfilled.

The silence of the international community on Western Sahara and the situation of my people amounts to acceptance of decades of suffering and injustice. Sahrawi refugees will not be able to truly live in dignity until a just and lasting political solution that provides for the self-determination of the people of Western Sahara is achieved. After 45 years, it is time for global action towards peace.

Footnote:
In a statement November 13, UN Spokesperson Stephane Dujarric told reporters “in recent days, the United Nations, including the Secretary-General, has been involved in multiple initiatives to avoid an escalation of the situation in the Buffer Strip in the Guerguerat area and to warn against violations of the ceasefire and of the serious consequences of any changes to the status quo. The Secretary-General regrets that these efforts have proved unsuccessful and expresses his grave concern regarding the possible consequences of the latest developments”.

He alsol said the Secretary-General remains committed to doing his utmost to avoid the collapse of the ceasefire that has been in place since 6 September 1991 and he is determined to do everything possible to remove all obstacles to the resumption of the political process.
The UN Mission, MINURSO, is committed to continuing implementing its mandate and the Secretary-General calls on the parties to provide full freedom of movement for MINURSO in accordance with its mandate.