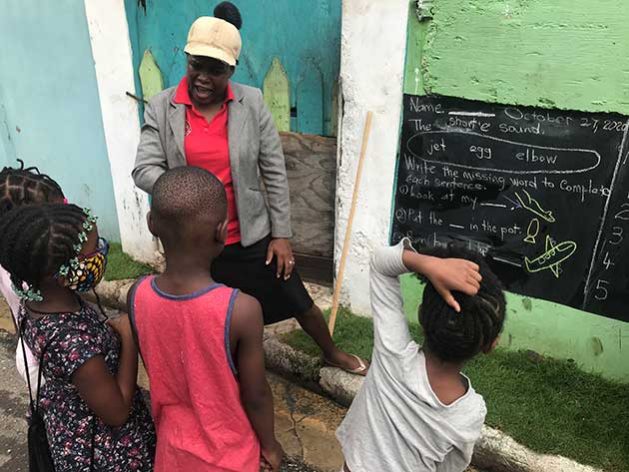 A group of children being instructed by a teacher in an inner-city community. She has painted blackboards on walls to continue her lessons in the pandemic after schools were closed. Credit: Kate Chappell

KINGSTON, Jamaica, Dec 16 2020 (IPS) - In Jamaica, school playgrounds are deserted, filled only with phantom shrieks of delight. Blackboards remain devoid of arithmetic and uniforms hang wrinkle-free in closets. When the first case of Covid hit Jamaican shores in early March, the government closed primary and secondary schools and over 500,000 children transitioned to remote learning. The majority of schools have yet to resume face-to-face classes since the March 13 closure.

Across the world, 1.6 billion children do not have access to school as a result of the pandemic, according to Unicef.

It is this mass absence that experts are flagging as one of main explanations for an increase in instances of physical, psychological and sexual abuse of minors. And even if children are not directly endangered by their caretakers or people in their community, they are suffering the effects of the pandemic, experts say.

Close to one year after the pandemic struck, which to date has killed over 1.6 million people and sickened over 72 million, these effects on children are just beginning to be unearthed. What is already clear though, is that children, especially those living in poverty, are suffering at many levels, and there is often nowhere to turn.

“What we have heard from our partners is that although there is no hard data at the moment, social workers and community workers are seeing an increase in incidents of abuse, incidents of violence, and what is even more troubling is some of the kids who are experiencing these things, they are unable to access the persons who under normal circumstances, they would have gone to make a complaint or a report to assist them in a situation,” says Janet Cupidon Quallo, child protection specialist with Unicef Jamaica.

The lack of a contact point is one of the challenges, Quallo says. “We realize the extent and the significance of school providing that anchor in terms of the psycho social aspects of their life.”

For the children experiencing any type of abuse, before the pandemic, they were under the watchful eye of a guidance counselor, a teacher or even someone in the community. Now, children are isolated and unable to communicate as freely as they could prior to the pandemic. They are in close proximity with their abusers, oftentimes unsupervised. Or, if caregivers are aware of abuse, they may not want to take the risk of going out in public and contracting the disease to make a report to the police.

The chances of being abused also rise as parents and caregivers experience increased financial stress as a result of job or income loss, and then take that out on children. Additionally, with more time spent on devices, children are online for more hours now, which puts them at risk of cyber-bullying or being targeted by predators. Amidst all these heightened risks, there are diminished or even no venues for children to report what is happening to them.

Diana Thorburn, director of research at the Caribbean Policy Research Institute (CAPRI), which has recently completed a report commissioned by Unicef on the socio-economic effect of the pandemic on children says that schools can serve as a safe space for vulnerable children. “Spending more time at home puts children at increased risk of being abused by a family member or caretaker,” she says, adding that schools are often a source of nutrition and information on personal care.

Diahann Gordon Harrison, Jamaica’s Children’s Advocate, an office that was created in 2006 as a commission of Parliament to protect children’s rights, would likely concur with this conclusion. “There is the issue of having children who live in unsavory environments, who may live with their perpetrator if they are victims of abuse,” she says. “They are almost trapped, without an outlet for disclosure.” In fact, Harrison reports that for the period of May 2019 to May 2020, there was a 76 per cent decline in reports to her office. She also notes that reports for January and February, 2020 were on track to exceed instances of abuse over last year. According to the government’s Child Protection and Family Services Agency, it receives 15,000 reports of abuse per year.

Globally, a study from Unicef bears the reality out that children are lacking a mechanism to report instances of abuse. It found that “1.8 billion children live in the 104 countries where violence prevention and response services have been disrupted due to COVID-19. Children may not be able to report abuse because they do not have access to a phone, they may be overheard by parents or caretakers, or they do not have phone credit. 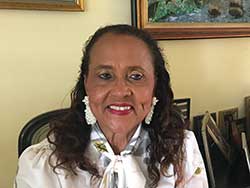 Betty-Ann Blaine, founder of Hear the Children Cry, which focuses on missing children, says her organization has never seen the number of reports so low. Prior to Covid, her organization would receive up to 150 reports of missing children per month. “Since Covid, the numbers have been cut in half. We’ve never seen a figure so low since we have been tracking the problem.” As soon as Blaine got word of Covid on Jamaican shores, she anticipated many problems.

“When we heard that schools were going to be closed across the country, we were already concerned because from many years of experience, we know that when children are out of school, they tend to be more vulnerable to certain types of hazards,” says Blaine. Those hazards include physical and sexual abuse, she adds. The lack of education is also taking a toll.

“The other major issue that concerns us is the lack of access to formal education. I heard it being bandied about that as high as sixty per cent have not had any formal education since the lockdowns of schools. The poor and working classes mainly don’t have access to devices, they don’t have the kind of access to connectivity, wifi, and some live in communities without even broadband.”

In addition to the obvious scourge of abuse, Child’s Advocate Harrison says the effects of the pandemic are multi-faceted. Results from preliminary educational tests administered since the onset of the pandemic are not promising, she says. Some children are also missing out on the basic necessities of life such as routine health checks as their parents cannot afford them. Not to mention the emotional damage. “You had a lot of keyed up adults and parents, and children sensed this, and they feed off this frenzy.”

Statistics compiled by CAPRI and published for a Unicef report show that poverty is an insidious magnifier of the effects of the pandemic:

In Jamaica, eight in 10 households with children experienced a reduction in income, with that figure even higher for female-headed households, those in rural areas in those with lower socio-economic status. The study also found that due to restrictions from the pandemic, just under 45% of households have experienced a shortage of food.

For a small island developing state that is anticipating a 10% contraction in the economy, recovery will be difficult as government tries to cope with competing needs. In the meantime, private and public sector collaborations are focusing on establishing a 24-hour help line for youth who need to reach out for help.

Until this is set up, Blaine worries.

“I worry that the children must feel abandoned, helpless, powerless, because who do they call? How is this going to be done? There are more questions than answers.”