Jan 18 2021 - When journalists are targeted, “societies as a whole pay a price”, the UN chief said on November 2, 2020, the International Day to End Impunity for Crimes against Journalists.

“If we do not protect journalists, our ability to remain informed and make evidence-based decisions is severely hampered”, Secretary-General António Guterres spelled out in his message for the day.

And when they cannot safely do their jobs, “we lose an important defense against the pandemic of misinformation and disinformation that has spread online”, he added.

There were at least 21 attacks on journalists covering protests in the first half of 2020 – equal to the number of such attacks in the whole of 2017, Mr. Guterres said.

As the COVID-19 pandemic has highlighted new perils for journalists and media workers, the UN chief reiterated his call for a “free press that can play its essential role in peace, justice, sustainable development and human rights”.

“Fact-based news and analysis depend on the protection and safety of journalists conducting independent reporting, rooted in the fundamental tenet: ‘journalism without fear or favour’”, he concluded.

However, she noted that for too many “telling the truth comes at a price”.

While journalists are in “a unique and compelling position” to “speak truth to power”, the UNESCO chief observed that the two “do not always see eye to eye”.

Although many have lost their lives covering conflicts, far more are being killed for investigating issues such as corruption, trafficking, political wrongdoing, human rights violations and environmental issues.

And death is not the only risk journalists are facing.

“Attacks on the press can take the form of threats, kidnappings, arrests, imprisonments or offline and online harassment with women being targeted in particular”, the UNESCO chief elaborated.

Even though the 2019 death toll for journalists was the lowest in a decade, the UN official pointed out that wider attacks are continuing “at an alarming rate”.

States have an obligation to protect journalists — UNESCO chief

She noted that in seven-out-of-eight killings, the perpetrators go unpunished, and asserted: “We can and should do more”.

“Journalists are essential in preserving the fundamental right to freedom of expression, guaranteed by Article 19 of the Universal Declaration of Human Rights”, she explained. “When journalists are attacked with impunity, there is a breakdown in security and judicial systems for all”.

UNESCO commemorates the day annually on 2 November to raise awareness and highlight some of the specific risks that journalists face in their quest to uncover the truth.

“On this day, I call on…all Member States and international and non-governmental organizations to join forces to guarantee the safety of journalists and root out impunity”, said the UNESCO chief.

“Only by investigating and prosecuting crimes against media professionals can we guarantee access to information and freedom of expression”.

Among other things, it revealed that most journalists were killed in countries with no armed conflict.

And while impunity for crimes against journalists continues to prevail, in 2020, 13 per cent of cases worldwide were reported as resolved in comparison to 12 per cent in 2019, and 11 per cent in 2018.

The findings also showed that in 2019, Latin America and the Caribbean region represented 40 per cent of all killings registered worldwide, followed by the Asia and Pacific region, with 26 per cent.

“States have an obligation to protect journalists”, and judges and prosecutors must promote “swift and effective criminal proceedings” to ensure that perpetrators of crimes against them are held accountable, upheld Ms. Azoulay. 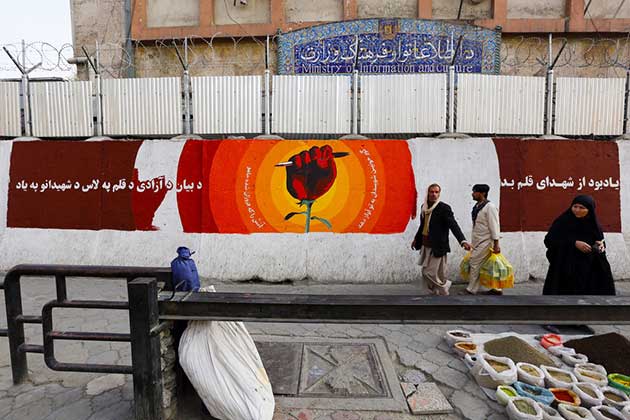 A mural on a blast wall in downtown Kabul commemorates journalists killed in Afghanistan in 2016. Credit: UNAMA/Fardin Waezi