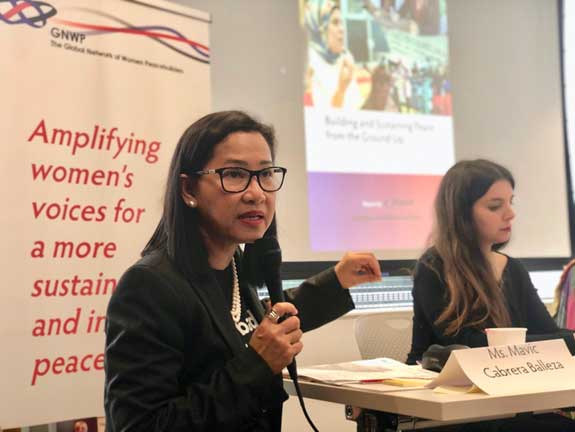 NEW YORK, Mar 5 2021 (IPS) - This year’s International Women’s Day theme is “Women in leadership: Achieving an equal future in a COVID-19 world.” The theme celebrates the tremendous efforts by women and girls around the world in shaping a more equal future, including an equitable recovery from the COVID-19 pandemic.

From our work at the Global Network of Women Peacebuilders, we know that local women peacebuilders are the first responders in this pandemic. They distribute food packs, face masks, hygiene and sexual health products to internally displaced people, refugees, indigenous communities and other groups that often lack access to aid provided by governments and international organizations.

They work with mental health experts to provide online counseling to women who are victims of, or at risk of gender-based violence. They disseminate factual information on how to prevent the spread of the virus. They speak on local radio to counter fake news about the pandemic.

Local women peacebuilders were out on the frontlines at the outset of the pandemic, even as governments did not yet know what to do, or were paralyzed by their own politicking and heavy bureaucracy.

Today, almost a year after COVID-19 was officially declared a pandemic, they remain on the frontlines: advocating for strengthening of health care systems, dismantling institutional inequalities, addressing the long-term impacts of the crisis on livelihoods and peace in their countries and communities, and promoting sustainable recovery.

The success of women-led governments such as Finland, Germany, New Zealand, and Taiwan in managing the pandemic presents yet additional evidence that women’s leadership makes a positive difference.

Despite this, the norm remains that women are not the leaders and decision-makers. Only 24.7 per cent of the world’s health ministers are women even though they make up 70 per cent of health care workers. At the sub-national and local levels, women are often excluded in COVID-19 Task Forces.

UN Secretary-General Antonio Guterres (SG) has stated “the #COVID19 response has highlighted the power of women’s leadership. Yet women remain marginalized from many decision-making spaces. We need to act now to ensure women have an equal voice in our response to the pandemic and other crises facing our world.” Signs of hope in the Security Council, but much remains to be done

As civil society, we join the SG in demanding Member States to institute measures to support women’s leadership!

There are some hopeful developments and opportunities that could be seized. The election of Ireland, Mexico and Norway as non-permanent members of the Security Council can provide a much-needed boost to the calls for women’s leadership.

All of these countries have demonstrated global leadership on women’s rights and gender equality as well as the women, peace and security agenda. Mexico takes pride in its adoption of a feminist foreign policy.

It co-chairs the Informal Expert Group on Women, Peace and Security with Ireland, and is a co-host of the Generation Equality Forum, a civil society–centered global convening for gender equality wherein one of the outcomes is the Action Coalition on Feminist movements and leadership. France, a permanent member of the Security Council, is the other co-host of the Generation Equality Forum, and one of four countries that have adopted feminist foreign or international development policies.

The other two are Canada and Sweden. It should however be noted that there does remain a disconnect between these countries’ aspirations and leadership on the global arena and the actual state of women’s rights.

The confirmation of Linda Thomas-Greenfield as the new US Ambassador to the UN is another key development. With the US having elected the first woman Vice President and other female leaders appointed to key positions in the Biden administration, women’s influence in US Foreign Policy looks to be changing for the better.

It is also important to mention that there are now five women Permanent Representatives to the Security Council namely, Ireland (Geraldine Byrne Nason), Norway (Mona Juul), St. Vincent and the Grenadines (Inga Rhonda King), United Kingdom (Barbara Woodward) and Thomas-Greenfield. Probably the biggest number of women taking up seats in the Security Council in the recent years—if not ever. Security Council members need to unite behind the call for a woman SG and remove the gap between what is stipulated in the Women and Peace and Security resolutions and leadership in the UN.

It is also high time to demonstrate that the most important action that male leaders can take to support women’s leadership is to step back, and share power. This will require men to sacrifice their personal ambitions and set their egos aside for the bigger goal of achieving gender equality and a better world for all.

Electing a woman SG is much more than a symbolic gesture. It is about the UN leading by example which is crucial to its credibility. It is also about fulfilling the promise to nominate candidates for appointment to senior posts in the UN made by 189 Member States during the UN Fourth World Conference on Women in 1995 in Beijing.

Civil society groups such as Equality Now have been advocating for a woman SG. While the next opportunity to elect a woman to the highest position in the UN is still five years away, our advocacy should NOT stop.

Our advocacy should start from the capitals of the 193 Member States and continue through the Permanent Missions in New York. Women’s rights organizations from around the world should demand their governments to nominate and elect a woman as the next SG. And who are the “right” women for this role?

I think we can agree on this set of qualifications: feminist values, strong connectedness with and appreciation of civil society, excellent leadership track record, managerial abilities, extensive experience in international relations, and outstanding diplomatic skills.

From the looks of it, Antonio Guterres is already a shoo-in for a second term. China and the United Kingdom, two permanent members of the Security Council have already expressed their support to the incumbent SG.

For now, and throughout his second term, women’s rights activists need to have discussions with SG Guterres to seek his assurance that he will do everything in his power to pave the way for a woman SG, and integrate feminist values in the work of the UN.

As the UN calls on Member States to ensure women’s leadership at all levels, it needs to practice what it preaches. Echoing SG Guterres, “the #COVID19 response has highlighted the power of women’s leadership.” The world needs women at the decision-making table in order to build back better and equal.

The author is Founder & Chief Executive Officer, Global Network of Women Peacebuilders. She also serves as a consultant to UN Women.