The writer is a Syrian Independent Documentary Visual Storyteller 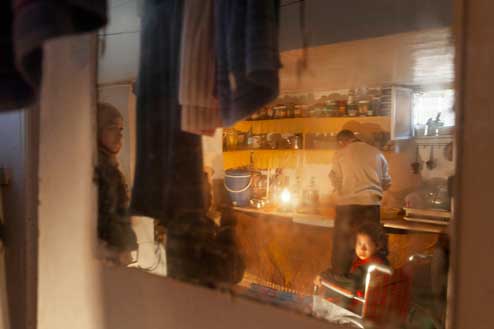 Five-year-old Aya (right, in a wheelchair) was hit by a mortar while she was heading home from school. She said: "I was wearing my brown shoes. The shoe just flew and my leg flew with it. My leg has gone." This photo was taken in Damascus in 2013 by Carole Alfarah

MADRID, Apr 2 2021 (IPS) - Syrians are among the greatest victims of this century, according to the UN Special Envoy for Syria, Geir Pedersen.

Syrians are the victims of a war we did not choose. When more than half of the Syrian population is internally displaced or has become refugees, it’s because we refused to take part in the conflict and have tried to escape the violence. Syrians are people of peace and life.

As a Syrian documentary photographer and photojournalist, I chose my profession 15 years ago to tell my people’s stories and create awareness about social and humanitarian issues. The war has changed the structure dramatically in our society.

Before the war, and despite many imperfections, all Syrians had access to daily essentials. But one of the high prices that civilians in Syria have paid, and are still paying, is losing access to the services that cover our fundamental human needs.

During the past 10 years and through my work, I observed how the face of Syria and its people was changing slowly, and every change was for the worst. We have lost everything; no one can bear the loss of Syrians.

I will never forget the stories that victims in Syria recounted to me to document and share with the world. The mother who lost her son after he was forcibly disappeared; another mother who lost her daughter and husband in a car bombing that targeted a crowded street; and the father who is taking care of his daughter — she lost her leg when a mortar targeted her school.

There are many stories of the internally displaced who lost their jobs, homes, safety and siblings in bombings in their neighborhoods. The millions of suffering people who are today intentionally called ‘the Syrian tragedy’ are all real people who have names, a past and lives that matter.

One of the very dangerous consequences of 10 years of conflict in Syria is that the world has become used to seeing us suffer daily. Our hunger, anguish, loss, pain and death are no longer news; it has become normal in the eyes of the outside observer. 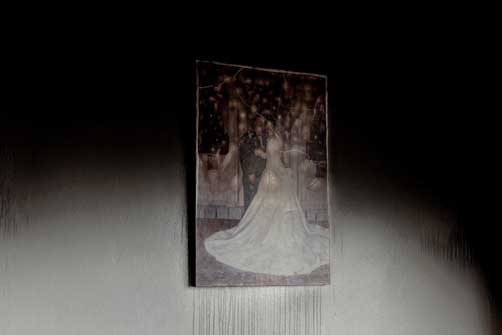 A damaged photograph of a couple at their wedding hangs on the apartment’s charred wall, after it was burned and damaged following heavy clashes.
This photo was taken in Homs, Syria in 2014 by Carole Alfarah.

This is why my job and the job of all Syrian photojournalists and journalists is to keep telling the truth, to show the world that the conflict in Syria is still ongoing. Our photographs will remain a living document of memory and evidence of the human injustice in Syria.

War has always been a business with cost. Many international players are participants in the conflict in Syria, each of them involved for their own benefit. This is why the world needs to pay attention to the war in Syria, because it is an international issue, not a local issue. We, the Syrians, are the victims of a war that we didn’t choose.

From the beginning of the conflict, international political leaders put oil on fire instead of water. We have been left with nothing in Syria today. We have lost our loved ones, our life, safety, memory, our pride, our heritage and economy.

Syrians are sick and tired of war. A political solution is the only way to end our suffering. We need political leaders who have an agenda of peace for Syria and Syrians, otherwise their mission will be condemned with failure. It is a shame on all humanity if they permit the war in Syria to continue.

*Carole Alfarah (1981, Syria), a Visual Storyteller and multimedia editor uses the visual narrative to tell personal, humanitarian, and socially conscious stories that engage audiences and create awareness about vital subjects. Carole’s projects are extended through different platforms such as editorial, books, exhibitions, installations, and films. Her work has been shown widely in festivals, and museums also published internationally in numerous international media outlets. Alongside her work collaboration with international humanitarian organizations and press photo agencies.

She obtained a master’s in Photography and Personal Projects from EFTI School of Photography and Cinema in Madrid, Spain. At the beginning of her career in 2009, she followed a one-year training in Photojournalism by the World Press Photo Foundation.