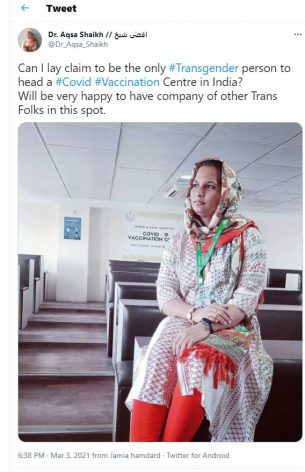 NEW DELHI, India, May 7 2021 (IPS) - When Dr Aqsa Sheikh Tweeted and asked if she was the only transgender person to head a vaccination centre, it seemed extraordinary that in a country with 1.3 billion people, that this could be true.

“Can I lay claim to be the only #Transgender person to head a #Covid #Vaccination Centre in India? Will be very happy to have company of other Trans Folks in this spot,” she wrote on March 3, 2021.

India had turned countless hospitals into COVID-19 vaccination centres – and Sheikh was, and still is, the only transwoman heading one.

Born and raised in Mumbai, Dr Aqsa Sheikh is a proud Muslim transwoman. She is presently living in Delhi and working as the Associate Professor of Community Medicine at Hamdard Institute of Medical Sciences and Research. She is the nodal officer of a COVID-19 Vaccination Center, involved in COVID-19 surveillance, and engaged in vaccine and transmission research. Despite her qualifications even in a pandemic, the idea of a trans-Muslim woman as a doctor defies stereotypes.

“I haven’t faced any active face-to-face discrimination. However, a lot of name-calling on social media is common. In my videos, I get comments of people asking whether I am a man or a woman or why is my voice so masculine,” Sheikh told Inter Press Service (IPS) in an exclusive interview.

“People call us ‘Madarsa chhaap’ (derogatorily referring to being from an Islamic School), ‘Hijras’ (a term sometimes used to refer to trans people in a derogatory manner) and so on.”

When asked how her gender identity affects her daily professional interactions, especially during the pandemic, Sheikh says that often “our stories and our identity travel to people before us”, so people look at her through many lenses.

The intersections of her identity are many, Muslim, transgender, woman, leader, health activist.

She credits two aspects of her life for saving her from stigmatisation often experienced in the trans community. Firstly, a lot of time has passed since she transitioned, and secondly, she is in a position of privilege where she is a provider rather than someone who is seeking the service. Both these make her less of a target for discrimination.

Coming out as a trans woman, however, has not been an easy task for Dr Sheikh.

When she broke the news to her family that she was a transwoman, there was anger, denial, and rebuttal.

She says she understands that for a family which has never had exposure to a transgender person, to accept that someone they have raised as a boy for 20 years now says and affirms that they are a woman was difficult to accept. The transition, which involved surgical and legal transitions, met with increased resistance because she came from a conservative Muslim background.

“While my mother stays with me, the rest of the family is not very comfortable affirming these familial bonds, but then you can’t get everything in life,” Sheikh says. “I am happy that I have been able to do what I wanted to do despite all the opposition from society, and that’s what matters at the end of the day.”

Sheikh also emphasises there is a lot of homophobia within the Muslim community, like most communities. Still, she believes that acceptance of trans and intersex people is a little better, especially for those who transition.

The most important thing, according to Sheikh, is to be comfortable with oneself and be secure in the knowledge that she is not doing anything wrong.

According to Sheikh, the intersectionality of identities at play and understanding them is also imperative.

“You are not just a Muslim person, or just a queer person, just a doctor. You are not just a woman or just an Indian. You are all of them together,” she says. “So, I, for example, do not only speak on the transgender issues, but I also speak on the different issues of the Muslim community. I speak on the issues faced by the Kashmiri Muslims, those faced by the patients while receiving healthcare irrespective of whether they are cis (assigned and identify with a gender given at birth) or trans.”

She feels once people see you as someone who understands intersectionality (the interconnectedness of aspects of race, class, gender, and religion), acceptance increases.

“With COVID-19 and then the subsequent national lockdowns, the number of service providers available for providing services to the trans persons saw a decrease,” Sheikh says. “During such times, the stigmatisation also always increases because one is looking for scapegoats.”

She says the blame for transmission is often placed on minority groups, like the Tablighi Jamaat or trans persons.

Mental health services, which are a privilege for any person in India to afford, became difficult to access during the pandemic.

“Especially (difficult) when it came to queer-affirmative mental healthcare and counselling. The pandemic has been a tough and challenging time for the trans community with so many losing their traditional livelihood measures,” Sheikh says.

With all the challenges that the present pandemic brings with it, she continues with her activism.

“We started a charitable clinic in Zakir Nagar this year. With the second wave of COVID-19, apart from distributing food kits and other work, we are doing a teleconsultation and also helping out people with COVID-19 resources,” she says.

Sheikh’s education was funded by Zakaat Funds (money to be compulsorily given by Muslims for charitable causes), and it’s her dream that the potential of children is not lost because of lack of resources. Eradication of hunger, health and education for all, sensitisation and awareness are her goals.

“I am not sure whether we can achieve these in my lifetime, but that’s what I really look forward to.”