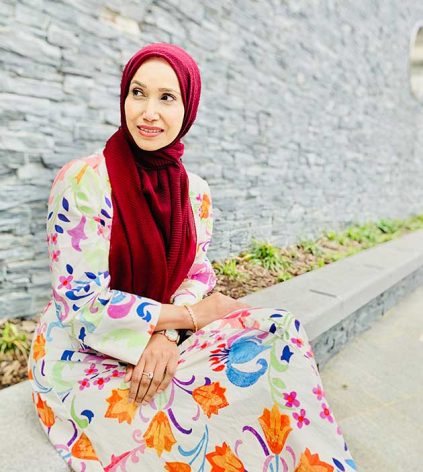 NEW DELHI, India, Jun 14 2021 (IPS) - In 2015, When Rabina Khan was running as an independent candidate in the Tower Hamlets’ mayoral elections in London, a male voter asked her what colour her hair was under her veil. Rabina replied and said, it was pink. This small interaction is what got Rabina inspired to write her book, My Hair is Pink Under This Veil.

The book is about a Muslim woman living in the United Kingdom and how she reconciles her faith with British culture to construct a successful political career against the backdrop of blame, bias, ignorance and misogyny. Rabina Khan through her own personal experience of wearing a Hijab, also highlights the outdated views about Muslim women, challenges the notions of what a Muslim woman can or can’t do and also questions the stereotypes.

“The reason why I responded in that manner was to question the notion that hijab wearing muslim women had no interest in hairstyles, vibrant colors, or fashion,” says Rabina Khan in an interview to me.

“There has always been this narrative around Muslim women that we are seen to be oppressed, we do not have a life, we do not anticipate to become professionals in different sectors or that we become politicians. Women like us, women of color, women of faith, do have a difficult time in mainstream society because we are seeing stereotypes, racism, and prejudice,” Rabina says.

Over the last few years, the United Kingdom has seen Islamophobia rise at a very disturbing rate. In 2011, Lady Warsi claimed that Islamophobia was socially acceptable in Britain, and “passed the dinner-table test”.

In 2015, the Muslim Council of Britain warned of increasing levels of Islamophobia in the UK after a few videos were posted online showing anti-Muslim abuse on public transport.

UN experts had warned of a ‘stark increase’ in hate crimes across the UK, post-Brexit vote in 2018. The UN Special Rapporteur on racism, xenophobia and intolerance, E. Tendayi Achiume said, “it was worrying that the anti-migrant, anti-foreigner rhetoric, developed around the campaign in favour of Brexit had become widespread in society, going as far as to add that a hateful and stigmatising discourse had become “normalised” – even involving some high-ranking officials”.

In 2019, a week after the Christchurch mosque attacks in New Zealand, the number of reported hate crimes against Muslims in the U.K. soared by 5. 93%. Muslims in Oxford, Southampton and Colindale, North London had reported “gun gestures or firearms noises being directed at them”.

Last year in 2020, a dossier of more than 300 allegations of Islamophobia against Prime Minister Boris Johnson and other members of the Conservative party had been submitted to the Equalities and Human Rights Commission to launch a formal investigation.

Just a few weeks ago, Prime Minister Boris Johnson issued a qualified apology for offence caused by his past remarks about Islam, including a 2018 newspaper column in which he referred to women wearing burqas as “going around looking like letterboxes” and likened their appearance to bank robbers. A report in 2019 found that Islamophobic incidents rose by 375 percent the week after Boris Johnson’s article, with 42 percent of reported racist abuse in the streets of the UK directly referencing his language.

“His (Boris Johnson) comments had a profound effect, and a damaging effect on Muslim women, and specificially towards Muslim women in veil,” says Rabina.

“It is really important for politicians to be careful the way they depict Muslim women, and people of faith, whether they are Hindus, Sikhs, Christians or Jews, they have got to be careful because by demonising people, you push people back and not with you.

“There are 3.3 million Muslims living in the UK today, making billions of contributions for the British economy, we are a huge population and we are a big voter sector that should be valued and respected. So whilst I welcome Prime Minister Boris Johnson apologising, I also give credit to the Conservative party, because they were the party in government who introduced Sharia law finance for Muslim communties, so if they have managed to do that, I am sure they can manage to address the Islamophobic behaviour,” says Rabina.

For British Muslims and people of colour, hate crimes against minorities have become a new normal in the country. Many have chosen to leave the United Kingdom as it has become “too dangerous to stay”. Hate crimes have now been extended to Britain’s East and Southeast Asian communities as well, which has seen a 300-percent increase since the UK was placed under its first lockdown due to the coronavirus surge across the country.

These negative characterizations of minority groups in the United Kingdom perpetuates the view that minority groups embody the most extreme ‘other’ characteristic traits, or that they are a risk to national security due to dangers associated with inherent radicalisation or in the case of Islamophobia, that muslim voices of resistance are untrustworthy.

Whether it is Islamophobia, Xenophobia, hate crime against different communities or normalization of Islamophobia by politicians in the United Kingdom, all of it raises multiple questions whether they are simply a manifestation of a deeply rooted anti-immigrant and anti-refugee sentiment in British politics. If so, then it is high time Britain changes its political culture and discourse and moves towards becoming an inclusive society that it was, atleast until a few years ago.

Prejudices, biases and political underrespresentation of ethnic minorities have often been used as a political tool during elections, but a government’s progress or a political leaders progress is determinded not just based on apologies issued for ‘past comments on Islam’, but on the overarching actions taken to ensure equality, inclusivity and mechanisms put in place to protect against such attacks or statements in the future, which should be considered not just offensive, but also an offence. Britain must fix it’s Anti-muslim sentiment problem and do it without othering the community and it’s people. As Rabina says, “double standard is a structural inequality that perpetuates bigotry, racism and Islamophobia.”