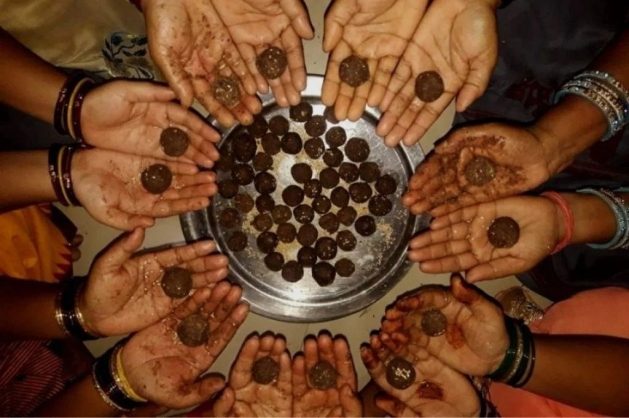 Millets, which grow well in rain-fed regions such as Chhattisgarh, used to be a mainstay for household cultivation and consumption. Credit: Picture courtesy - Neeraja Kudrimoti.

Sep 17 2021 (IPS) - Chhattisgarh was one of the first few states in the country to universalise the public distribution system (PDS) and provide ‘Right to Food’ to its people. In order to ensure access to quality foodgrains for its vulnerable population, the state introduced the Food Security Act in 2012. The state has been providing support—35 kg of rice at INR 1 and INR 2 per kg; 1 kg of iodised salt and 1 kg refined oil at no cost; 2 kg of grams at INR 5 per kg—to each eligible family (as defined in the act).

Despite these efforts and others by the state, the statistics on nutrition for children and women in Chhattisgarh, almost a decade since the act, look grim. According to the latest data released by the Ministry of Health and Family Welfare, 40 percent of children below the age of five are underweight and 41.6 percent of girls and women are anemic.

Promoting millet cultivation and consumption can be one way to improve nutritional outcomes. The focus on millets stems from the history and significance of millet cultivation in the region, the crop’s nutritional value, its ability to grow well in Chhattisgarh’s climate, and its impact on improved agro-biodiversity

While several factors—access to quality food and health care, livelihood opportunities, and context-specific vulnerabilities—impact health and nutrition outcomes, this piece specifically looks at how promoting millet cultivation and consumption can be one way to improve nutritional outcomes. The focus on millets stems from the history and significance of millet cultivation in the region, the crop’s nutritional value, its ability to grow well in Chhattisgarh’s climate, and its impact on improved agro-biodiversity.

A brief background on cultivation practices in Chhattisgarh

Eighty percent of Chhattisgarh is largely dependent on agriculture, which is mainly rain-fed. Additionally, there is a widespread culture of monocropping—growing a single crop every year after year, on the same land. The state is known as the rice bowl of India, as it mainly grows paddy (or rice) under monocropping.

This wasn’t always the case. Over the years, there has been a marked shift towards the cultivation of rice. The Green Revolution, which introduced the use of high-yield seed varieties and chemical fertilisers to boost the production of wheat and rice, played a big role here.

Since then, there has been a push to expand the areas under cultivation through the use of hybrid paddy seeds, and to invest in research and development around the cultivation of paddy. And in 2019, the Government of Chhattisgarh promised its farmers a minimum support price of INR 2,500 per quintal of paddy, thereby encouraging them to focus on rice. The PDS becoming predominantly rice-oriented has also contributed to farmers shifting towards growing paddy. Over time, monocropping has damaged the soil’s nutrient diversity and has led to increased crop vulnerability and dependency.

Prior to the Green Revolution, rice, millets, sorghum, wheat, maize, and barley were the major crops produced. The production of rice and millets was higher than the production of wheat, barley, and maize combined. Many of the indigenous varieties used for cultivation, especially for millets, have been lost. The traditional farming and dietary practices were more aligned with the climate conditions of the region. Millets in particular, which grow well in rain-fed regions such as Chhattisgarh, used to be a mainstay for household cultivation and consumption.

Nutritionally, millets are high in protein, vitamins, and minerals. They are one of the highest sources of natural calcium. Older generations of tribal households talk about how a drink made from millets, called ragi pega—ragi cooked in hot water—was especially helpful. The drink kept them full and energised for long periods of time, especially when they had to spend hours, sometimes days, in the forest collecting produce.

Additionally, diets that heavily rely on cereals (such as rice) and pulses—which are heavily subsidised by the government under the current system—can lead to deficiencies in micronutrients such as iron, zinc, calcium, vitamins, and more.1 Therefore, promoting millet cultivation and consumption in the region can help combat issues of malnutrition, especially micro-nutrient deficiencies among children and women in the state.

Cultivating millets is also useful because they are better for the environment. They have a lower water footprint, are climate-smart crops, and are climate-resilient. Moreover, they are ‘farmer-friendly’ because they require a very low input cost. In Chhattisgarh, 21 out of 28 districts are water-scarce. This, coupled with climate change, erratic rainfall, and continued cultivation of water-intensive crops will eventually affect productivity and production, which in turn will affect food availability and price variations. In the long run, this will have an adverse impact on food security in the region.

Where are millets now?

Today, tribal households cultivate small quantities of millets, mainly for household consumption, using home-preserved seeds and traditional cultivation methods. Culturally as well, millets are used as offerings to deities or to hang millet cobs in homes on auspicious occasions. Despite the benefits of millets to both farmers and the environment, the crop has not been commercially produced since it has almost no supporting policies or markets.

Today, the area under paddy cultivation is 27 lakh hectares, almost 27 times more than the area under millet cultivation (1 lakh hectares). The Government of Chhattisgarh procured a record-breaking volume of paddy, worth INR 20,000 crore, at the minimum support price (MSP) in FY 2020-21. On the other hand, millets—which are far more nutritious, farmer-friendly, and planet-friendly smart crops—were not procured at all.

Although the state has made some efforts to increase millet cultivation, there was a shortage of seeds under various government schemes for the cultivation of millets. Further, local or indigenous seed varieties have been excluded from these schemes. Given that dietary staples may typically constitute 70 percent of a meal, and are often eaten three times a day, diversifying these staples can have a huge impact on health and nutrition. It would also address the impacts of climate change and environmental degradation, as well as the socioeconomic and political factors that influence food patterns, choices, and access.

What needs to be done?

1. Develop an integrated ecosystem
The government of Chhattisgarh has declared procurement at MSP for ragi and kodo and kutki (little millet). However, there is also a need to adopt a comprehensive and integrated ecosystem involving multiple stakeholders—farmers, middlemen, households, markets, government, community-based organisations, and nonprofits. This would entail government support on several fronts—increasing production, promoting household consumption, developing a decentralised processing infrastructure, and developing the local market for millets. The government must also include millets in the PDS, by making them available at local Fair Price Shops.2 This will ensure that there’s diversity in the staples available—currently, only rice and chana (bengal gram) are supported.

2. Land reforms
Ragi, kodo, and kutki should also be integrated into land reforms aimed at shifting to a multi-cropping system, in a traditionally rice-growing state.

3. Processing, infrastructure, and transportation support
Millet cultivation is mostly undertaken by indigenous groups who are scattered across the Bastar region of south Chhattisgarh, and the Sarguja area in north Chhattisgarh. Processes that aid drudgery reduction, produce aggregation, and shortening the local value chain should be encouraged. Such support, especially for small and marginal farmers, communities that benefit directly from the Forests Rights Act (FRA), and Particularly Vulnerable Tribal Groups, will help them bring their produce to procurement or aggregation centers.

4. Strengthen insurance for farmers cultivating millets
Insurance products should also be linked to millet production to provide a safety net, especially at the beginning of the production cycle. This will ensure that farmers are protected against losses during the initial shifting of cultivation to millets, and until production stabilises.

5. Increase consumption of millets
There is a need for formal linkages to welfare schemes, specifically those related to supplementary nutrition. For example, linkages to local fair price shops in PDS, Anganwadis under Integrated Child Development Scheme (ICDS), schools under the Mid Day Meal Scheme (MDM), and tribal hostels under Integrated Tribal Development Agency Business, among others. Such linkages can help secure acceptance and behaviour change in the direction towards the consumption of millets.

6. Invest in research on millets
Investing in research on markets, consumption patterns, transportation and infrastructure support, and traditional crop varieties is essential. This will help build important knowledge around nutrition, quality food, access, capacity, and viability of millets in Chhattisgarh.

7. Capacity building
Building on farmers’ knowledge, strengthening capacity for crop planning, using suitable agronomic practices, and increasing access to tools, subsidies, and registration support for government procurement is crucial. Further, it is mainly women—who are not widely recognised as farmers—who currently cultivate and manage production. Therefore, it is important to develop sustainable livelihood and social support for them such as better access to land, information, capital, and so on.
8. Seed production and preservation techniques

Lastly, another gap that needs to be addressed is the lack of available agro-climatically suitable seeds in Chhattisgarh. Awareness programmes that target seed preservation techniques among the tribals and promote the cultivation of local varieties of millets should be introduced. This will address issues of agricultural biodiversity, climate change, and nutritional concerns.

Neeraja Kudrimoti worked as the state program officer for NITI Aayog’s Aspirational Districts Programme in Chhattisgarh. She was a Prime Minister’s Rural Development Fellow in Bijapur district, Chhattisgarh. Neeraja advises public sector enterprises as a member of the National Corporate Social Responsibility Hub at Tata Institute Social Sciences. She has worked with state and district administrations on health, nutrition, agriculture, gender, and rural development in conflict-areas of Chhattisgarh. Neeraja holds a MSc in Public Policy from University College, London.