Nov 25 2021 - On International Day for the Elimination of Violence Against Women (25 November), UNESCO is raising awareness for the continued violence, threats and harassment that women journalists and female media workers face all around the world.

Their safety is put at risk by offline and online attacks, ranging from violence, stigmatization, sexist hate speech, trolling, physical assault, rape to even murder. In addition to being attacked on the basis of their work as journalists, they are the targets of gender-based violence. These attacks seek to silence the voices of women journalists and threaten freedom of speech by interrupting valuable investigative work. They distort the media landscape by threatening diversity and perpetuating inequalities both in newsrooms and in societies.

To improve the safety of women journalists and to address the threats they face, UNESCO and its partners take effective measures through research, capacity-building and awareness raising.

During the 16 Days of Activism Against Gender-Based Violence, please help raise attention for the safety of women journalists. 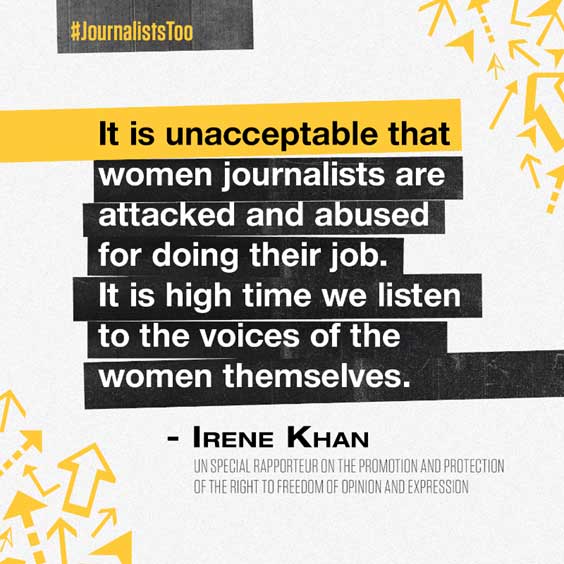 Irene Khan, Special Rapporteur on the Promotion and Protection of the Right to Freedom of Opinion and Expression publishes essay collection “#JournalistsToo – Women Journalists Speak Out”

On International Day for the Elimination of Violence against Women, Irene Khan, Special Rapporteur on the promotion and protection of freedom of opinion and expression, is publishing the essay collection “#JournalistsToo – Women Journalists Speak Out”, which chronicles personal experiences of harassment by eleven journalists from ten countries. The publication is supported by UNESCO and the Special Procedures of the Human Rights Council. The essays describe the many – often intersectional – threats women journalists face simply for doing their work. But they are not the stories of victims. Rather, they are testaments of courage, resilience, solidarity and the refusal to be silenced. As Irene Khan highlights, “It is unacceptable that women journalists are attacked and abused for doing their job. It is high time we listen to the voices of the women themselves”.

To improve the safety of women journalists, UNESCO, the International Women’s Media Foundation (IWMF) and the University of Texas at Austin’s Knight Center for Journalism in the Americas launched a Massive Open Online Course (MOOC), addressing the gender dimensions of journalists’ safety. Experienced instructor Alison Baskerville provides frameworks to mitigate and manage risks associated with reporting for women.

The course is available in English in a self-directed format and will soon be accessible in Spanish and French. 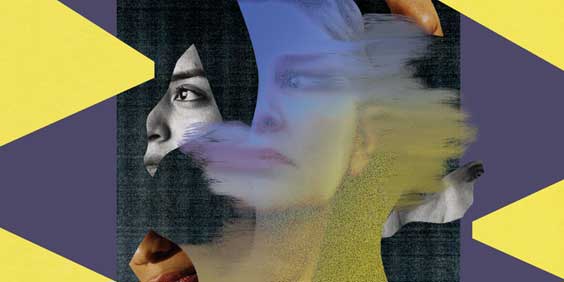 The UNESCO discussion paper “The Chilling: Global trends in online violence against women journalists” points to a sharp increase in online violence against women journalists and reveals how these attacks are inextricably bound up with disinformation, intersectional discrimination and populist politics. 73% of surveyed women journalists reported having experienced online attacks while 20% said they had been attacked or abused offline in connection with online violence. The study, conducted in cooperation with the International Center for Journalists (ICFJ), is unprecedented in its scope and methodology, with a global survey of 901 journalists from 125 countries. It also includes two big data case studies assessing over 2.5 million social media posts directed at prominent journalists Carole Cadwalladr from the United Kingdom and Maria Ressa – this year’s Nobel Peace Prize Laureate and winner of the 2021 Guillermo Cano World Press Freedom Prize – from the Philippines. 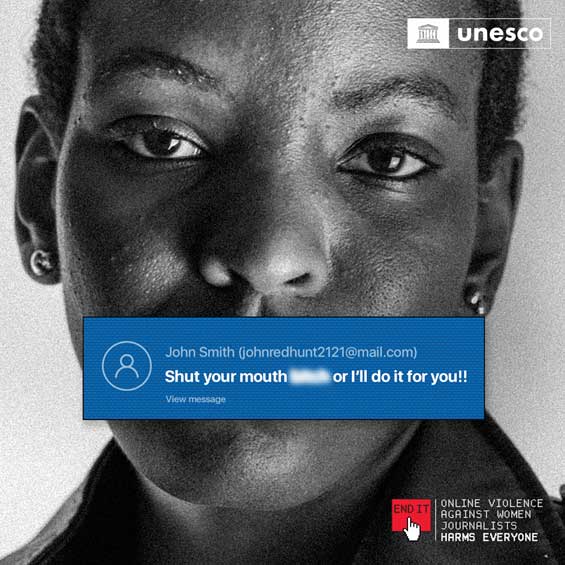 Online violence against women journalists harms everyone. Let’s end it!

When a women journalist is attacked online, she is not the only one that suffers. Online violence harms women’s right to speak and society’s right to know. To tackle this increasing trend, collective solutions are needed to protect women journalists from online violence. This includes strong responses from social media platforms, national authorities and media organizations.

During the 16 Days Against Gender-Based Violence, help us end online violence by sharing UNESCO’s campaign materials.