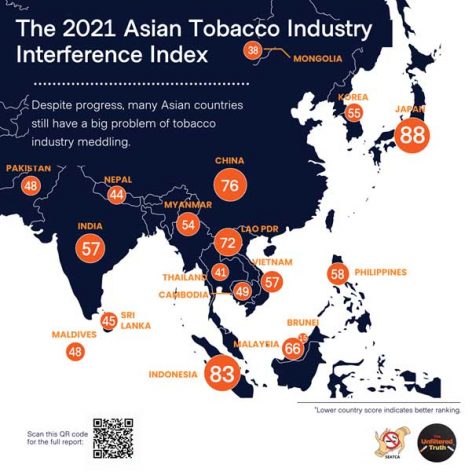 BANGKOK, Thailand, Dec 3 2021 (IPS) - Almost two years into the COVID-19 pandemic, many countries in the developing world continue to grapple with basic issues such as securing sufficient vaccines and providing essential medical care for their sick. Many economies are in recovery mode as governments scramble to resuscitate them with recovery packages and build back better plans.

In this mix, COVID-19 did not dent Big Tobacco’s profits as it exploited the pandemic and persuaded governments to treat cigarettes as “essential,” accept its charity, obtain perks such as tax breaks and treat new tobacco products more favorably. These were the main findings of the 2021 Asian Tobacco Industry Interference Index.

Although many countries in Asia, a target for Big Tobacco to grow its business, already reject tobacco industry gift-giving, health and non-health frontliners fell prey to its corporate social responsibility activities at the height of the pandemic. The industry doled out emergency medical equipment, hospital supplies, and cash and food provisions in areas under lockdowns.

As many governments limited the movement of non-essential tobacco to mitigate the spread of COVID-19, the governments of Bangladesh and the Philippines caved in to industry pressure and exempted the manufacture and sale of tobacco products.

In Bangladesh, British American Tobacco and Japan Tobacco International received special permission from business-friendly departments to continue purchasing tobacco leaf, manufacturing, and distributing finished goods while the country was under a nationwide lockdown.

The Philippines classified tobacco as non-essential and restricted its transport and delivery in areas under lockdown in March 2020, but eventually lifted the restrictions and announced that the tobacco industry could fully operate in areas under general community quarantine.

The Asian index shows that although nearly all countries included in the report are Parties to the global health treaty, the WHO Framework Convention on Tobacco Control (FCTC), many governments still deem the tobacco industry’s business as fiscally beneficial even at the expense of public health.

In Thailand, the date of repealing the ineffective two-tier cigarette tax rate was also extended for another year, while in India, Korea, Malaysia, and Nepal, no tax increase was announced for 2021.

In Indonesia, the government eased the tobacco excise tax scheme by extending the payment deadline, which allowed the industry to sell at old market prices, deprived the government of additional revenues, and sustained rather than discouraged tobacco use.

In Japan, where cigarette tax rates are already low, heated tobacco products introduced by Big Tobacco are taxed significantly lower. Similarly, in the Philippines, the excise tax rate on electronic smoking products is substantially lower than that for cigarettes.

The index quantifies industry meddling in 19 Asian countries and ranks governments according to their efforts in shielding public policies. While a few countries show marginal progress, many showed deterioration in addressing tobacco industry influence, primarily due to the industry’s more aggressive tactics that capitalized on the COVID-19 situation.

• Protective measures in tobacco control are still needed. Eight (8) countries are still unprotected from tobacco industry influence, while other countries still have room to strengthen enforcement of their protective measures.
• Tobacco industry continued rebuilding its image through CSR activities. The tobacco industry targets socio-economically vulnerable groups as CSR beneficiaries to disassociate its corporate image from its toxic products and irresponsible business practices. Brunei, Lao PDR, Maldives, Mongolia, Myanmar, Nepal, and Thailand have banned these activities as fake charities.
• Tobacco industry enjoyed government benefits such as waived duties, tax breaks, and subsidies. These deprived government of potential revenues for pandemic response or social services.
• Even when most social events and physical gatherings were banned, many government officials interacted unnecessarily with the tobacco industry.
• There is a systemic lack of transparency in disclosing government interactions with the tobacco industry. None of the countries have a registry to publicly disclose the tobacco industry’s affiliate organizations, individuals, or lobbyists acting on its behalf.

There is hope as some governments move to protect public policy from undue influence of the tobacco industry, such as India, whose Ministry of Health and Family Welfare adopted a code of conduct for its officials when interacting with the tobacco industry.

Cambodia’s Ministry of Education also introduced tobacco-free policies in educational facilities and banned any sponsorship or collaboration with the tobacco industry.

Philip Morris International reported pre-tax earnings of almost $11 billion for 2020, while British American Tobacco reported revenues of about $12 billion, primarily from cigarette sales. These figures are far more than the health budgets of poor countries and what they spend on tackling the pandemic.

Governments must strengthen their efforts to protect public health policy in the spirit of anti-corruption and good governance, as civil society continues to do its part to monitor, expose, and de-normalize this harmful industry and its products.