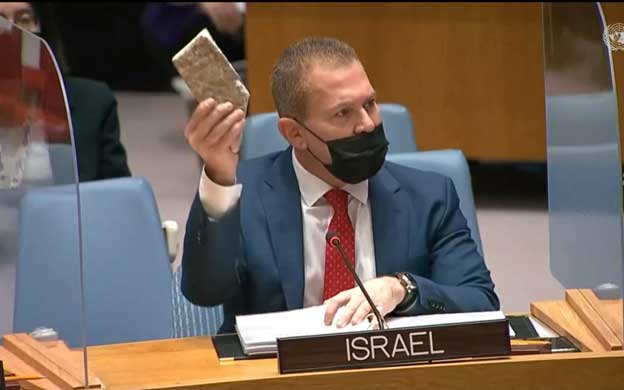 UNITED NATIONS, Jan 26 2022 (IPS) - When Israeli Ambassador Gilat Erdan made an unusual presentation before the Security Council last week displaying a large rock, which he claimed, was hurled at Israeli vehicles in the Occupied Territories, a reporter at a UN press conference asked whether Palestinians will be given the right of reply— by displaying in the Security Council chamber an Uzi sub- machine gun or a bulldozer deployed by Israeli armed forces against civilian demonstrations.

Stephane Dujarric, the UN Spokesperson, provided a diplomatically cautious response: “I’m not going to get into that… it’s not for me to speak.”

During a debate on January 19, Ambassador Erdan sharply criticized the “Security Council’s bias, and in particular, the Council’s utter disregard for Palestinian rock-throwing terrorism”.

To make it clear that rocks are life-threatening weapons, Ambassador Erdan presented the Council with a rock to illustrate what was happening on the roads of Judea and Samaria and Jerusalem, asking the participants “how they would react if a similar rock were thrown at their vehicles”.

In 2021, he said, “Israelis suffered 1,775 rock attacks by Palestinian terrorists in addition to thousands of missiles, shootings, stabbings, and car ramming attacks”.

Asked for his comments, Ian Williams, President of the Foreign Press Association in New York, told IPS having no sense of perspective is career plus for any Israeli representative at the UN.

“But Erdan seems to have forgotten his claimed history. King David felled Goliath with a stone and Erdan invites legitimate comparison between the Palestinian kids and the Israeli Goliath, poor and defenseless protected only by drones, missiles, planes and tanks from the rapacious stone throwers”.

Israeli ambassadors have been getting away with this risible posturing for too long, he added.

“It is time other delegates punctured their pretensions and challenged them – or just audibly hooted in derision”, declared Williams, a former President of the UN Correspondents’ Association (UNCA) and author of UNtold: The Real Story of the United Nations in Peace and War.

Dr Stephen Zunes, Professor of Politics and International Studies at the University of San Francisco, and coordinator of the program in Middle Eastern Studies, told IPS he “doesn’t recall stones ever being brought into a debate (in the UN Security Council), though there have certainly been props used before” (i.e., US Secretary of State Colin Powell’s vial of anthrax, when he addressed the Security Council in 2003 on information and intelligence he believed showed the possibility of weapons of mass destruction in Iraq, which eventually proved false).

“What I do find interesting is that the reporter chose to highlight the absurdity of a representative of a government– engaged in a foreign belligerent occupation which has been repeatedly cited for war crimes against the besieged population– would expect to be taken seriously in claiming they were justified in their repression out of fear of rocks,” said Dr Zunes, who is an authority on the politics of the UN Security Council and has written extensively on the UN’s most powerful political organ.

Dr Ramzy Baroud, a Palestinian author and editor of The Palestine Chronicle, told IPS Erdan was clearly aiming at creating a distraction from the horrific events transpiring in Sheikh Jarrah and throughout occupied East Jerusalem at the moment.

He said the Salhiya family’s home was demolished January 19, rendering 15 people, mostly children, homeless. A few days earlier, a heart-wrenching event took place, when members of the Salhiya family threatened to set themselves ablaze as they agonized over the imminent loss of their family home.

“These events are being watched closely, first by Palestinians but also by people around the world. If the momentum of Israeli destruction continues, chances are we could witness another popular uprising. Erdan’s spectacle at the UN on Wednesday is a desperate act of preemptive propaganda to sway members of the international community from criticizing Israel,” he noted.

“Moreover, criticizing Palestinian weapons, however primitive or destructive, engages Israel in a misleading conversation that creates a moral equivalence between the occupier and the occupied, the colonialist and the colonized.”

Whether Palestinians use a stone, a gun or a clenched fist to resist and to defend themselves, Dr Baroud argued, their resistance is morally and legally justifiable. Israel, on the other hand, like all other military occupiers and colonialists, has neither a moral nor a legal argument to justify its oppression of Palestinians, the destruction of their homes and the killing of their children.

“Judging by the growing solidarity with Palestinians at all fronts, it is clear that Erdan’s sorry display is another exercise of political futility,” he declared.

Meanwhile, the overwhelming Israeli firepower that continues to be unleashed on Palestinian militant groups in the longstanding battle in the Occupied Territories is perhaps reminiscent of the Algerian war of independence (1954-1962) when France, the colonial power, used its vastly superior military strength to strike back at the insurgents with brutal ferocity.

While France was accused of using its air force to napalm civilians in the countryside, the Algerians were accused of using handmade bombs hidden in women’s handbags and left surreptitiously in cafes, restaurants and public places frequented by French nationals living in occupied territory.

In one of the memorable scenes in the 1967 cinematic classic “The Battle of Algiers,” which re-created Algeria’s war of independence against France, a handcuffed leader of the National Liberation Front (NLF), Ben M’Hidi, is brought before a group of highly-partisan French journalists for interrogation.

One of the journalists asks M’Hidi: “Don’t you think it is a bit cowardly to use women’s handbags and baskets to carry explosive devices that kill so many innocent people [in cafes and night clubs]?”

Responding with equal bluntness, the Algerian insurgent retorts: “And doesn’t it seem to you even more cowardly to drop napalm bombs on unarmed villages on a thousand times more innocent victims?”

“Of course, if we had your fighter planes, it would be a lot easier for us,” he adds. “Give us your bombers, and you can have our handbags and baskets.”

Like the Algerian insurgents, Palestinian militants were not fighting on a level battle field – as the Israeli military keeps unleashing its massive firepower on a virtually defenseless population in the Occupied Territories.

On the looks of it, it was not a level battle field but an uneven killing field.

“Perhaps it would be interesting to see the roles reversed: the Palestinians with American fighter planes and battle tanks and the Israelis with homemade rockets,” says one Arab diplomat, striking a parallel with the Algerian insurgency.

In a statement released January 21, the Institute for Middle East Understanding (IMEU) said news in occupied East Jerusalem is rapidly escalating following Israeli police demolishing a Palestinian family’s home in Sheikh Jarrah on January 18 at around 3 AM local time. Along with demolishing the Salhiya family’s home, Israeli police arrested and beat several members of the family, including a 9-year-old-girl. Israel has even banned the family from returning to the neighborhood for 30 days.

Several members of Congress have spoken out against the recent home demolition in Sheikh Jarrah. Congresswoman Marie Newman tweeted, “15 Palestinians were left homeless after Israeli police evicted them in the middle of the night and demolished their homes in Sheikh Jarrah. This is one of more than 1,000 evictions or demolitions in the area since 2016. This must end.”

Congresswoman Alexandria Ocasio Cortez expressed her dismay about Israel’s ongoing human rights abuses, including the recent killing of 80-year-old US Palestinian citizen Omar Abdalmajeed Assad, who was arbitrarily detained, beaten and, according to eyewitness, left unresponsive by Israeli soldiers while driving to his home in the occupied West Bank.

This article contains extracts from a newly-released book on the United Nations titled “No Comment – and Don’t Quote Me on That.” The link follows: https://www.rodericgrigson.com/no-comment-by-thalif-deen/