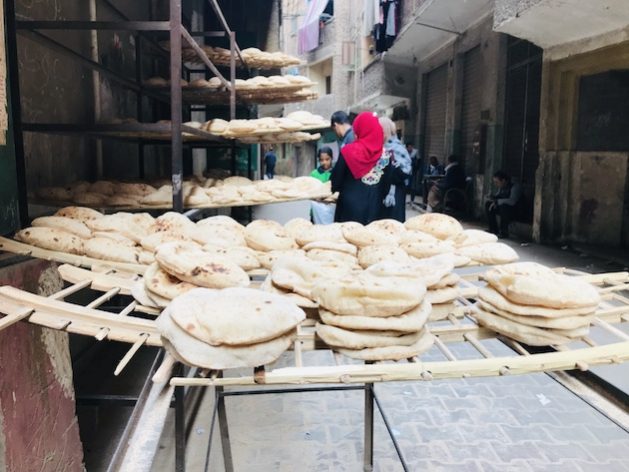 The crisis in Ukraine has put Egypt’s wheat supply in jeopardy and could impact millions who rely on subsidised bread. Credit: Abdelfatah Farag/IPS

CAIRO, Mar 3 2022 (IPS) - Egypt is scrambling to find alternate sources of wheat after the Russian invasion of Ukraine has put supply to the country in jeopardy. This is especially urgent because the price of bread in Egypt has in the past sparked protests in the country.

Russia and Ukraine are key players in the global grain market, with their wheat exports accounting for 23% of international trade in 2021-22, according to the US Department of Agriculture.

Egypt, Lebanon, and Libya are among the MENA region’s top wheat importers from Ukraine.

Over the last 50 years, the price of bread has been a politically controversial topic in Egypt, triggering various protests. A subsidised flat loaf costs 0.05 Egyptian pounds, less than one US cent.

Naguib Sawiris, the Egyptian tycoon, appealed to Egypt’s Minister of Supply on February 22 to acquire and store large quantities of wheat.

“We must purchase and stockpile wheat as quickly as possible before the Ukraine-Russia war breaks out, “Sawiris Tweeted.

Mohamed Elhady, who runs a family-owned bakery at Menoufia Governorate, 80 km north Cairo, is deeply concerned about the business he has been running for 20 years.

“The government-subsidised bread diminishes the bakery’s profit margin since we are required to sell a loaf of bread at the government-set price. But we get the cost difference through banks after calculating the number of loaves produced by each bakery using a smart ration card system,” Elhady told IPS.

“Some bakeries gather cards from ordinary residents and report fictitious sales to gain the value of subsidised bread for themselves, increasing their earnings considerably while reselling raw wheat on the informal market,” he explains.

In August 2021, Egyptian President Abdel Fattah al-Sisi said it was time to increase the country’s subsidised bread price, revisiting the issue for the first time since 1977, when then-president Anwar Sadat reversed a price rise in the face of riots.

“It is time for the five-piece loaf to increase in price,” Sisi said.

Elhady believes that the government will turn the president’s words into action soon, expecting that the new increase in subsidised bread will take place by April, the anticipated time for receiving wheat from the new suppliers. This will decrease daily production rates and, therefore, his profits.

“Once the wheat prices increase, the government will reduce the number of subsidised loaves from five a day to three or increase the price of the 5-piaster loaf,” Elhady says.

The president is also expected to exclude more citizens from the subsidy programme covering more than 60 million Egyptians.

“People will have to choose; to eat less or to pay more,” Elhady adds.

Egypt’s main state buying agency, the General Authority for Supply Commodities (GASC), has issued a second international wheat tender to import wheat from April 13 to 26. The tender was issued 48 hours after it was cancelled because it only received a single offer of French wheat. A least two offers are required before a purchase can go ahead.

The Egyptian GASC set the end of February as a deadline to receive offers for the new tender. In addition to Russia and Ukraine, the GASC sought bids from the United States, Canada, France, Bulgaria, Australia, Poland, Germany, the United Kingdom, Romania, Serbia, Hungary, Paraguay, and Kazakhstan. The delivery needs to take place before April 1, 2022.

Despite the ongoing Russian-Ukrainian military escalation, an Egyptian ship carrying 60 tons of Ukrainian wheat has left the Ukrainian ports and is en route to Egypt, a grain consultant at the Ministry of Supply, Salah Hamza, told IPS.

“This shipment was contracted with Ukraine for $361 per ton in an international tender in December 2021. The consignment is part of a 300 000-ton wheat shipment that will arrive by March 2022.”

“Egypt produces 275 million loaves of bread per day, consumes 900,000 tonnes of wheat per month, and the strategic stock is enough for the next five months, in addition to 4 million tons expected from the domestic harvest by mid-April, “Hamza adds.

Egypt has a strategic reserve of wheat, enough to cover the local market’s needs for nine months, the Cabinet’s spokesman, Nader Saad said.

The strategic wheat stock is approximately five million tonnes, according to Saad, and will be augmented when the local wheat harvest season begins on April 15.

In February of this year, the price of an ardeb of wheat climbed by 65 percent compared with February of last year.