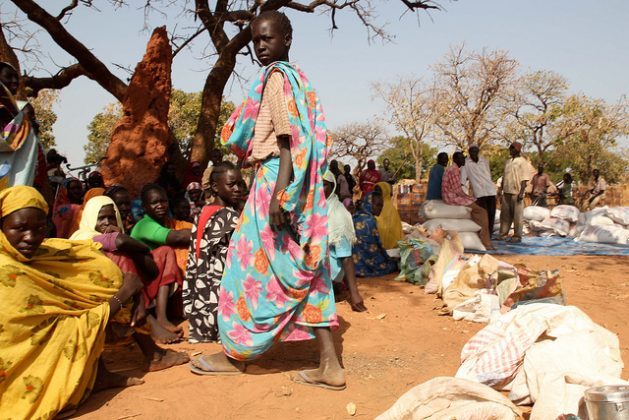 Widespread sexual violence against women and girls in conflict is being fueled by systemic impunity, the United Nations Commission on Human Rights in South Sudan reports. Credit: Jared Ferrie/IPS

MADRID, Mar 29 2022 (IPS) - While several politicians -and media– have been viewing the ongoing armed conflict in South Sudan as a “civil war” between rival ethnic groups, so nothing to worry about, there are some key facts that should be considered for the sake of having a wider, more accurate panorama. One of them is that this country is rich in oil.

Many politicians and media have also been blaming the widespread corruption as one main cause of South Sudanese inhumane living conditions while ignoring the evidence that if there are corrupt it is because there are “corruptors.”

Meanwhile, the armed conflict in South Sudan has been having tragic consequences. Women and girls are taken as “war trophies,” subjected to mass rape, forced pregnancy, torture, slavery and a long list of brutalities. In the meantime, the country is rapidly bracing for a devastating famine.

A bit of background

South Sudan is the youngest State in the world. It was born in 2011, following accusations of war crimes committed by the then regime of Sudan’s Omar Al Bashir, who served as the seventh head of state of Sudan under various titles from 1989 until 2019, when he was deposed in a coup d’état.

This young State was an integral part of Sudan since the British Empire and European powers distributed the world between themselves during the long era of European colonialism which lasted from the 15th to the 20th centuries. During that period, European powers vastly extended their reach around the globe by establishing colonies in the Americas, Africa, and Asia.

There is oil down there!

Anyway, South Sudan is home to oil reserves, representing more than 80% of the total oil stocks of Sudan, to which it belonged until its precipitated declaration of independence in 2011.

The country ranks third in oil reserves in Sub-Saharan Africa with an estimated 3.5 billion barrels produced annually. However, it is also estimated that 90 percent of its gas and oil reserves are still untapped.

See what Alan Boswell, of ‘The International Crisis Group,’ an independent organisation working to prevent wars and shape policies that will build a more peaceful world, reported on February 2022:

“Oil then laid the groundwork for South Sudan’s secession. A landmark 2005 peace deal granted Juba half of the South’s oil revenues, pumping billions into the new semi-autonomous government.

“But the sudden wealth gravely compromised the country’s stability. By 2013, only two years after independence, the elite scramble for South Sudan’s oil riches helped trigger a fresh war that may have killed 400,000 people while displacing millions.

“Nowadays, despite a 2018 peace agreement and a government of national unity, Juba’s monopoly on oil revenue obstructs a broader political settlement the country desperately needs.

“South Sudan’s leaders siphon off the bulk of the petrodollars, leaving much of the population starved of basic services and, in some parts of the country, on the brink of famine.”

‘Hellish existence’ for women and girls

Meanwhile, widespread sexual violence against women and girls in conflict is being fueled by systemic impunity, the United Nations Commission on Human Rights in South Sudan reported on 21 March 2022.

The Commission’s report, based on interviews conducted with victims and witnesses over several years, describes a “hellish existence for women and girls”, with widespread rape being perpetrated by all armed groups across the country.

According to the UN Commission, sexual violence has been instrumentalized as a reward and entitlement for youth and men participating in the conflict.

The goal is to inflict maximum disruption of the fabric of communities, including through their constant displacement, the report continues.

Rape is often used as “part of military tactics for which government and military leaders are responsible, either due to their failure to prevent these acts, or for their failure to punish those involved”, the Commission advanced.

“There, women are taken as ‘spoils of war, a ‘trophy’ for armed men.”

On this, the UN Human Rights Council, in its 49th session (28 February–1 April 2022), has included in its agenda the conflict-related sexual violence against women and girls in South Sudan.

Conflict-related sexual violence against women and girls is widespread and systematic throughout South Sudan. Ongoing conflict across the country has created a perilous situation of great insecurity for women and girls, exacerbated by a lack of accountability for sexual and gender-based violence, says the Council summary document.

The Human Rights Council’s paper explains that sexual violence in South Sudan has been instrumentalized as a ”reward and entitlement” for youth and men participating in the conflict.

“… The objective being to inflict maximum disruption and the destruction of the fabric of communities, including through their constant displacement. This scourge has had the most profound impact on victims, their families and communities.”

“Widespread and pervasive, conflict-related sexual violence against women and girls in South Sudan takes place in the context of persistent conflict and insecurity, drastic gender inequity, and prevailing impunity, which exacerbate its prevalence and contribute to its normalisation.”

Conflict-related sexual violence in South Sudan, it adds, has been instrumentalised to destroy the very fabric that binds communities, and as a strategy to displace, terrorise and humiliate civilian populations. This sexual violence is linked to the political and ethnic divisions at the heart of these conflicts.

“Sexual violence is used to humiliate and force opponents to leave a given territory, and thereby plays a critical role as one of the instruments of ethnic displacement.”

Such brutal violence and injury, the study goes on, take place in a context of pervasive poverty and extreme gender inequality, reflected in high rates of sexual and gender-based violence outside of conflict, a lack of women’s participation in political and public life, high rates of girl children being subjected to early or forced marriage, the lack of access by women and girls to livelihoods, and poor health outcomes that rank amongst the lowest for women and girls globally.

“The experiences of women and girls subjected to sexual violence in conflict cannot be isolated from wider political violence, which typically involves brutal violations and abuses perpetrated by armed men against civilians, including killings, abductions, torture and forced displacement.”

Bodies reduced to ‘spoils of war’

The United Nations Commission on Human Rights in South Sudan report also adds that “It is outrageous and completely unacceptable that women’s bodies are systematically used on this scale as the spoils of war,” as declared by Yasmin Sooka, Chair of the UN Commission.

Sexual violence survivors have detailed “staggeringly brutal and prolonged gang rapes” perpetrated against them by multiple men, often while their husbands, parents or children have been forced to watch, helpless to intervene.

“Women of all ages recounted being raped multiple times while other women were also being raped around them, and a woman raped by six men said she was even forced to tell her assailants that the rape had been “good”, threatening to rape her again if she refused.”

Bracing for ‘worst hunger crisis ever’

More than 70 percent of South Sudan’s population will struggle to survive the peak of the annual ‘lean season’ this year, as the country grapples with unprecedented levels of food insecurity caused by conflict, climate shocks, COVID-19, and rising costs, the UN’s World Food Programme (WFP) in 11 March 2022 warned.

While global attention is focused on Ukraine, said WFP, a “hidden hunger emergency” is engulfing South Sudan with about 8.3 million there – including refugees – facing extreme hunger in the coming months.

As the 2022 lean season peaks, food becomes scarce and provisions are depleted, according to the latest findings published in the 2022 Humanitarian Needs Overview.

“Particularly at risk are tens of thousands of South Sudanese who are already severely hungry following successive and continuous shocks and could starve without food assistance.”

Meanwhile, the oil business goes on.