On Feb 26, Russia vetoed a UN Security Council resolution that would have demanded Moscow immediately stop its attack on Ukraine and withdraw all troops, a move several Council members said was deplorable, but inevitable. While 11 of the Council’s 15 members voted in favour of the text, China India, and the United Arab Emirates abstained. Credit: United Nations

USSR Ambassador to UN transmitted to the UN Secretary-General a letter from President of the Russian Federation stating that:

Without presenting new credentials. USSR Ambassador to UN continued serving as the first Permanent Representative of the Russian Federation to the United Nations. 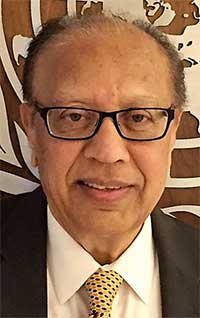 Since its inception, the United Nations has resorted to all kinds of measures, practices, and procedures to circumvent the complexities of an intergovernmental decision-making and legal implications, heavily influenced by the position or opposition of the five permanent members of the Security Council.

As a result, acquiescence in its various manifestations has become all pervasive in the business of the United Nations. A clear manifestation of that is practiced these days through what is known as “silent procedure” whereby the reluctant acceptance of Member States of all kinds of anomalies achieve an agreement or consensus otherwise not possible.

The Russian veto on the Ukraine resolution in the Security Council prevented unanimous global resolve to address the situation there. The continuation of veto is an aberration of the multilateral system as practiced in the UN Security Council, thereby jeopardizing all the positive UN efforts to maintain international peace and security.

The war in Ukraine has reaffirmed more clearly than ever that the “global ideological struggle” that had for so long dominated the international scene does not exist anymore. And the new realities must be translated into a different set of global institutions unless the existing one undertake major and all-pervasive reforms of their decision-making and operational practices and procedures.

The expulsion or suspension of one of the five veto-wielding permanent members would not necessarily result in effective maintenance of the global peace and security. There would still be four others with the ability to deny any time a consensus decision with which any one of them does not agree.

The chief culprit in the failure of unified global action by the UN is the continuation of the irrational practice of veto. As a matter, I have said on record that, if only one reform action could be taken, it should be the abolition of veto. Believe me, the veto power influences not only the decisions of the Security Council but also all work of the UN, including importantly the choice of the Secretary-General.

I believe the abolition of veto requires a greater priority attention in the reforms process than the enlargement of the Security Council membership with additional permanent ones. Such permanency is simply undemocratic. I believe that the veto power is not “the cornerstone of the United Nations” but in reality, its tombstone.

Unlike the question of the replacement of USSR membership by the Russian Federation in 1991, the case of the recognition of the People’s Republic of China (PRC) by the UN is straightforward.

It was decided by the apex body of the UN system, the General Assembly in its groundbreaking resolution 2758 titled “Restoration of the lawful rights of the People’s Republic of China to the United Nations” which was adopted by two-thirds majority on 25 October 1971 in accordance with the UN Charter.

Over the years, Taiwan’s efforts to revive the application for UN membership separately for itself has received no support of the UN membership in general.

“…regarding the Taiwan Province of China, the Secretary-General follows the General Assembly’s guidance incorporated in resolution 2758 (XXVI) of the General Assembly of 25 October 1971 on the restoration of the lawful rights of the People’s Republic of China in the United Nations. The General Assembly decided to recognize the representatives of the Government of the People’s Republic of China as the only legitimate representatives of China to the United Nations. Hence, instruments received from the Taiwan Province of China will not be accepted by the Secretary-General in his capacity as depositary.”

It is relevant to recall that in 2007, Secretary-General of the UN Ban Ki-moon rejected Taiwan’s membership bid to “join the UN under the name of Taiwan”, citing Resolution 2758 as acknowledging that Taiwan is part of China, although it is important to note, not the People’s Republic of China.

Why not amend the Charter

I have confronted on many occasions the question why Russia and PRC have not called for an amendment of the UN Charter to streamline their membership issue. For that, my opinion is that all Permanent Members are fully cognizant that that would open up a Pandora’s box, including the issue of abolition of veto and other reform issues which are not at all to their liking as part of the P-5 coterie.

Ambassador Anwarul K. Chowdhury, is Former Permanent Representative of Bangladesh to the UN; President of the UN Security Council (2000 and 2001); Senior Special Adviser to UN General Assembly President (2011-2012) and Former Under-Secretary-General and High Representative of the UN.