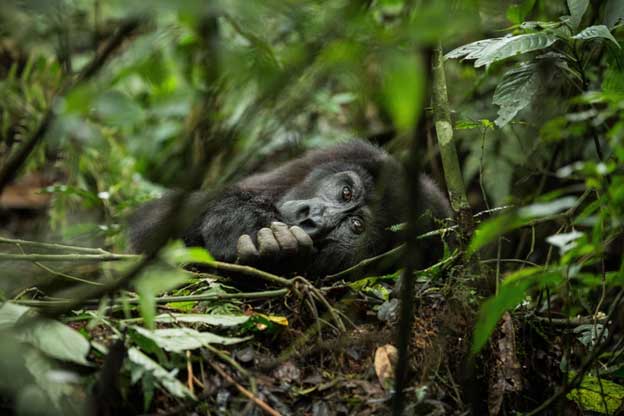 During the last couple of decades, the mountain gorilla population in Bwindi Impenetrable National Park has steadily increased to more than 400. Credit: UNEP / Kibuuka Mukisa

CAPE TOWN, South Africa, Apr 5 2022 (IPS) - On the battleground that has become African wildlife conservation, rural communities find themselves in the middle of a tug-of-war that is bound to the past on one side, and their future, on the other.

And judging from political developments in former colonial power, Britain, these communities – the custodians of wildlife in several southern African countries – are holding fast in their fight to secure a future in which the power to use their natural resources for their own good, rest firmly in their hands.

The UK government intends passing anti-hunting legislation containing a ban on British hunters bringing their trophies home. For African communities that rely on so-called trophy hunting as a major source of income, such bans not only undermine their right to sustainably use and manage their wildlife, which includes hunting, to their benefit but also threaten their livelihoods.

And there’s evidence, as in the case of Kenya, that they harm conservation as well.

According to reports, the government no longer intends to introduce its Animals Abroad Bill in the current parliamentary session, citing a lack of parliamentary time. Similar planned legislative restrictions in the United States, intended to undermine hunting tourism in Africa, have also failed to materialise. There also now appears to be legislation proposals with a similar objective in the making in Italy and Belgium.

The hunting trophy import ban represents a conflict between two distinct schools of thought on conservation. One is an approach supported by African governments’ policies and international conservation authorities, which holds up the sustainable use of natural resources practices by hundreds of communities across several African countries.

The other, which has become increasingly popular in western nations and urban areas where people no longer have a direct link to the natural environment, holds animal rights and welfare as paramount, even to the detriment of the rights and welfare of the people responsible for the conservation of that wildlife.

While the legislative attempts in the UK, US and possibly now Europe as well, aimed at curbing so-called trophy hunting in Africa might reflect current Western notions of animal rights, they are way out of touch with current African thinking, international conservation bodies and treaties.

This broader view takes cognisance of the key role that indigenous people and local communities play in conserving their environment, and how ignoring their rights and customs has contributed to our current environmental crisis.

Rights that have been won the hard way are not easily relinquished. Current African governments that have successfully overturned colonial laws in favour of their citizens can therefore be expected to strongly resist all attempts to undermine these policies.

In the field of conservation, these policies include recognising the rights of rural African communities to use their wildlife sustainably. Sustainable use includes developing wildlife-based industries – including hunting and photographic tourism – that links these communities with global, high-value markets for African wildlife.

Colonialism decimated traditional systems, which existed for centuries, in which African communities lived with wildlife and used it in sustainable ways. These people suddenly became poachers of animals that overnight were no longer their property to use freely anymore.

Restoring the rights of rural communities to their natural resources is by no means straightforward. Many communities have been displaced from their former territories and in some cases need to rebuild their social and cultural norms and learn to work within modern policy frameworks.

Traditional relationships with nature have been disrupted as a consequence of historical upheavals and modern urbanisation trends. Community-based natural resource management (CBNRM) is therefore a journey that communities and southern African governments have embarked upon in post-colonial era, towards the future of African conservation. Given the complexities of modern-day Africa, this journey will not be short or easy.

These devolution of rights efforts were given a recent boost from the African Union’s human rights agency, the African Commission on Human and Peoples’ Rights, in the form of Resolution 489, which calls on African states and non-state actors to both recognise and support the rights of local communities to manage and use their resources sustainably.

This resolution was taken within the context of the African Charter on Human and Peoples’ Rights that affirms the rights of all peoples to “freely dispose of their wealth and natural resources” (Article 21) and their right to “economic, social and cultural development with due regard to their freedom and identity” (Article 22).

This hand of support comes at a time when this concept is being threatened on many fronts. The Namibian CBNRM programme, as the most advanced of its kind on the continent, has become a special target for those who seem to prefer the former colonial methods of animal protection that were imposed on Africans.

Similarly, the proposed anti-hunting legislation in the UK and the US focused on animal protection, while ignoring the rights of local communities to practice their approach to conservation.

The over-emphasis on hunting caused by this ideological battle detracts from the real issues that need to be urgently addressed if conservation in Africa is to succeed. As expressed by the International Union for the Conservation of Nature (IUCN), the global authority on the status of the natural world and measures needed to safeguard it, world authority and the African Commission, local communities are in desperate need of support from all stakeholders, especially in the wake of COVID-19.

Rather than poking holes in community conservation efforts or trying to impose romanticised ideas about animals on people living with wildlife, time and money would be far better spent on finding solutions to the many challenges faced by rural people.

Ultimately, the future of African wildlife will be determined by African people – especially those living in rural areas. These communities have faced human rights abuses and marginalisation for decades, so it behoves all state and non-state actors to provide the kind of support they need to fully exercise their rights.

Further, none of these supporting stakeholders should dictate how these rights should be exercised, but rather create an enabling environment that allows for democratic, informed decision-making at the lowest possible levels of governance.

Rather than opposing African nations that have active hunting industries, global North could become true partners in African conservation by supporting community conservation efforts. While African states must heed the call of Resolution 489 by enacting and implementing their own community conservation policies, this would be easier if the UK, the US and other governments supported them in these endeavours.

Given the current environmental crisis and the history of colonialism in Africa, creating barriers to community-based conservation is both counter-productive and unjust. Despite its many detractors, African community conservation is here to stay.

The only question that external stakeholders must answer is: Are you willing to put aside ideology in order to support African communities conserve their wildlife for the good of us all?

Leslé Jansen is CEO of Resource Africa Southern Africa, an NGO that supports rural African community efforts to secure their rights to access and sustainably use their natural resources in order to sustain their livelihoods.