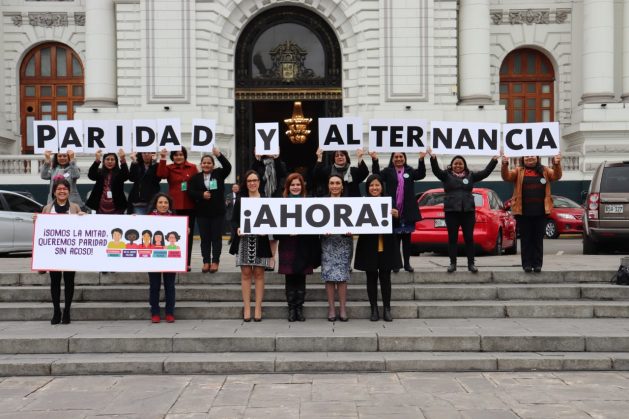 Members of the “We are half; we want parity without harassment!” campaign stand outside Congress in Peru in 2018, in a demonstration advocating laws such as the one passed in 2020 on parity in political participation or the 2021 law that combats harassment and violence against women politicians. Spokesperson Elizabeth Herrera holds one side of the poster on the far right in the top row. CREDIT: Courtesy of the campaign

LIMA, Apr 25 2022 (IPS) - Women entering the political arena in Peru face multiple obstacles due to gender discrimination that hinders their equal participation, which can even reach the extreme of political harassment and bullying, in an attempt to force them out of the public sphere.

“Women elected officials at the regional or municipal level only last one four-year term,” Elizabeth Herrera, spokeswoman for the “We are half, we want parity without harassment!“ campaign, told IPS in an interview. “After that, they’re not interested anymore, they feel that the system has expelled them.”

The campaign is a civil society initiative promoted by feminist organizations such as the Manuela Ramos Movement and the Flora Tristán Center in alliance with the National Network of Women Authorities (Renama), which has been a driving force for important advances for women’s political participation without discrimination, such as the Parity and Alternation Law, in force since July 2020.

Herrera, a 36-year-old political scientist, said women in politics face a number of hurdles. “They don’t give you the floor, they slander you, they attack you on social networks, there is physical and even sexual violence, which leads you to say, I don’t want to be here anymore, what’s the point,” she said.

A report by the National Jury of Elections – the country’s electoral authority – found that 47 percent of women experienced political harassment in Peru’s presidential and legislative elections in 2021, while in the last regional and municipal elections, in 2018, the percentage was 69.6 percent.

The harassment and bullying come from both within the same party and from other parties. “If you are a female authority, the adversaries seek to expel you from the decision-making spaces, they do not want to see us there, as historically we have not been present; they tell us that it is not for us,” Herrera said.

She added that many fellow party members also harass their women colleagues, to prevent them from competing for positions in the organization or for candidacies.

“We have seen cases in which documents are hidden from them, they are insulted, and this comes on top of the online harassment through the social networks, which is brutal,” she said.

She mentioned the case of a woman authority in the Puno region, in Peru’s southern Andes highlands, who feels terrible guilt because she believes that her son took his own life due to the systematic harassment against her.

The pressure suffered by the women is so great that the campaign must request their authorization to make their cases public. “Not all of them want to speak out because of the intimidation and harassment from the members of their own parties,” she said. 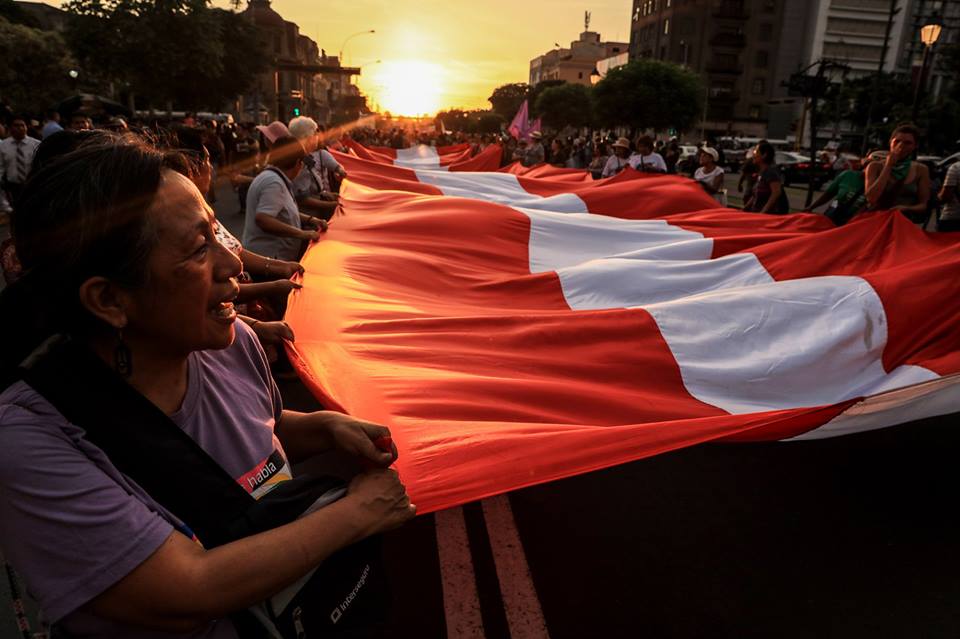 Peruvian women make up half of the population and the electorate but are underrepresented politically and in elected office. Meanwhile, those who decide to participate in politics endure a combination of discrimination and harassment aimed at driving them out of politics. The photo shows protesters in Lima holding a national flag, demanding greater female participation. CREDIT: Mariela Jara/IPS

A model for drafting regional legislation

In 2017, the Inter-American Commission of Women (CIM) provided a model draft law on political violence against women in the Latin American and Caribbean region.

It described such violence as “any action, conduct or omission, carried out directly or through third parties that, based on gender, causes harm or suffering to a woman or to various women, which has the effect or purpose of impairing or nullifying the recognition, enjoyment or exercise by women of their political rights.”

It stated that the violence can be physical, sexual, psychological, moral, economic or symbolic.

The proposal raised the urgent need for governments to act on the problem, since eliminating violence against women in political life is a condition for democracy and governance in the region.

Previously, the hemispheric declaration on Violence and Political Harassment against Women, adopted in 2015, had made it clear that achieving political parity required not only electoral quotas but also guaranteeing conditions for women to exercise their right to equal participation.

Strides made in Peru

In Peru, women’s rights organizations helped pushed through the first laws on gender quotas for electoral lists, which were passed in 1997, while progress was made towards the new law on parity and alternation approved in 2020.

The 2020 law contributed to the fact that in the 2021 congressional elections, women gained 35 percent of the seats in the single chamber legislature: 47 out of 130.

In the next municipal and regional elections, on Oct. 9, the law is expected to increase the scant presence of women, who despite making up half of the population and the electorate, are represented in a much smaller proportion.

There are two statistics that graphically reflect the discrimination and inequality suffered by women in politics: in the previous regional and municipal elections, in 2018, only one percent of mayors elected were women, and no female governors were elected in the 24 departments into which this Andean country of 33.5 million inhabitants is divided. 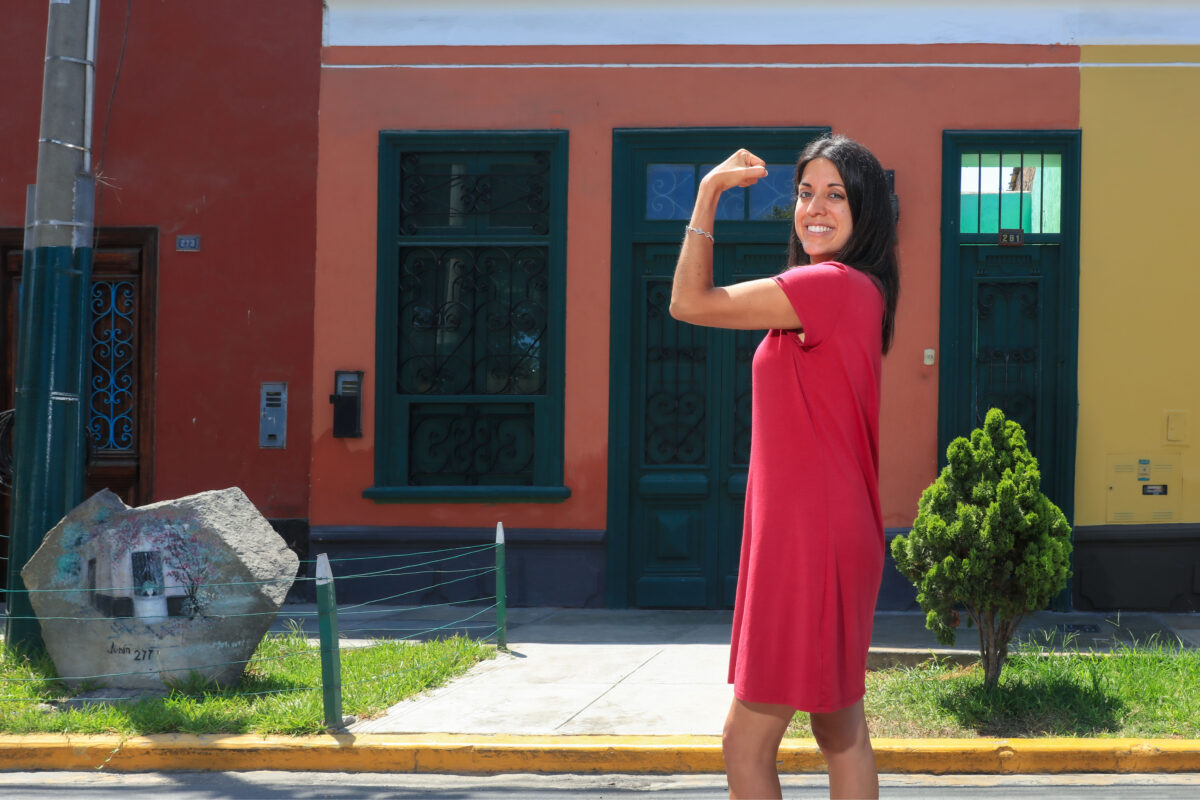 Rocio Pereyra hopes to become mayor of Pueblo Libre, a municipality on the outskirts of Lima. Showing the symbol of female power, she poses in front of the former home of Manuela Saenz, a libertarian woman who contributed to the cause of Peruvian independence and broke down gender stereotypes. “She is an inspiration to me,” says the pre-candidate for mayor in Peru’s October municipal and regional elections. CREDIT: Mariela Jara/IPS

A case in point

Rocio Pereyra, 33, is a pre-candidate for mayor for Pueblo Libre, one of the 43 municipalities that make up the metropolitan area of Lima. She will participate in the internal elections of her party, the center-left coalition Juntos por el Perú (Together for Peru), to try to win the candidacy in the October elections.

“I am leading a team that wants to bring about major changes in the district, that seeks the integral development and welfare of the local residents,” she told IPS.

In an interview in the district’s central square – where historical national independence figures such as Simón Bolívar, José de San Martín and Manuela Sáenz once converged – Pereyra stated that the low participation of women in politics has several causes, but all of them are related to discrimination and gender violence.

“We face a series of limitations that prevent us from considering ourselves one hundred percent autonomous. If you are facing violence at home or abuse from your partner, or if you do not have economic independence, it will be much more difficult for you to access spaces for political participation,” she said.

In the public sphere, Pereyra said, women are not yet recognized as equals, and are told: this is not your place, go home, do the housework, stay in the private sphere.

She said that an attempt is made to drive them out of politics by means of harassment, bullying, discrediting, invalidating their opinion and their professional, labor and political careers. “And these situations are experienced by many women when they exercise their oversight function and denounce acts of corruption,” she added.

“The message they want to send us is clear: That we better not participate in politics, because they can even mess with your family, with your children,” Pereyra said.

“Obviously women will feel even more vulnerable and will feel that they must protect their homes. So that reinforces the gender role that has been socially assigned to us. It is very pernicious,” she said.

Pereyra herself has often experienced discrimination.

“On one occasion a journalist in the district insinuated that I was involved in politics because I had a romantic relationship with a candidate,” she cited as an example.

And recently, she said, “within my own party as a pre-candidate, my interlocutor never looked at me when I spoke, but at a male colleague. Even though I was the leader, he did not speak to me.”

“Gestures can also be violent. I felt so impotent and I wanted to leave, but I said to myself, no! I’m staying and I will demonstrate my political capacity, with my actions,” Pereyra said. 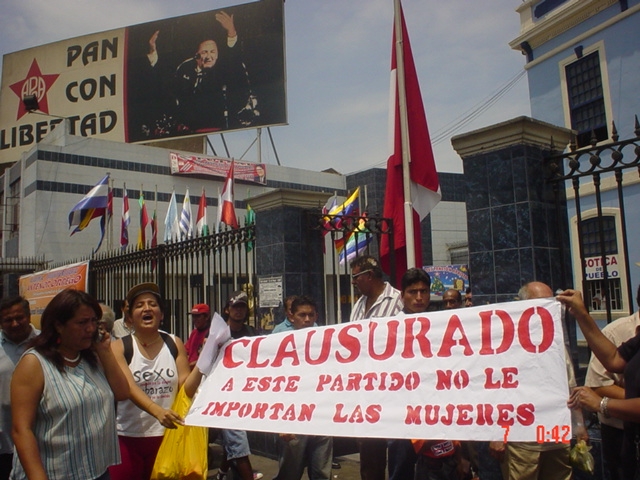 “Closed. This party doesn’t care about women,” reads a banner held by a group of women demonstrators in the Peruvian capital in front of the headquarters of one of the political parties that violates the laws on gender parity in political participation. CREDIT: Mariela Jara/IPS

A new law should help

Law 31155, which prevents and punishes harassment against women in political life, has been in force since April 2021, promoted by the “We Are Half” campaign and which includes the tenets laid out by the CIM.

Herrera, the campaign spokeswoman, said that within this framework, political organizations are required to establish standards for how to address and punish these cases. “It is up to us now to monitor compliance,” she added.

In Pereyra’s view, the country will not change by decree and she argues that laws are not enough, and that what is needed is a cultural change based on education that contributes to generating gender equality and non-discrimination, and eradicates “machismo” and sexism from the political sphere.

As for the performance of women authorities or congresswomen, she raised the need for a feminist agenda.

“We do not go into politics to be an ornament or to echo what men say, but to bring up issues that affect us. The basis of democracy is equality and freedom, and this will not be possible if our rights are restricted. Our presence and feminist agenda will contribute to deepening democracy and to bringing to life the promise of a truly fair and egalitarian country,” she said.

The regional office of the United Nations Development Program (UNDP) highlighted in a publication in March that the unequal distribution of power in politics undermines the effectiveness of governance in Latin America and the Caribbean.

It pointed out that despite the advances in legislation, only 19 of the 46 countries and territories in the region achieved gender parity at some point in the last 20 years, while only five achieved it at the ministerial level, two in national parliaments and one in municipalities.