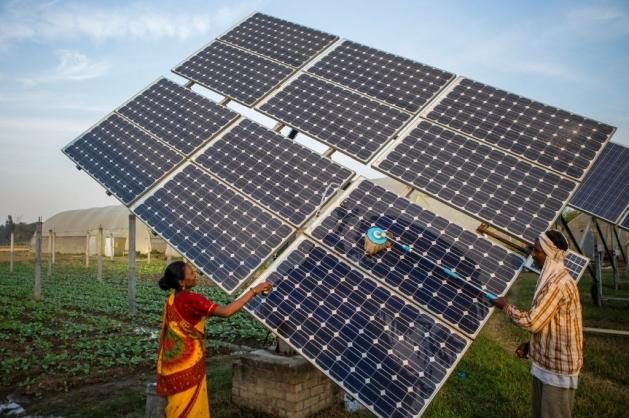 NEW DELHI, May 20 2022 (IPS) - The recent IPCC report that came out in the month of March 2022 says that, by the end of the century, the temperature rise is likely to be 2 to 3.7 degrees if global emissions, as they stand today, are not curtailed. In fact, according to the report, carbon dioxide (CO2) emissions need to come down by 45 percent globally (compared with 2005) by the end of 2030.

And current trends show that the reduction is falling quite short, as the total impact of all the nationally determined contributions put together is still not more than 11 percent. So, there is a vast gap between what we need to be doing and where we are currently.

The urgency of curtailing emissions is not lost on the political class. However, what continues to be a fraught matter is the share of responsibility that different countries are willing to accept when it comes to minimising their CO2 emissions.

Developed nations, which have contributed the most to the CO2 concentration in the atmosphere and have the resources and capability to curtail emissions, are unwilling to take on the greater share of this responsibility going forward. Most developing nations feel that this is unfair, given that they have contributed less (or minimally) to the problem and are still being forced to contribute equally

Developed nations, which have contributed the most to the CO2 concentration in the atmosphere and have the resources and capability to curtail emissions, are unwilling to take on the greater share of this responsibility going forward.

Most developing nations feel that this is unfair, given that they have contributed less (or minimally) to the problem and are still being forced to contribute equally. Moreover, fast-growing economies like Brazil, China, and India have ever-expanding energy needs, considering the stage of development they are at.

Their reliance on fossil fuels at this time will naturally be higher. The fundamental problem remains one of apportioning the responsibility or ownership of future efforts, as the available carbon space in the atmosphere needs to be vacated (by developed nations) for those who need it (many countries in the Global South), but that is not happening.

Against the backdrop of this global competition for capturing carbon space, at the COP 26 summit in Glasgow last year, Prime Minister Narendra Modi announced that India will achieve net-zero status by 2070.

The focus for India will now be on increasing the share of renewable energy in energy production and generation both in relative terms and absolute volume so as to eventually phase down consumption of coal and fossil fuels taking place in the economy across various sectors, and improving the carbon sink.

Increasing the uptake of renewable energy in India

There will likely be a large degree of government mobilisation towards solar and wind energy as well as biomass. Each of these has a role to play in India’s energy transition. However, given our climate, solar will receive the largest push.

The prime minister has announced that, by 2030, India will create 500 gigawatts of solar capacity. Currently, the national peak demand for electricity is around 203 gigawatts, whereas we have a capacity of around 400 gigawatts, including the renewables already in place.

The difficulty is that the efficiency of renewables is low, which is why the actual uptake of solar energy in the energy system is not more than 10 percent. In other words, we are only able to use approximately 10 percent of the electricity capacity that is created with renewables.

Even if we include the generation from nuclear or large hydro power in the small renewables, the share of renewable energy in the total electricity generation is still at about 21–22 percent, as compared to 78 percent with coal, oil, and gas.

So the question before us, as we try to make an energy transition, is: How do we enhance the uptake of renewables in the electricity system and how do we stabilise the grid? And where will the funding come from?

Even if India is able to produce intermittent renewable energy at a low variable cost, there are other systemic fixed costs that need to be factored in. These include the need for meeting the baseload in the grid (that is, the minimum level of electricity demand over 24 hours), transmitting the energy, transporting it across different states and regions, and, in the case of solar, making it available when the sun is not shining.

All of these require considerable investment in infrastructure and systems. And today our domestic financial system alone is not capable of mobilising finance at this scale.

So, the primary problem in making this energy transition is twofold. First, India needs to create technology for energy storage, which can meet the baseload in the grid and stabilise it when solar or wind energy is not available.

And, second, we need to mobilise the finance at a scale that can help us create a capacity of 500 gigawatts of renewable energy by 2030, and more as we go along. Every single gigawatt of renewable energy is going to cost approximately INR 6 crore. And not only in terms of financial cost, this kind of investment in renewables requires a lot of land as well.

So, the question is: Can we really mobilise these funds and resources at this scale and overcome the technology hump of renewable energy storage?

There is another challenge that lies ahead. Certain industrial sectors in the economy—for instance, petrochemicals, steel, and cement—are extremely inflexible in terms of the kind of technology and energy that they need.

So, even if we are able to reduce the emissions intensity of our GDP by improving energy efficiency and the proportion of renewable energy in our energy system, it is not going to be enough. As India grows and develops, its economic production and energy consumption will increase.

Therefore, to make the transition, we need heavy investment in alternate low-carbon fuels such as hydrogen and natural gas. We also require tech innovation at scale to bring down the cost of these fuels and enable the production of steel and cement at an affordable and competitive rate.

In summary, India’s mitigation efforts must revolve largely around mobilising funds and investing in tech innovation at scale.

What India needs to focus on when it comes to adaptation

Enhancing climate resilience is going to be critical for a country like ours. Given that many states face unique kinds of climate threats, each of them must have a climate resilience strategy, so that the productivity of the economic system does not get compromised in the process of addressing climate change.

While we focus on making changes to our energy system, we need to take simultaneous measures to ensure that agricultural productivity remains stable, water does not become scarce, coastal communities are not threatened by the rise in sea level, and so on.

One way to do this is by increasing the capacities of the communities to address climate change. Managing water resources is going to be the key to adaptation efforts, given that close to 80 percent of the water in India is consumed in agriculture.

At the same time, we need to insulate communities from climate disasters like floods, droughts, cyclones, and extreme heatwaves, which requires investment in infrastructure, for instance, roads and telecom structures.

Here, the challenge is that there are very few entities coming forward to make the kind of investments we need. In the case of mitigation efforts, there are business models that can generate returns for the investors. But, in the case of adaptation and resilient infrastructure, there are no financial returns, and it is only the government budget or public resources that we have to fall back on.

There is reason to be hopeful

While the task ahead of us entails massive systemic changes that may seem daunting, we should not lose hope.

The intensity of global discussions has permeated into national strategies, such as India’s. The successful execution of our strategies depends on political commitment, which already exists at the national and state level. State MPs and MLAs are now thinking and talking about climate change—this was not the case 10 years ago.

What we need now is for state climate action plans (many of which exist) to incorporate a framework for mobilising investments and measuring benefits and outcomes. Once this is done, it’s only a matter of time before a climate lens is fully integrated into our development policies too.

Corporate India has also woken up to their contributions to worsening climate change, and are beginning to shift their priorities accordingly. Many industry majors such as the Tatas, Mahindra & Mahindra, Wipro, Shell India, and Dalmia have announced net-zero targets by 2040 or 2050.

The SEBI has mandated 1,000 top companies listed on the stock exchange to follow a mandatory framework of business sustainability and responsibility reporting and make disclosures on some of the key environmental parameters. This is a step in the right direction, and once we develop a robust disclosure system that includes penalties and rewards for actions taken, we will begin to see a lot more movement in this area.

When it comes to citizens, there are a few things that can be done. The first is to build our own awareness, and that of those around us, when it comes to climate change impacts. We must integrate the environmental consciousness into our education system.

Doing this can help build community action against policies and actions that have adverse consequences for the environment. This is difficult but not impossible to do, given that young people today are much more environmentally conscious than the previous generations.

The second course, of action, is to develop a deeper understanding of our own resource efficiency—how much we are consuming, recycling, or restoring. Earlier we would talk about three Rs (Reduce, Reuse, Recycle); now there are six Rs (Rethink, Refuse, Reduce, Reuse, Recycle, Repair).

We need to move towards a circular economy, which will require participation from all citizens as well as industry. India has a head start here, given that traditionally we have had a culture of recycling and reusing. Industry needs to move in this direction too and follow the norms for extended producers’ responsibility. Improving resource efficiency, even in our own homes, will go a long way in making a difference to how climate change progresses in the coming years.

Rajani Ranjan Rashmi is a Distinguished Fellow at the Centre for Global Environmental Research, TERI, where he works on climate change, mitigation and adaptation strategies, carbon markets, and related issues