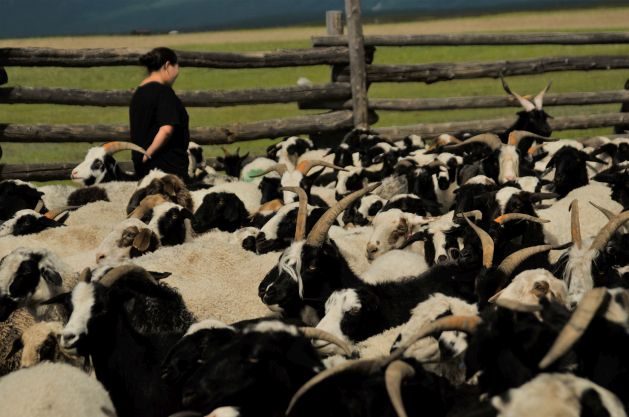 Herder D. Chimiddulam waits at home for her son, who is looking for missing livestock. Credit: Namuunbolor Tumur-Ochir/IPS

BAT ULZII DISTRICT, Mongolia, Jul 19 2022 (IPS) - “My son went after his cow. He will come soon. Our work starts as soon as the sun rises — milking the cows, herding the sheep, rearing the calves, and on it goes. There is nothing more difficult than losing cows and calves on hot summer days,” says herder D. Chimiddulam, standing in green grass on one side of a tall wooden fence, looking at dozens of black and white sheep and goats in the enclosure.

Chimiddulam was born and has been raising livestock for more than 40 years in Bat-Ulzii district, 452 km southwest of Mongolia’s capital city Ulaanbaatar. During those decades she has spent many hours tracking down her wandering animals, but thanks to a new digital record-keeping project she can now find her livestock much faster.

Nearly 200,000 animals were fitted with an ear tag that has a unique number and barcode. Each code is entered in a database. The result: when it is time to sell, locate or simply learn the background of a particular animal, the information is available online

Bat-Ulzii is one of four districts in Uvurkhangai Province to host the web-based Animal Identification and Registration system (AIRS), managed by the Ministry of Food, Agriculture and Light Industry and the UN Food and Agriculture Organization (FAO).

Nearly 200,000 animals were fitted with an ear tag that has a unique number and barcode. Each code is entered in a database. The result: when it is time to sell, locate or simply learn the background of a particular animal, the information is available online.

“Over 200 families have 7,200 cows and more than 56,000 sheep and goats tagged,” says L. Batchuluun, former head of the municipal state office, who was responsible for the project in Bat-Ulzii.

Livestock are registered with a 12-digit code. The first two digits represent the province, the next two numbers are for the district, the next two represent the village number, and the remaining six digits are the personal number of the animal. Using a smartphone application, officials can register the information on the ground, doing away with tedious paperwork.

“By tagging livestock, their origin becomes clear, enabling us to monitor whether the products that meet quality standards have reached the hands of the consumer,” Batchuluun adds in an interview. That will make the food supply safer he says.

In 2021, 188,500 households in rural areas raised a total of 67.3 million livestock in Mongolia, making up an important 38.4 percent of the GDP of provinces and local areas. The animals also supply more than half a million tonnes of meat for the domestic market.

Not only are livestock a major source of food, farmers also earn income by selling by-products including dairy products, cashmere, and wool.

According to Chimiddulam, AIRS has had many positive impacts. For example, because most livestock are registered in the system, disputes over ownership can be prevented. And if animals from different herds get mixed together, they can be quickly identified and separated. The system also discourages theft.

Because animals can be identified by number, herders can leave messages and communicate with each other when their livestock disappear or wander far away to graze. For instance, a family six km from Chimiddulam’s house recognized her cows by their tags and called her to report the news.

Also, says the herder, she would previously have to drive 20-30 km to the district centre to have the origin of the animals verified. If a veterinarian was not available, she would have to return. Meanwhile, doubts about the origin of the animal could arise. Today, that proof of authenticity is available at the click of a mouse, or even via a smartphone with a barcode reader.

“We have made about 300 small earrings… by tagging the cattle and having a registration database, it is no longer necessary to obtain a certificate of origin for livestock, which makes our work easier,” she adds.

The system also enables officials to act quickly in case of a disease outbreak and will improve breeding programmes, according to FAO’s Mongolia Country Office. 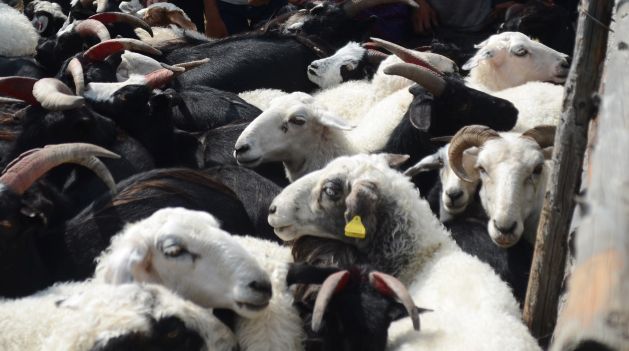 56,000 small animals in Bat-Ulzii were fitted with an ear tag after being registered in AIRS. Credit: Namuunbolor Tumur-Ochir/IPS

In the long term, herders might also benefit from a potential increase in price for livestock products that are traceable, insurance and tax benefits, and documentation they can use for banking purposes. The new system will also support the government’s priority to develop export markets for meat, adds FAO.

Phase 2 of AIRS will include an application designed for herders, which would allow them to keep track on their smartphone of the animals they have registered, bought and sold.

Bat-Ulzii soum is an important tourist destination, well known for its natural beauty. Ankle-high grass and colourful flowers are growing, and tourist numbers seem to be rebounding after slow years during the height of the Covid-19 pandemic. This makes the herders smile, as they earn extra income by providing their horses and yaks as transportation for tourists.

Some farmers have taken advantage of digitalization by fitting their horses with microchips in a programme related to AIRS.

According to L. Batchuluun, “more than 2,200 horses have been installed with locators. By allowing us to know where our herds are it will be a great improvement in the lives of herders. It will also help to prevent livestock theft.”

The Ministry of Food, Agriculture and Light Industry says it is preparing to expand AIRS throughout the country.