Why Electoral Malpractices are the Leading Form of Governance in Africa 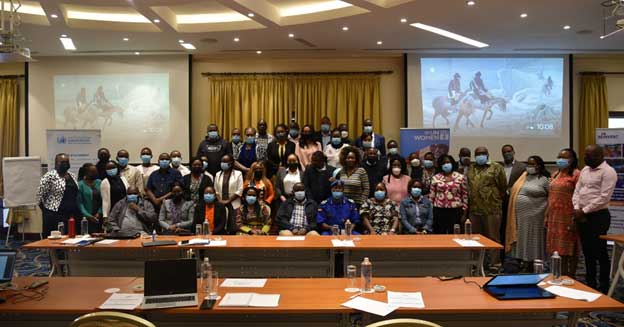 A two-day forum in Nakuru brought together a host of state and non-state actors, who collectively, were mandated to ensure Kenya’s elections will be safe and free from violence. Credit: UN Women/Luke Horswell, January 2022

MINNESOTA, USA, Aug 22 2022 (IPS) - Once again, Kenya finds itself at a crossroads. The current events in Kenya illustrate how and why electoral malpractices and not democracy and human rights are the leading form of governance in Africa.

A large number of leaders in Africa, both temporal and spiritual, are not strongly committed to constitutional rule. Every time there is electoral malpractices, especially in Kenya, there are always politicians eager and willing to give homage to a fraud in exchange for appointments to offices.

What appears to be the hidden agenda is beginning to emerge in Kenya. The very sad events in Kenya have some similarities and connections with the events in the neighboring Uganda.

There is much blanket talk about peaceful transition of power in Kenya without addressing the Elephant in the room (the electoral fraud). The Rt. Hon. Raila Odinga former Prime Minister of Kenya has rejected the outcome of the Presidential election.

The fact that four Commissioners have come out and exposed the fraud at the IBEC, the body that is charged with conducting elections in Kenya is a smoking gun. Any attempt by the international community, international media and African governments to offer legitimacy to the Deputy President William Ruto before the Kenyan Supreme Court settles the matter is premature and a dangerous move for the country.

The current situation in Kenya reminds me of what happened in Nigeria. The scourge of democracy in Africa soon came into scene. The candidate who should have been sworn in as president, Mr. Masudi Abiola, was sent to jail by the military and died there on charges of treason simply for claiming victory in election which many in Nigeria believed Mr. Abiola had won. Former president Obasanjo, was among several politicians who were thrown in jail for questioning the electoral fraud.

Kenya should stand as a lighthouse for democracy in Africa. Many scholars argue that democracy is not the answer to Africa’s problems. To a certain degree, I agree with such statements that democracy alone cannot guarantee African nations’ happiness, prosperity, health and peace and stability.

In fact, modern democracies also suffer greatly from many defects. But in spite of the flaws, we must never lose sight of the benefits that makes democracy more desirable than fraudulent elections.

As for the assertion that Dr. William Ruto won the presidential election “itself stands tainted” the reality of the electoral malpractices is now known in its essence, namely that the Rt. Hon. Raila Odinga former Prime Minister of Kenya has rejected the results of the Presidential elections 2022.

The contradiction in the presidential results of 2022 demonstrates the misery of Kenyan electoral body (IEBC). This action by the electoral body (IEBC) not only haunts the establishment of democracy, but also creates a hostile environment which can lead to political instability and bloodbaths in Kenya.

There is a policy move to anoint Dr. William Ruto as President-elect in the Republic of Kenya. Such policy will fail the people of Kenya in their search for harmony among themselves should it accept the current presidential results as the sole voice of the people of Kenya.

To do so would be to flout international law, to ordain the electoral fraud, or exempt and favor those who messed up the presidential results with their mentors and collaborators.

The cause of democracy and the enjoyment by the citizens of human rights and freedoms have and will continue to suffer so long as the international community gives support and credibility to electoral fraud across Africa.

The commitment of indigenous African peoples to protect their interests in peace and through political parties has been impressive and must stand as a leading pillar and vehicle in any endeavor for transformation in Africa towards political development.

The first African political party to be formed in Africa south of the Sahara was the African National Congress (ANC). It was formed in 1912. Just as the Africans had pinpointed, then confronted, the inequities of the apartheid system of governance through their political parties, these inequities later became the concern of the international community.

In South Africa, the ANC (having been banned, its leaders imprisoned, killed and scattered in exile), was able, within a very short time after disbandment to assert itself as the voice of the oppressed and win handsomely the first non-racial multiparty elections in South Africa in 1994.

In agreeing to form a government of national unity, the ANC became a vehicle for transformation towards a milieu of unity, peace, stability and democracy in South Africa.

Finally, between the Great Lakes and the Horn of Africa, Kenya has been and continues to be an island of peace, despite the challenges facing democracy in terms of electoral malpractices in Kenya.