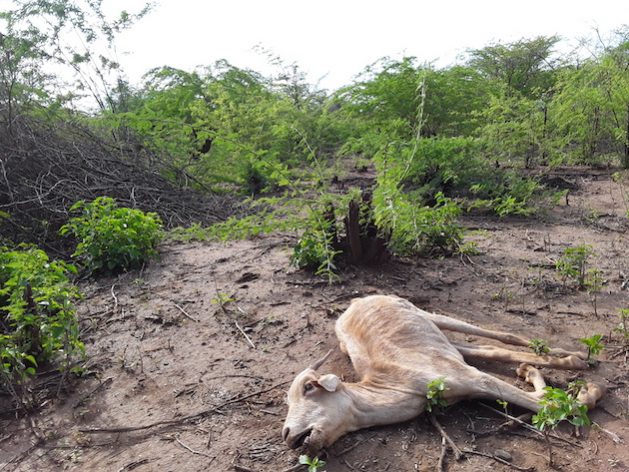 Nairobi, Sep 16 2022 (IPS) - Hannah Sakamo is worried. She is about to lose yet another goat in less than a month. A pastoralist in Eldepe village, Marigat Sub-County, Baringo County in Kenya’s Rift Valley region, her household’s lifeline is at stake.

The goat in question, whose days are now numbered, has consumed pods, or the fruits of the invasive species, Prosopis juliflora, locally known as mathenge.

Mathenge is a small, prolific seeding, fast-growing, drought-resistant, evergreen tree of tropical American origin that produces masses of pods containing small tough smooth seeds. It is by far considered to be one of the world’s worst invasive plant species.

“You can tell when a goat is on its death bed by just looking at the mouth. The goat is unable to close its mouth, eat or drink water because the mouth shakes and slides from one side to the other when the goat attempts to eat. At least seven goats die every single day in six surrounding villages because of eating these pods,” Sakamo tells IPS.

Fredrick Chege, an independent researcher in invasive wild species, says that of all livestock, goats and cattle are the most vulnerable. He tells IPS that the consumption of pods can cause neurotoxic damage to the central nervous system in mostly cattle and goats.

“Whenever affected goat attempts to chew cud per the course with the digestive process of herbivores, you will see it vomiting a green liquid and the mouth shakes uncontrollably. Digestion can therefore not be completed,” he expounds.

Once these symptoms become visible, the goat will die from starvation in a matter of days. Pastoralists do not consume meat from an animal that is either starving or ill even during a drought. It is considered taboo.

Fish from Baringo County, he says, are not spared “fishermen at Lake Baringo, and Bogoria in the Rif Valley have become accustomed to catching deformed fish. Fish without eyes because the thorns from the Prosopis julliflora species have invaded the lakes poking their eyes.”

According to research by the UN’s Food and Agriculture Organization (FAO), Prosopis juliflora is one of many invasive species in this East African nation. Research shows there are at least 34 species; 11 arthropods, 10 microorganisms, four vertebrates, and nine plant species including Prosopis julliflora.

“Mathenge is extremely difficult to control because it thrives in most soils such as rocky, sandy, poor, and saline soils. It has very deep roots that can reach the sub-surface waters. It is impossible for it to co-exist with other vegetation because it absorbs significant amounts of water,” Chege expounds.

“Even when you cut Prosopis trees above ground, they regenerate very fast, forming thorny thickets that are nearly impossible to penetrate especially along water courses, roadsides, flood plains, and generally on areas that are not inhabited or dormant land.”

Prosopis Juliflora was originally introduced to Kenya’s dry land areas as a solution to deforestation and to provide firewood. It did not take long for the solution to become a problem that has now gotten out of hand by displacing native plants and endangering pastoral economies.

Once the species has taken root, Chege says it is very difficult, labor-intensive, and expensive to successfully remove it because of regeneration from the soil seed bank as well as due to regeneration of trees from cut stems.

Prosopis juliflora seeds also pass easily through the gut of livestock and are deposited in the soil from where they thrive within a short period. Similarly, children enjoy eating pods because they are sugary and sweet and they too, deposit these seeds in the soil because they chew the pods and spit out the seeds.

Government data shows Prosopis juliflora spreads at a rate of between 4 % and 15 % per year. The average cost of clearing a Prosopis thicket three to four years old in a plot of 10X10, Sakamo indicates, falls at somewhere between $10 and $30. An expensive venture because the invasive species can begin to sprout again in a matter of four weeks.

Research shows that so prolific is the species that since the first herbarium specimen-a collection of preserved plant specimens maintained for scientific purposes- was collected in 1977 in Kenya’s coastal region, Prosopis juliflora can now be found- at varying degrees of invasion-in seven of eight regions in this East African nation.

Prosopis juliflora was declared a noxious weed in Kenya in 2008 under the Suppression of Noxious Weeds Act (CAP 325), meaning that it is considered to be harmful to the environment or animals.

Under this Act, Chege says, the Minister of Agriculture can compel land owners to remove any declared noxious weeds such as Prosopis juliflora from their land or have it otherwise removed.

Elvis Kipkoech, a charcoal trader, says that the government allowed the use of Prosopis juliflora for charcoal production as a means to control it through utilization.

This method, he tells IPS, has not worked because unscrupulous charcoal producers mix the invasive species with other tree species which has led the government to place a total ban on charcoal production in Kenya.

Against a backdrop of challenges to bring this invasive enemy under control, a solution is in sight in the form of the National Strategy and Action Plan for Management of Prosopis Juliflora in Kenya.

The strategy aims at effectively managing the invasive species through a combination of biological, chemical, mechanization, and utilization methods since Prosopis can be used not only in charcoal burning but to produce poles for furniture making and fencing.

Meanwhile, Sakamo helplessly watches as the negative effects of notorious mathenge suck the life out of her beloved goat; she urges the government to hasten access to these solutions and is hopeful that this will be her final loss.