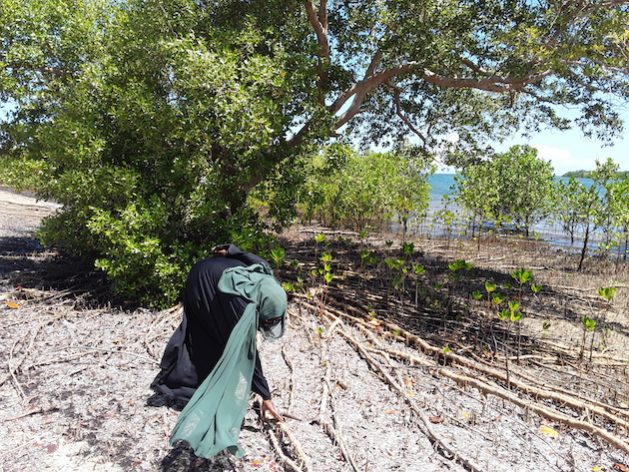 Nairobi, Jul 25 2022 (IPS) - The swish of calm waters followed by unexpectedly high tides and violent waves is now too familiar for the fisher community along Kenya’s 1,420-kilometer Indian Ocean coastline.

“When a very dark cloud hovers around the ocean, it is a signal that it is very angry, releasing very strong waves from its very depth. When this happens, the ocean will only calm down by taking a life. Fishermen are killed by sudden strong waves every year,” Aisha Mumina, a resident of Makongeni village in Kilifi County, tells IPS.

But even during such high tides, Mwanamvua Kassim Zara, a local fish trader, says the stock has significantly declined. Before, high tides meant more fish because they would run to the safety of thick mangrove roots for shelter, feeding and breeding.

Today, she says, fishers can no longer cast their net beyond the coral reef and expect a harvest. Even the popular Dagaa, a tiny silver fish and a most preferred delicacy in Vanga Bay in Kwale County with a population of over 8,700 households, has all but disappeared.

“I buy a bucket of fish from the fishermen at 40 to 45 US dollars, up from 20 to 25 US dollars. The high prices are then transferred to our customers who buy one kilogram of boiled, dried and salted fish at 3 US dollars up from 2 US dollars,” she tells IPS.

Kassim considered diversifying into rice farming, but even that presents a new set of challenges. While the tides are not sweeping fish to the shores and into the fishers’ nets, the high tides flood adjacent rice farms. This makes it impossible to access the farms, leading to the destruction of crops. 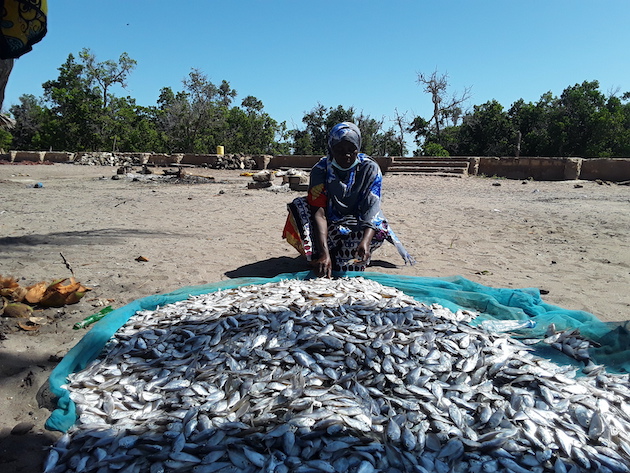 Kassim Zara says the fish population is on the rise in tandem with mangrove conservation and restoration efforts in Jimbo village, Kwale County. Credit: Joyce Chimbi/IPS

In Jimbo village, she says parents were afraid to send their children to Jimbo Early Childhood Education (ECD). In high tides, water from the adjacent Indian Ocean would flood the school, putting the lives of children at risk.

But Kassim says a promising community-led, community-driven initiative is progressively addressing their most pressing climate change-related concerns. This hope is to restore mangroves and unleash their hidden superpowers to store three to five times more carbon than terrestrial forests.

Once dismissed as dirty and swampy wetlands, the maze of lush green mangroves lining meandering water channels along Kenya’s coastline were extensively encroached upon, degraded and mangrove trees felled at a rate of 0.5 % per year from 1991 to 2016, according to the Kenya Forest Services (KFS).

Relying on indigenous knowledge, indigenous ethnic groups along Kenya’s coastline, including the Digo, Duruma, Shirazi, Wapemba and Wagunga people, discovered that the more they cut down mangroves for firewood, building material, fishing equipment and trade, the more fish disappeared. With these changes came higher and more powerful waves and floods.

“Even as various fish species such as milkfish, mullet fish and octopus slowly disappeared and fishermen could no longer cast their nets past the coral reef and catch a prawn, crab or other shellfish, it took time to see the connection,” Harith Mohamed Suleiman, a member of Kwale’s Vanga Bay indigenous communities tells IPS. 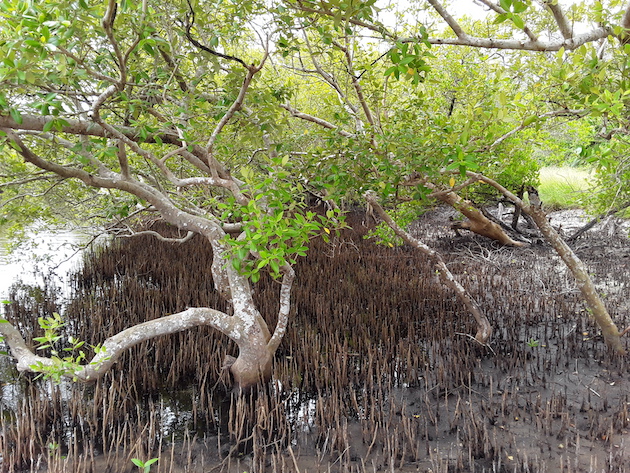 Mangroves are the first line of defence against Indian Ocean-related catastrophes. Mangrove roots provide fish with feeding and breeding grounds. They enable close to all fishing activities to be carried out along shallow inshore areas within and adjacent to the mangroves, according to the Kenya Marine and Fisheries Research Institute (KMFRI).

“It took us many years to understand that mangroves are the breeding and nursery grounds for many fish species around here. By losing mangroves, we were losing our lifeline. We make money from fishing, tourism, bird watching, beekeeping and honey from mangrove forests is unique and valuable,” Suleiman expounds.

Oscar Kiptoo, a conservationist and researcher at KFS, says mangroves are government reserve forests under KFS either singly or in partnership with the Kenya Wildlife Service when mangroves grow in marine parks and reserves. The total mangrove cover in this East African nation, he says, is approximately 61,271 hectares.

An estimated 1,850 hectares of Mombasa County’s mangrove cover are degraded, with more than 1,480 hectares destruction reported in Tudor Creek, mainly because mangrove wood is resistant to rot and insects and therefore highly valuable for building material.

Suleiman, the chair of VAJIKI, says the initiative was inspired by Gazi and Makongeni villages in Kilifi County. These communities pioneered the first of its kind carbon offset project in the world to successfully traded mangrove carbon credits. They worked under the Mikoko Pamoja Community group with support from the Kenya Marine and Fisheries Research Institute (KMFRI). 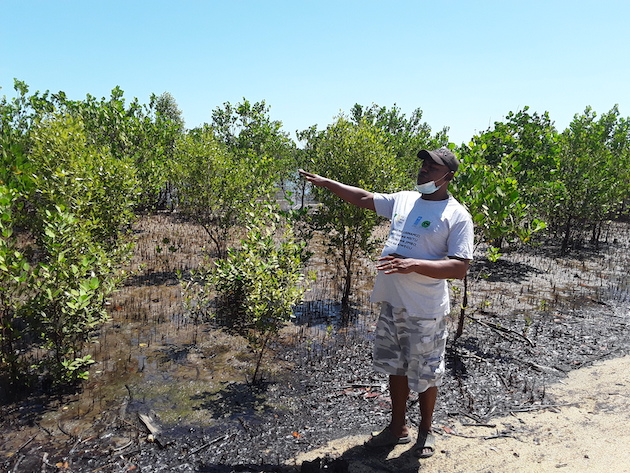 Kassim, from the VAJIKI community, says the community initially did not succeed because they lacked knowledge about mangrove species and zoning. There are mangroves for the shoreline and those that do best on the mainland.

“Since 2016, educated people from the government have been teaching us how to plant and protect mangroves. They tell us mangroves are the roots of the ocean, the same way that a tree cannot grow without trees, so it is with the ocean. We cannot benefit from the ocean if we destroy mangroves. We learn how to use mangroves as a wall around the ocean to protect us from high tides, and we see the fruits of our work,” Kassim says.

Suleiman agrees, adding that the VAJIKI project is a 460 hectares mangrove initiative officially launched in 2019. He says 450 hectares (1,112 acres) will be conserved, protected, and allowed to rejuvenate naturally. The remaining 10 (25 acres) will be reforested over two decades.

Suleiman says the VAJIKI community is committed to ensuring that the island remains free from all human activity, including illegal fishing and dynamite use. According to KFS, approximately 250 fish and 124 coral species are protected by the Sii Island mangroves.

“The VAJIKI community is in talks with government representatives to pioneer a transboundary mangrove conservation and restoration initiative that will start from Mombasa, through Kwale County and into Tanzania. We are in close proximity with other indigenous communities on the Tanzania side of the border. We have no language or cultural barriers,” he says.

The VAJIKI community plants at least 3,000 seedlings of mangroves annually and targets to sell carbon credit worth 48,713 US dollars per year by accumulating 5,023 tons of carbon above ground. Their records show that the 2020/21 period brought carbon credits worth 44,433 US dollars. 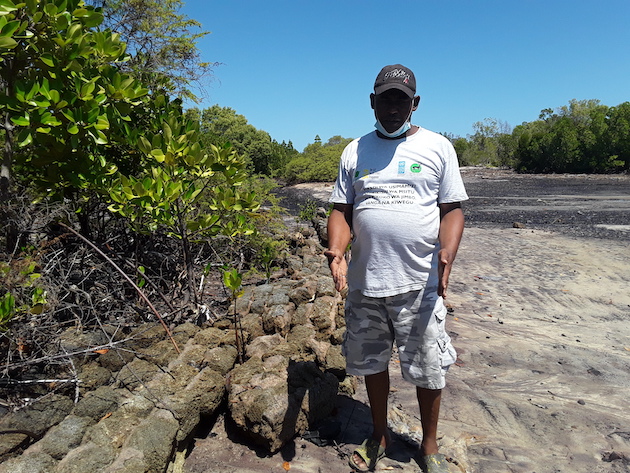 This is where a private developer had once built a hotel on the shores of Vanga Bay in Kwale County, leading to significant deforestation of mangroves. Credit: Joyce Chimbi/IPS

He says the process entails collecting tree measurements, including height, crown area or wood density, and diameter at breast height within the designated plots. These measurements, he says, are then used “as an input to the allometric equation, also known as biomass estimation equations, to provide biomass estimates.”

Suleiman says these calculations require technical know-how. The VAJIKI community relies on the Association for Coastal Ecosystem Services (ACES), a charity registered in Scotland, to coordinate the entire process, including the actual carbon trading, because they have access to viable international markets.

“Women in Kiwengu village delivered at home or in other villages because Kiwengu Dispensary did not have a maternity (ward). But we bought a bed using the money, and women are safe to deliver at the dispensary. Our children can go to nursery school because we built a barrier to prevent floods from entering the school. Rice farming is possible now because the floods have reduced in the last two years,” Kassim says.

In Makongeni Kilifi County, Naima Juma says her nine-year-old daughter was accosted and nearly assaulted on her way to fetch water; “we used to walk for two kilometres looking for freshwater because our waters are too salty. But now everyone in the village has water close to their homes through communal taps or own household taps.”

Providing clean water to the community, improved health care, sanitation, education and infrastructure to the benefit of Juma and 4,500 community members was made possible through the Mikoko Pamoja (mangroves together) initiative.

Records show the Mikoko Pamoja community-based group has 117 acres of mangrove plantation, restoring the degraded shorelines of Gazi bay by planting approximately 2,000 seedlings annually and another 2,000 on the mainland. The project captures an estimated 2,000 tons of carbon below and above ground. Records show the project currently earns at least 25,000 US dollars annually from carbon trading.

“Our community leaders and chiefs usually invite us to a meeting to discuss how the money should be spent. We usually choose projects that benefit all of us,” Juma tells IPS.

Community initiatives, Suleiman says, are so strong that a private developer who once destroyed acres of mangroves to build a beach hotel and restaurant just meters away from the shoreline demolished the facility due to community resistance. Other developers similarly deforested large chunks of mangroves to build salt pans – the projects have since been terminated.

Kiptoo says ongoing community-led initiatives are hitting all the right targets as they are a win for climate, biodiversity and communities.

Due to ongoing community-based and community-led initiatives, he says the country is successfully halting the degradation and deforestation of mangroves. 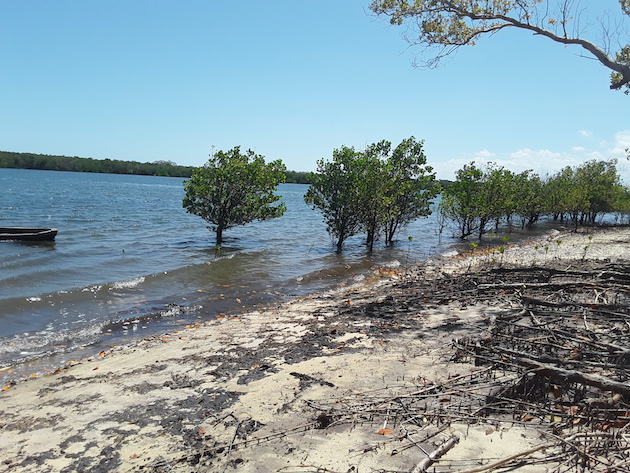 The dense mangrove forested area on the Tanzania side of the border. On the Kenyan side, communities are leading mangrove restoration efforts. Credit: Joyce Chimbi/IPS

Keeping with the United Nations Educational Scientific and Cultural Organization (UNESCO) to adopt the International Day for the Conservation of the Mangrove Ecosystem proclamation marked annually on July 26, between 2019 and 2022, KFS says over 16.7 million mangroves seedlings have been planted.

Suleiman says community-led initiatives are not without their fair share of challenges. “A lack of understanding of various mangrove species available and where they grow best is the main problem as there are species that thrive on the mainland and others along the shoreline.

“A lack of knowledge on planting methods, either through a nursery or simply picking a seedling and directly sticking it in the ground, issues of seedling spacing, and all these factors affect the survival rate. VAJIKI started planting seedlings years ago, but until recently, when we started interacting with scientists, the survival rate was only 10 percent.”

He encourages coastal communities to partner with scientists and the government because with an increased understanding of mangroves, the survival rate will improve. Other benefits will follow – like increased carbon dioxide trapped in mangroves and money earned from carbon trading that can be used to support community projects. All these significantly improve lives.

Kassim says her beloved Dagaa, a staple in the Vanga bay community, is slowly returning to the shores and within reach of fishers. She says business is booming and that fish prices would have already gone down if it were not for ongoing inflation and the fuel cost.

This feature was reported with support from Internews’ Earth Journalism Network.