Droughts Don’t Need To Result in Famine: Ethiopia and Somalia Show What Makes the Difference 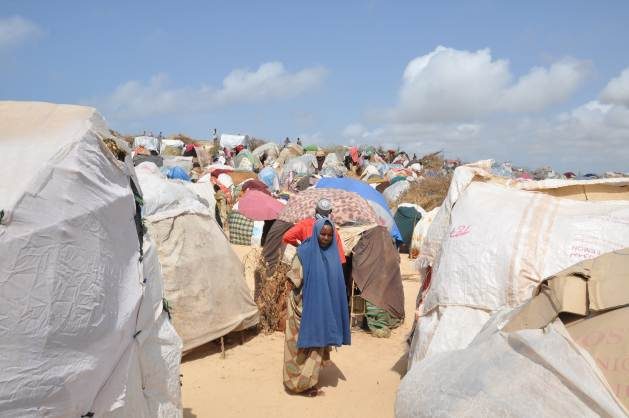 In 2010-2011, a devastating drought led to more than 260,000 deaths beyond normal levels of expected mortality in Somalia. Yet almost no one died in Ethiopia after a severe drought in 2015. Credit: Abdurrahman Warsameh/IPS

Oct 28 2022 (IPS) - The Horn of Africa is facing its worst drought in 40 years. Scientists suspect that a multi-year La Niña cycle has been amplified by climate change to prolong dry and hot conditions.

After multiple failed harvests and amid high global food prices, the Horn is confronted with a severe food security crisis. Some 37 million people face acute hunger in the region, which includes Djibouti, Ethiopia, Kenya, Somalia, South Sudan, Sudan and Uganda.

The biggest differences were that, compared with Somalia, Ethiopia enjoyed a state with more capacity and more political inclusion, and made good use of foreign aid. These are factors that I identify in the book as contributing to how climate change is affecting the security of states. I include famine as a form of insecurity

In Somalia alone, 40% of the population is facing food insecurity: about 6.7 million people. In neighbouring Ethiopia, the proportion is lower – 20% – but the absolute numbers are higher at 20.4 million.

It was not too long ago that drought led to highly divergent impacts between Somalia and Ethiopia. In 2010-2011, a devastating drought led to more than 260,000 deaths beyond normal levels of expected mortality in Somalia. Yet almost no one died in Ethiopia after a severe drought in 2015.

Why did so many people die in Somalia but so few in Ethiopia? I explore these and related questions in my recent book, States and Nature: The Effects of Climate Change on Security.

Using the cases of the two countries, among others, the book shows why Somalia had a famine in the early 2010s while Ethiopia did not, despite both being exposed to severe droughts.

The biggest differences were that, compared with Somalia, Ethiopia enjoyed a state with more capacity and more political inclusion, and made good use of foreign aid. These are factors that I identify in the book as contributing to how climate change is affecting the security of states. I include famine as a form of insecurity.

Better outcomes are expected in states with high capacity to deliver services, high political inclusion where all social groups are represented in government, and where international assistance is welcomed and shared broadly.

So how did Somalia and Ethiopia stack up on the three factors that contribute to a bad situation being made worse?

In the lead-up to Somalia’s famine in 2011, the country faced persistent problems of a weak national government that was being challenged by Al-Shabaab, a violent Islamist militia that controlled significant territory in the south of the country. The Somali government had limited ability to deliver services in the areas it controlled, let alone areas under Al-Shabaab.

For its part, the Ethiopian government invested in social safety net programmes to feed people in the midst of the drought through cash transfers, employment programmes and food assistance.

The issue of sections of the society being excluded was also in greater evidence in Somalia than in Ethiopia. A number of marginalised groups, notably the Bantu Somalis and the Rahanweyn clan, were among the most affected by the drought. Better connected groups diverted aid that otherwise would have benefited these communities.

Finally, Somalia was in much worse shape when it came to aid. Al-Shabaab militants were blocking aid into the country, which led to a number of humanitarian groups withdrawing from Somalia. In addition, the US, through the Patriot Act, discouraged NGOs from providing aid for fear it would end up in Al-Shabaab’s hands. Together, this meant that little humanitarian assistance came into Somalia precisely at the time when the country needed it most. Hundreds of thousands died.

Ethiopia was a favourite of the international community for foreign assistance. It received funds that supported its social safety net programmes, which helped it prepare for the drought and administer emergency aid supplies.

The current food security crisis in the Horn of Africa, however, reveals persistent vulnerability in both countries.

As Ethiopia’s case shows, progress can be undone. Rising political exclusion is leading to huge food security risks, particularly in the Tigray region where aid is currently largely blocked amid the ongoing violent conflict.

Equally worrisome is Somalia’s situation, where both local and external actors have struggled to build state capacity or inclusion in the face of a long-running violent insurgency.

My book provides some hopeful insights, as well as caution. It shows that for countries like Ethiopia and Bangladesh, international assistance can help address weak state capacity. Donors worked with local officials to address specific climate hazards, like drought and cyclones.

Those examples suggest that climate adaptation can save lives and contribute to economic prosperity.

However, as the unfolding dynamic in Ethiopia shows, progress can be reversed. Moreover, it’s far more challenging for external actors to build inclusive political institutions if local actors are not so inclined.

With climate change intensifying extreme weather events around the world, it is incumbent upon policymakers to enhance the practice of environmental peacebuilding, both to resolve ongoing conflicts through better natural resource management and to prevent future emergencies.