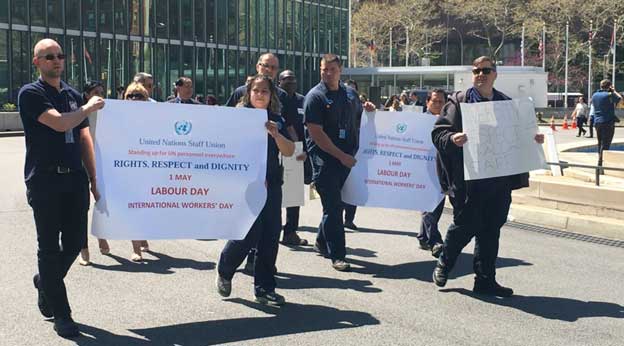 UNITED NATIONS, Oct 3 2022 (IPS) - The United Nations is planning to introduce a new “mobility policy” under which staffers based in New York and other Western capitals will be mandated to serve in overseas missions and field services in Asia, Africa, the Middle East and Latin America, including the UN’s 12 peacekeeping operations.

According to the proposed plan, the new policy will run in parallel with the staff selection system (vacancy management), which will continue to be the only way to progress to a higher level.

It covers all P (professional), D (Director) and FS (Field Service) staff in all functions. Only Assistant-Secretaries Generals and Under Secretaries-General (ASGs/USGs), plus staff in the Secretary-General’s office, staff on temporary appointments and a small percentage of posts designated as non-rotational, are exempted.

Currently, 93 percent of all posts are classified as rotational. The remaining seven percent includes project posts and those that are highly specialized and cannot be found in other duty stations.

The Mobility exercises will be annual. Staff who have reached their time limit at a duty station (2 to 5 years) will be placed in one of two compendia (one for P staff and another for FS), along with those who join the exercise voluntarily.

They must express interest in up to ten posts in their compendium at other duty stations. If they are not selected for any of the posts they requested, they may be matched to other positions.

A special constraints panel will be set up to consider appeals from staff members who cannot take part in the exercise or have reasons not to move to a proposed position or location.

There is no credit for past geographic moves. The first mobility exercise is expected to begin shortly, according to the plan.

“However, precisely due to UN Secretariat’s diversity of roles and specializations, we are not convinced that all UN staff can simply be moved around at regular intervals without risking a loss of expertise and programme continuity”.

The cost-benefit analysis of such a huge disruption to people’s life and family plans just doesn’t add up at this time, he pointed out.

A fully rotational workforce needs to be supported by continuous learning (with dedicated resources for internal and external studies); robust knowledge-sharing platforms free of digital divides; genuine results-based management; and an atmosphere of trust and collaboration where colleagues on all levels are willing to share information and support each other’s learning and success, he argued.

Though efforts are being made, these conditions are far from being met across the board. Furthermore, meaningful rotation out of hardship locations will only be achieved by removing artificial barriers between the GS, F and P categories, he noted.

“We are working with the Administration to ensure the rollout of a Mobility scheme that remains voluntary for now, so we can get people moving while we iron out the issues that will inevitably arise and continue to build a conducive environment of genuine trust, collaboration and knowledge sharing across the Secretariat,” declared Arauz, who presides over a 7,500-strong Staff Union, including 6,000 constituents in New York and 1,500 more in other offices around the globe.

According to UN estimates last year, the total strength of its staff worldwide is more than 315,000 with over 56 UN agencies, and approximately 9,300 in the Secretariat in New York,and offices in virtually every one of the 193 member states.

A former UN staffer who served in New York and later in Africa, told IPS: “ If you are designated an “international civil servant” – as all UN staffers are – you cannot work all your professional life only in New York, Geneva, Rome or Vienna, which are not considered “hardship” stations.”

All staffers are also entitled to “hazard pay” –over and above their regular salaries—for working in “dangerous peacekeeping locations”.

Those who serve in the field– outside Europe and North America– get hardship pay, mobility incentive (depending on how many moves they have done in the past), and non- family allowance– if it is a location that you can’t bring your family to

Ian Richards, former President of the Coordinating Committee of International Staff Unions and Associations, and an economist at the Geneva-based UN Conference on Trade and Development (UNCTAD), told IPS “To be clear, we support mobility. Staff join the UN to work in different parts of the world. But we should distinguish mobility from hyper-mobility.”

The Secretary-General, he pointed out, wants to force staff to another country every two to five years, which is more frequent than many diplomatic services.

“He twice asked our member states at the General Assembly to approve this package but they did not. He says he will go ahead with it anyway”.

“We are told this is to help staff in peacekeeping missions. But it will apply to all staff. I don’t understand how moving translators and their families back and forth across the Atlantic between New York, Geneva and Vienna will address the situation of colleagues in Mali. Nor if it is wise to completely change the staff of the regional economic commissions every five years”.

Richards said each move of a staff member and their family can cost the organization $75,000. With this policy in place, you could be looking at an extra $300,000 per staff member over their career.

With 20,000 international staff, member states are facing a liability of $6 billion just in moving costs. I’m not sure if they’re ready to pay for this right now.

“We have put forward sensible and cost-effective alternatives which we hope he will consider,” he declared.

He pointed out that former Secretary-General Kofi Anan initiated the mobility program and implemented it in a modified form. Experience in the field was going to be made a requirement for promotion.

“I myself was nearly assigned to Baghdad with Sergio, but due to the bombing this movement did not happen”. (In August 2003, the top UN envoy in Iraq, Sergio Vieira de Mello, was killed when terrorists blew up the UN headquarters in Baghdad, also killing at least 14 others)

Two or three of my staff voluntarily went to Bosnia and performed well., said Kohona, a former Permanent Representative of Sri Lanka to the United Nations.

He said most national diplomatic staff get rotated every two to three years and acquire excellent experience and skills. No one is irreplaceable.

“You shouldn’t become an international civil servant so as to secure the privilege of living in New York and Geneva, acquiring real estate and sending your children to expensive schools at the expense of the taxpayer,” he declared.

A former senior staffer at the UN children’s fund told IPS: “UNICEF had a mobility program, which specified that NY was a five-year duty station and staff could be moved after 5 years. The exceptions were specialized positions which were New York-based, but even in these specialized posts incumbents could be asked to rotate’.

“I don’t know the UN policies, but if I recall, we work within UN regulations which calls us to work where needed. It’s time for New York staff to work in duty stations that require assistance,” he added.

Roderic Grigson, who worked at the UN Secretariat in the ‘70s and ‘80s as a technology innovations officer and later served in peacekeeping forces in the Middle East, told IPS: “Yes, my overseas assignment was voluntary. I arrived in 1974 and left for the Middle East in 1978, less than 5-years later, so that I would have met the program’s criteria.”

“I think it’s a good thing to do, although I can see why the Staff Union will protest. All the ‘fat cats’ in HQ who have never been in a humanitarian or conflict zone should experience what it is like living in those conditions. I do not doubt they will be the better for it.”

“I clearly remember when I came back a couple of years later to New York after serving in the Middle East, I was amazed at the lack of knowledge or sympathy my colleagues had for those of us working in the field.”

“They held themselves almost superior to those who often put their lives on the line and had to live in conditions worse than what you find in the worst slums in a big city,” said Grigson, a published author of three books, now working on a fourth.

“Frankly, it pains me to say this, but many segments of the world’s first-world population consider the UN almost irrelevant. If the UN wants to stay at the forefront of peace-keeping and humanitarian relief efforts, it must begin reforming itself from within and show the world that it can play an essential role in the future,’ he pointed out.

“What I am saying, in effect, is that they have to do a much better role in marketing themselves to their global constituents and change the way people view the organization as a whole. We are moving inexorably towards major big-power conflicts in Europe and Asia, which could shape the world in ways no one would have anticipated a few years ago”.

“I support the SG in trying to do something even as small as this, which would allow people to see the UN in a better light”.

“It might also attract a better calibre of people without political connections to take on essential jobs in the field where they are needed,” said Grigson, currently a retired corporate executive based in Melbourne, who works with local community organizations teaching refugees and new migrants how to use computers and employability courses.