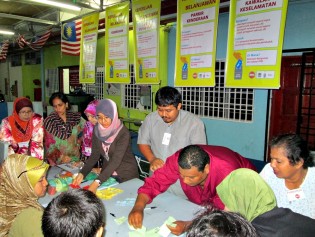 By Anil Netto
A closely contested by-election over the weekend, which saw victory for the ruling coalition, shows that the political terrain in multi-ethnic Malaysia remains divided and raises searching questions for the opposing sides.

By Anil Netto
Malaysia may have been spared the worst effects of the economic slowdown due largely to its oil and gas reserves and other natural resources.

By Anil Netto
Even if Prime Minister Najib Razak is in Copenhagen for the high-level segment of the U.N. conference on climate change, there has been precious little meaningful debate on the subject here in Malaysia.

ENVIRONMENT: Back to Traditional Farming to Beat Climate Change

By Anil Netto
When organisers of an international conference on climate change and the food crisis first scheduled the event here for late September, little did they realise the event would be sandwiched by two typhoons buffeting the region. Ironically, the first typhoon, ‘Ketsana', delayed the arrival of conference delegates from the Philippines.
ADVERTISEMENT ADVERTISEMENT