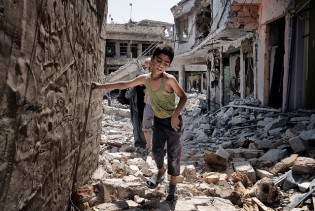 By Ann-Kathrin Pohlers
With upcoming elections in May, the Iraqi government is urging Internally Displaced People (IDPs) to return home. After the defeat of ISIS in December 2017, an increase in security and number of returnees to their region of origin is expected; however, many IDPs see no way to leave the camps just yet.

By Ann-Kathrin Pohlers
Over the last few months, the United States’ rhetoric on the Iran nuclear agreement has been ambiguous, creating an uncertain environment for investors. With John Bolton, President Donald Trump has now appointed a national security adviser who is actively seeking to leave the Iran deal.

By Ann-Kathrin Pohlers
With March marking Women’s History Month, the debate over gender-based discrimination couldn’t have reached its new peak at a more critical time.

The Politicization of Humanitarian Aid Through Budget Cuts

By Ann-Kathrin Pohlers
Ahead of the pending ‘list of shame,’ the Secretary-General’s Annual Report on Children and Armed Conflicts, child protection actors share concerns about the politicization of humanitarian aid putting child protection capacities at a disadvantage.

By Ann-Kathrin Pohlers
After peace talks failed earlier this month, the ongoing conflict in South Sudan between government forces and opposition forces that began at the end of 2013 is having a severe impact on the country’s food security and civilian safety.
ADVERTISEMENT ADVERTISEMENT