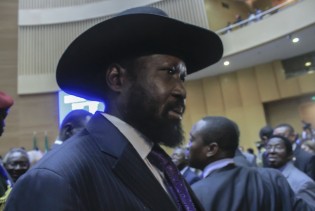 By Blain Biset
The African Union summit failed to provide a breakthrough in the ongoing negotiations between Sudan and South Sudan when it ended on Monday Jan. 28.

By Blain Biset
Ethiopia’s Anti-Terrorism Proclamation is once again stirring debate in this Horn of Africa nation as lawyer Temam Ababulga challenges the 2009 law in the highly-publicised "Muslim terrorism" case.

By Blain Biset
China could soon expand its involvement in peace and security issues in Africa, according to government officials, researchers and academics from both the Asian giant and resource-rich continent who met at the second China-Africa Think Tanks Forum in Ethiopia from Oct. 12 to 13.

By Blain Biset
While in the last decade an additional 52 million of sub-Saharan Africa’s children enrolled in primary schools, with girl’s enrolment increasing from 54 percent to 74 percent, a large majority of girls - 16 million – are still being denied access to education.

By Blain Biset
Africa can ensure food security by producing wheat. New research presented in Addis Ababa, Ethiopia this week shows that the continent has the potential to be self-sufficient.
ADVERTISEMENT ADVERTISEMENT