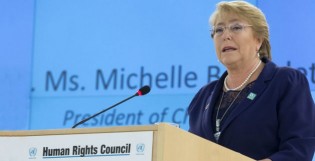 By Idriss Jazairy
History testifies that there is no end to its evolution despite what some have claimed. This is because aspirations of its actors are in constant flux and because the quest for an « ideal city » is asymptotic. Each generation wants to put its imprint on the present and to be the architect of its future in the pursuit of its own ideal.

By Idriss Jazairy
The count down towards a tragic outcome in Venezuela has started. All outside powers express what they say is a shared concern for its peace-loving people that has the misfortune of sitting on what is maybe the largest oil reserves in the world.  The problem is that geopolitics lead groups of foreign countries to express different, not to say opposed recipes as to how democracy can be restored and happiness pursued in Venezuela and want to make their own views prevail in this divided country.

By Idriss Jazairy
I have been entrusted by the Human Rights Council with the task of monitoring, reporting and advising on the negative impact on the enjoyment of human rights of unilateral coercive measures. The United Nations has repeatedly expressed concern that the use of such measures may be contrary to international law, international humanitarian law, the UN Charter and the norms and principles governing peaceful relations among States1.

By Idriss Jazairy
It is an incontrovertible fact that more people are on the move owing to globalization. Fifteen percent of the world’s population are on the move worldwide. In other words, of the world population of 7 billion, one billion are on the move. Seven hundred and forty million people are referred to as internal or as domestic migrants within their countries of origin. The number of internally displaced persons reaches about 60 million. On top of this, the world has more than 244 million international migrants who cross borders often into the unknown. Lastly, there are 22.5 million refugees – encompassing the 5.3 million Palestinian refugees – registered by the United Nations High Commissioner for Refugees who have been forced to flee their home societies as a result of violence and armed conflict. The first two decades of the 21st century will go down in history as the era in which the world has witnessed the most complex and massive movement of people since the end of the Second World War.

By Idriss Jazairy
On the occasion of the 2017 International Day of Older Persons, the Executive Director of the Geneva Centre for Human Rights Advancement and Global Dialogue Ambassador Idriss Jazairy urged the world society to facilitate the increased participation and involvement of elderly people in societies.

2017 International Day for the Elimination of Racial Discrimination

By Idriss Jazairy
The 2017 International Day for the Elimination of Racial Discrimination and this year’s theme addressing racial profiling and incitement to hatred, in the context of migration, comes at a timely moment.

By Idriss Jazairy
In my personal capacity as an academic from the Global South and a retired international civil servant, I undertook a study for the Geneva Centre for Human Rights Advancement and Global Dialogue which was published in November 2014. This was at a time when I had no idea that I would later become a member of this elite group of Special Procedures Mandate Holder. The study is entitled “In Defence of Special Procedures of the Human Rights Council: An alternative narrative from the South”.
ADVERTISEMENT ADVERTISEMENT