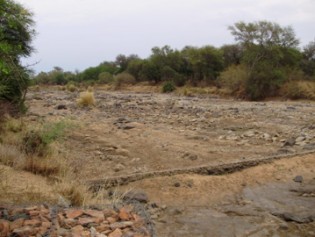 The Limpopo River basin; Many rivers but not enough water

By Ish Mafundikwa
There are many rivers in the Limpopo basin which is shared by Mozambique, Zimbabwe, Botswana and South Africa but some of the communities within it are dealing with serious water scarcity.

By Ish Mafundikwa
Ish Mafundikwa reports that only a fraction of the water available for irrigation in the Limpopo River basin in Zimbabwe is being used.

By Ish Mafundikwa
Ish Mafundikwa reports from Harare that five years after the deadly cholera outbreak that hit Zimbabwe, the country is still struggling to upgrade its water and sanitation infrastructure.

By Ish Mafundikwa
Tens of thousands of people were forcibly moved from their homes to make way for the Kariba Dam almost 60 years ago. A new Hydroelectric Scheme is being proposed at Batoka upstream from Kariba and the Zambezi River Authority is  working to ensure that the lives of those in the vicinity are not overly disrupted.

By Ish Mafundikwa
Zimbabwe's education sector, once rated amongst the best in Africa, came close to collapse during the country's economic crisis. A programme launched when the coalition government came into power in 2009 has seen the beginnings of recovery for the sector.
ADVERTISEMENT ADVERTISEMENT