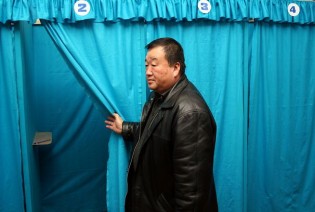 By Joanna Lillis
Giving in to sustained international pressure, authoritarian Uzbekistan is opening up its cotton fields to international monitors this fall.

Does a Personality Cult Grow in Astana?

By Joanna Lillis
“One Fatherland, one Fate, one Leader of the Nation” – so says the slogan beside the smiling face of President Nursultan Nazarbayev on giant billboards looming over the streets in Kazakhstan. They are promoting a new holiday on Dec. 1: First President’s Day, when Kazakhstan will fete its longtime leader.

By Joanna Lillis
The recent travails in Uzbekistan of Russian cellphone giant MTS – hit by employee arrests and a three-month suspension – highlight the perils for foreigners of doing business in Central Asia’s most populous country.

By Joanna Lillis
An attempt to render justice is quickly turning into a PR debacle for Kazakhstan. Troubling allegations that torture was employed to obtain incriminating statements is engulfing the trial of 37 individuals accused in connection with a deadly riot last December in the western oil town of Zhanaozen.
ADVERTISEMENT ADVERTISEMENT