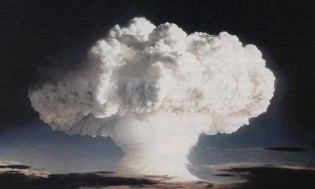 By Bishop Bill Swing and Jonathan Granoff
Between now and January 20,2021, the President of the United States has almost run out of arenas in which to impose his will. His reelection has soured in infamy. His concern for the COVID-19 pandemic faded long ago. There is only one last pursuit available to him to demonstrate that he is the most powerful man on earth, i.e. using the nuclear weapons at his disposal.

By Jonathan Granoff
Presently, the entire world is hostage to a nuclear crisis expressed in the language of war and destruction by the leaders of North Korea and the United States We can look over the abyss and the reality of the consequence of the uses of nuclear weapons strikes fear and terror in the hearts of any sane person.

By Jonathan Granoff
Every nation in the world has been invited to participate at the highest political level in the High-Level Meeting of the General Assembly on Nuclear Disarmament scheduled for Sep. 26. This has never happened before. We have never been at such a moment of crisis and opportunity.
ADVERTISEMENT ADVERTISEMENT