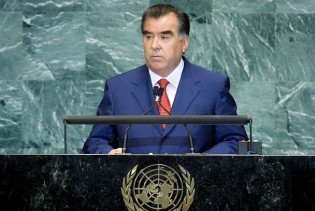 By Konstantin Parshin
It looks like Tajikistan is following a regional trend by drafting legislation that may sharply restrict the activities of foreign-funded non-governmental organisations. Activists say the bill threatens to hinder the operations of hundreds of organisations working on everything from human rights to public health.

By Konstantin Parshin
Last July, authorities in Tajikistan confiscated the only manuscript of a little-known novelist’s latest book. In what can only be described as an Orwellian sequence, after the manuscript was seized at a Dushanbe printing house, the author was hauled in for interrogation and asked questions like, “who ordered you to write this book?”

By Konstantin Parshin
Official recognition as a member of the intelligentsia in present-day Tajikistan means lots of perks, including apartments and access to state-funded vacation resorts. In exchange, members – described as the “conscience of the nation” – are expected to support incumbent authorities.

By Konstantin Parshin
In a country with no daily newspapers and soft-hitting state media outlets, the Internet is where an increasing number of curious Tajikistanis go for news and information. That’s apparently got officials worried.

By Konstantin Parshin
This summer, a 32-year-old musician with Uzbek citizenship was visiting her mother in Samarkand, Uzbekistan. For the last decade, the musician has lived in the Tajik capital Dushanbe with her husband, an ethnic Uzbek, and their 10-year-old daughter.

By Konstantin Parshin
Following a diplomatic faux pas that enraged Russia, the knives seem to be out for Tajikistan's long-time president, Imomali Rahmon.

TAJIKISTAN: Dushanbe’s Plane Caper Not Flying with the Kremlin