Stories written by Mohammed A. Salih 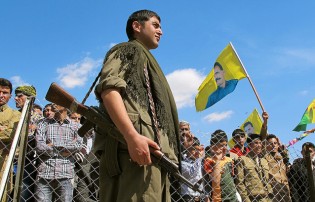 By Mohammed A. Salih
While the question of who will become Iraq's future prime minister is still uncertain, when it comes to the presidency, incumbent Jalal Talabani stands the best chance of retaining the office.

By Charles Fromm and Mohammed A. Salih
The United States should accept an "Islamist authority" in Somalia as part of a "constructive disengagement" strategy for the war-torn country, according to a new report released here by the influential Council on Foreign Relations (CFR) on Wednesday.

IRAQ: Are Kurds’ Days of Kingmaking Over?

By Mohammed A. Salih
In the run-up to Iraq's parliamentary elections next week, the once-united Kurds are not only suffering deep fissures but are expected to lose their privileged kingmaker position after the polls.

By Mohammed A. Salih
The improving security situation in Iraq in the recent years has meant more space for the United Nations to play an active role in the country's development in various sectors.

By Mohammed A. Salih and Charles Fromm
A report by the New York-based Committee to Protect Journalists (CPJ) on press freedom around the world in 2009 depicts an especially gloomy situation in the Middle East and North Africa, where authorities continue to use repressive measures to muzzle journalists.

By Mohammed A. Salih
The recent expansion of U.S. missile defence systems in the Persian Gulf just days after President Barack Obama warned Iran of "growing consequences" if it did not accept the West's conditions over its nuclear programme signals a possible change of approach by Washington even as uncertainty still prevails how it will deal with Iran eventually.

By Mohammed A. Salih
Iraq's upcoming parliamentary elections are widely considered a barometre of the country's progress and march toward stability, but they could also have a serious destabilising impact, as the U.S. prepares for a major reduction of its troops by August.

IRAQ: Chance of a Breakthrough With the Kurds?

By Mohammed A. Salih
A recent meeting between Iraq's Prime Minister Nouri al-Maliki and Kurdish President Massoud Barzani appears to be a crucial step in lowering tensions in the country, but it has also prompted questions as to whether the two leaders can put an end to their differences.

By Mohammed A. Salih
His visit to the U.S. this week was meant to be a show of statesmanship, much different than when he was in Washington last time.

By Mohammed A. Salih
The indefinite postponement of a referendum on Iraqi Kurdistan's controversial draft constitution just days after a visit by U.S. Vice President Joe Biden has given rise to speculation that Washington may have played a role in the delay.

IRAQ: Is Another Conflict Inevitable?

By Mohammed A. Salih
Relations between Iraq's various Kurdish, Arab and Turkoman ethnicities are going through a new round of complications since a provision in the draft constitution of the country's northern Kurdistan region declared a range of disputed areas part of the historical Kurdish homeland, infuriating non-Kurds in the country.

US-IRAQ: Fate of Withdrawal Pact to be Decided at the Polls

By Mohammed A. Salih
As Iraqis witness a spike in violence after a months-long relative lull, the government of Prime Minister Nouri al-Maliki has decided to put its security agreement with the U.S. to a public referendum, although the move appears to be only heightening a sense of uncertainty over the fate of the country.

IRAQ: Stumbling From One Conflict to Another?

By Mohammed A. Salih
When U.S. President Barack Obama announced his plan last week to pull out all U.S. combat troops from Iraq by September 2010, the news did not generate much enthusiasm among Iraqi Kurds.
ADVERTISEMENT ADVERTISEMENT