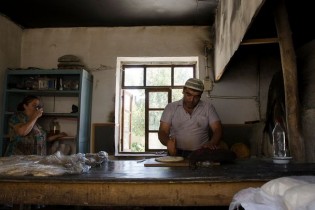 By Murat Sadykov
Judging by the long line outside the Russian Embassy in Tashkent one recent afternoon, new Russian legislation offering citizenship to Russian-speakers is prompting lots of individuals in Uzbekistan to ponder emigration.

By Murat Sadykov
Two of the most despotic leaders in the world sit atop the governments of Turkmenistan and Uzbekistan, according to rights groups. But in sharp contrast to the way they regard their respective peoples, Turkmenistan’s Gurbanguly Berdymukhamedov and Uzbekistan’s Islam Karimov seem to treat each other with courtesy and respect when they get together.

Is Uzbekistan’s Economy Going into a Tailspin?