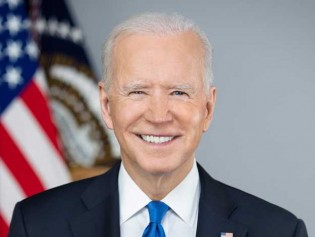 Biden to Democrats: Nominate Me– Whether You Like It or Not

By Norman Solomon
With 2023 underway, Democrats in office are still dodging the key fact that most of their party’s voters don’t want President Biden to run for re-election. Among prominent Democratic politicians, deference is routine while genuine enthusiasm is sparse.

Bob Dylan and the Ukraine Crisis

By Norman Solomon
Fifty-nine years ago, Bob Dylan recorded “With God on Our Side.” You probably haven’t heard it on the radio for a very long time, if ever, but right now you could listen to it as his most evergreen of topical songs:

By Norman Solomon
Hidden in plain sight, the extreme hypocrisy of the U.S. position on NATO and Ukraine cries out for journalistic coverage and open debate in the USA’s major media outlets. But those outlets, with rare exceptions, have gone into virtually Orwellian mode, only allowing elaboration on the theme of America good, Russia bad.

By Norman Solomon
Joe Biden provided a stirring soundbite days ago when he spoke from the White House just after suicide bombers killed 13 U.S. troops and 170 Afghans at a Kabul airport: “To those who carried out this attack, as well as anyone who wishes America harm, know this: We will not forgive. We will not forget. We will hunt you down and make you pay.”
ADVERTISEMENT ADVERTISEMENT