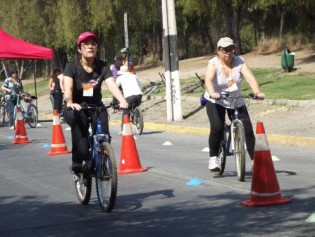 By Pamela Sepulveda
What does riding a bike have to do with women’s rights? According to the Chilean feminist group Macleta, which promotes cycling and a gender perspective on public transport, a bicycle is a powerful tool for social change.

By Pamela Sepulveda
"It's extremely serious, a full-blown environmental catastrophe," environmentalist Sara Larrain told IPS, describing the impact of the fire that has been raging through the Torres del Paine National Park in Chilean Patagonia since Dec. 27.

By Pamela Sepulveda
In support of Chile's ongoing student protests, and voicing their own demands, thousands of people took to the streets in more than a dozen cities in Latin America Thursday demanding quality public education.

CHILE: “We Are Prepared to Give Our Lives for Education”

By Pamela Sepulveda
As students and teachers continue their massive protests in the streets of Chile's cities, one of the most extreme methods of demanding higher-quality, free public education is the hunger strike being undertaken by 28 youngsters at secondary schools across the country, four of whom have not taken food for nearly 40 days.

By Pamela Sepulveda
The problems plaguing Chile's education system are not unknown in the rest of Latin America, but are especially complex in this long, narrow country sandwiched between the Andes mountains and the Pacific ocean.

By Pamela Sepulveda
"Today we need structural changes; we need to move towards a new model of education in Chile and to sit down to talks that include all of the concerned parties," said Camila Vallejo, one of the leaders of the student movement that has the right-wing government of Sebastián Piñera up against the wall.

By Pamela Sepulveda
"What is happening in Chile isn't justice; it's a pantomime, because under the anti-terrorism law, there is absolutely no way justice can be done," José Venturelli, spokesman for the European Secretariat of the Ethics Commission against Torture, said on a recent visit to this South American country.

By Pamela Sepulveda
Fisherfolk and indigenous people in southern Chile have petitioned the Inter-American Commission on Human Rights in their 15-year conflict with Celulosa Arauco y Constitución (CELCO), a paper pulp company which plans to dump toxic waste in the ocean, and with the Chilean state for alleged human rights violations.

By Pamela Sepulveda
As tensions mount in Chile's Mapuche territories, the indigenous people have created a new legal defence body for cases involving resistance against the state, as they put little stock in the justice system for working out cases such as land disputes.

By Pamela Sepulveda
Criminal law should not be used against freedom of expression, nor to silence community radio stations in Chile, say activists and journalists in response to closures of community radio outlets in this South American country.

By Pamela Sepulveda
Trade unions and non-governmental organisations in Chile are worried that rightwing billionaire Sebastián Piñera's election as president will mean setbacks in terms of social policy and respect for labour and social rights.

CHILE: Human Rights Institute to Keep the Past from Coming Back

By Pamela Sepulveda
The Chilean parliament has approved the creation of a national institute for human rights, another step towards fulfilling the human rights agenda of the government of socialist President Michelle Bachelet.

By Pamela Sepulveda
Although agricultural exports are among the most productive and steadily growing sectors in Chile, rural women continue to face precarious jobs, low wages, little access to land and the growing dominance of agribusiness.

By Pamela Sepulveda
"They burst in aiming machine guns at us. They found him in the hallway, they grabbed him by the hair, they threw him on the floor and they beat him up," Ida Huenulef told IPS, describing the arrest of her son Miguel, the first indigenous Mapuche activist to be charged under the Anti-Terrorist Law by the government of Chilean President Michelle Bachelet.
ADVERTISEMENT ADVERTISEMENT