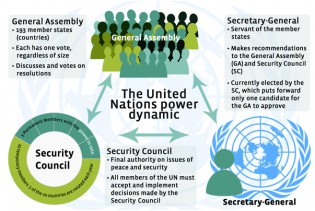 A Seven-Year, One-Term for U.N. Chief?

By Patrick Fernando
A group of former world political leaders – who call themselves The Elders – has proposed the next U.N. Secretary-General be appointed for a single, non-renewable term of seven years, in order to strengthen his or her independence and avoid the perception of being guided by electoral concerns.

Ebola Both a Health & Development Crisis

By Patrick Fernando
The United Nations Development Programme (UNDP) says Ebola must be confronted both as a health crisis and a development crisis.

Global Tourism on the Rise

By Patrick Fernando
The World Tourism Organisation (UNWTO) says 2014 was a highly successful year for global tourism. The number of international tourists (overnight visitors) reached 1,138 million in 2014, 51 million more than in 2013. With an increase of 4.7 percent, this is the fifth consecutive year of above average growth since the 2009 economic crisis.

By Patrick Fernando
Prince Adel El-Hashemite, who claims to be the heir apparent to the British-sponsored Hashemite Kingdom of Iraq from 1921 to 1958, has criticized French president Francois Hollande for referring to a wave of killings in Paris as the work of (Islamic) “fanatics” and “extremists”.
ADVERTISEMENT ADVERTISEMENT