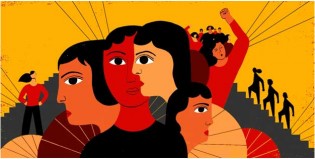 By Quratulain Fatima
The past weeks have been quite traumatic for the women of Pakistan. Recently, a young woman named Noor Mukadam was murdered and beheaded by her alleged partner in Islamabad, Pakistan’s capital city. A few weeks ago, the prime minister’s statement on rape erroneously construed the crime as being the fault of the victim.

By Elsa D'Silva and Quratulain Fatima
India recently launched a sex offender registry to deter sex offenders from perpetrating crimes against women and children by indicating that the government is keeping track of them. The personal details of 440,000 sex offenders who have been convicted for various crimes like “eve-teasing”, child sexual abuse, rape and gang rape will be registered in this database and accessible to law enforcement.

By Quratulain Fatima
Last week, 200 people were injured and 131 died in a suicide bombing in Mastung, Baluchistan. This attack was second most deadly since the 2014 Army Public School Attack in Peshawar, KhyberPukhtunkwah, which killed 144 people. This recent attack was one of three in 72 hours related to the country’s upcoming elections on July 25.
ADVERTISEMENT ADVERTISEMENT