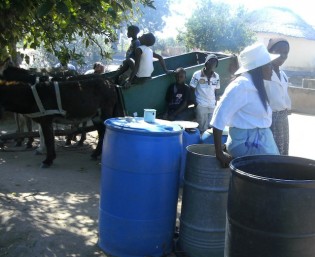 By Stanley Kwenda
Pansy Tlakula, the African Union's Special Rapporteur on Freedom of Expression and Access to Information, has done her best to address the continued harassment of journalists in the Gambia.

By Stanley Kwenda
There are some unlikely comparisons between the work lives of Mohammed Bouazizi, the Tunisian fruit seller who sparked the Arab revolution, and Francis Tachirev, a fruit seller in Zimbabwe.

By Stanley Kwenda
Alec Marembo has built his family fortune making bricks in Dzivarasekwa, a sprawling high-density suburb north of the capital of Zimbabwe. But due to the economic crisis of the last decade, his fortune started crumbling. Although he could break even when the downturn started, he finally gave in to competition from the Chinese.

By Stanley Kwenda
A new constitution, voters’ roll and electoral law, among other things, have to be in place before elections in Zimbabwe can be held but observers doubt if this can be implemented.

By Stanley Kwenda
Kindness Paradza has a mission. After he lost his job as a journalist when the ZANU-PF government closed his newspaper in 2004, he ploughed his life savings into a 2,000 ha farm he received as part of Zimbabwe’s controversial "land reform programme".

By Stanley Kwenda
Zimbabwean activists will raise the issue of privatisation at the World Social Forum, taking place Feb 6-11 in Dakar, Senegal, and seek solidarity from other activists to resist a renewed government attempt at selling Zimbabwe’s state- owned enterprises.

By Stanley Kwenda
The word "sanctions" was among the first five words mentioned to the new European Union (EU) ambassador to Zimbabwe Aldo Dell Ariccia when he first arrived and met with government officials in Zimbabwe a few months ago.

By Stanley Kwenda
Zimbabwe’s debt burden of about 8.3 billion dollars, owed to internal and external institutions, is crowding out essential national budget items such as health and basic services, with detrimental effects for particularly women.

By Stanley Kwenda
The Southern African Development Community (SADC) has set ambitious targets for regional integration. But the goal of creating a customs union by 2010 has been postponed and the adoption of a single regional currency by 2018 may be missed due to national concerns.

DEVELOPMENT-AFRICA: Tax Could be The Way Out of Aid Dependence

By Stanley Kwenda
Many African countries struggle with debt and finding money for national budgets because they fail to recognise taxation as a sustainable source of funding. Moreover, multinational companies are too easily given tax breaks while siphoning off money through illegal tax evasion.

By Stanley Kwenda
While investors need assurances about property rights and the protection of investments before they will invest in Zimbabwe’s precarious economy, the state of democracy in the Southern African country should also be a consideration.

By Stanley Kwenda
The Mozambican government has adopted various policies to address the effects of climate change, with special attention to women as studies show that they are more adversely affected by this phenomenon.

ZIMBABWE: ‘We Too Want to be Wealthy’

By Stanley Kwenda
Saddled with debts of more than $7 billion, Zimbabwe is anxious to resume diamond exports, suspended in May amidst international condemnation of alleged human rights violations in the Marange diamond fields. But the treatment of people living in the fields themselves suggests the country's record on rights bears further examination.

By Stanley Kwenda
The North should pay reparations to the South for the effects of climate change.

By Stanley Kwenda
On average women constitute 18.8 percent of representatives in parliaments across the world according to the Inter-Parliamentary Union (IPU). This gender imbalance has been subject to much feminist criticism and many campaigns for change have been staged to address the status quo. The situation is however different in Rwanda.

DEVELOPMENT: Spain’s New Drive to Extend its Interests in Africa

By Stanley Kwenda
Spain is breaking new ground in its relations with Africa through an ambitious programme which has seen it increasing its development funding to the continent more than six-fold from 2004 to reach 1,4 billion euros in 2008.

By Stanley Kwenda
The same kind of worldwide solidarity that helped bring down apartheid is necessary to free the global South from economic domination.

By Stanley Kwenda
The Zimbabwean government has been working hard to attract international investors to revive the country’s failing economy. Success on this front in 2010 may hinge on the coalition government convincing investors their capital will be secure.

By Stanley Kwenda
A basket fund aimed at increasing the economic participation of women in Zimbabwe, has been relaunched after a start which faltered due to the delayed appointment of the new government earlier this year.
Next Page »
ADVERTISEMENT ADVERTISEMENT