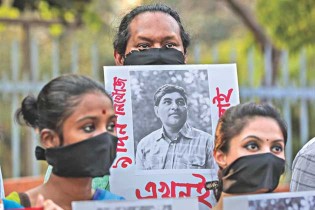 One more nail in the coffin of free press

By Sushmita S. Preetha
A barrage of fireworks light up the smoggy skies of Dhaka and I feel as if I'm in the opening scenes of a dystopian film.

The Devil in Development

By Sushmita S. Preetha
The word “development” - eliciting as it does grandiloquent notions of progress - has become, at least in Bangladesh, something of a red herring. It is used as a catch-all phrase to justify just about anything — from eviction of slum-dwellers to make way for high-rise housing projects to forceful grabbing of ancestral lands to build eco-parks and tourism spots, from rampant deforestation of our woodlands to unapologetic pollution of our rivers, from undemocratic and top-down imposition of anti-people projects to suppression of dissent through violence both sponsored or otherwise. It matters little that such so-called development only exacerbates the extreme vulnerabilities of people already on the margins, destroys scarce natural resources and intensifies the ever-widening gap between the haves and the have-nots; that it does precisely the opposite of what “development”—real, pro-people development—ought to do. If one protests these actions as unjust, undemocratic or inequitable, one can be easily dismissed as being “anti-development”, and by extension, “unpatriotic”, making it ever more difficult to have any sort of constructive conversation about Bangladesh's development priorities (or the lack thereof).

If Our Democracy Could Talk, What Would It Say?

By Sushmita S. Preetha
Does our democracy bleed when 12 people are killed in just one phase of UP elections? Does it reek of half-rotten flesh of the masses, of mouldy dreams and broken promises? Does it feel ashamed, weary, angry, when, in its name, school children are shot dead, and youth tortured, in broad daylight, shamelessly, unapologetically, with impunity? When, in its name, more than a hundred are reportedly killed in the first four phases of UP elections, 40 of them AL activists, 12 supporters of rebel AL candidates, two BNP men, and the rest, ordinary citizens with no stake in the elections beyond that of, yes, a citizen? Does democracy cringe in humiliation when opposing candidates are prevented from filing nomination papers, ballot boxes are stuffed and voting centres taken over by force as we [continue to] sing the eulogies of a 'free and fair' election? Does it find itself drowning in a perplexing time warp, with the past, present and future collapsing onto each other, with history repeating itself, over and over, albeit in new(er) forms, the boundaries between heroes and enemies blurred more than ever?

When Only Men Make the News

By Sushmita S. Preetha
On the onset, it seems women are everywhere in the media. You switch on the TV, there is inevitably an attractive woman luring you into buying a product. On the radio, there is the 'young new thing' vivaciously flirting with her male co-host while shuffling through songs; and in print, the entertainment pages would simply not sell without a titillating image of a female celebrity and a scoop on her latest rendezvous. But take a closer look, beyond the objectified and stereotypical images of women, being manufactured and mass consumed ad nauseam, and where are the women, really? Take a look at the news media, for instance. Where are the women in the newsrooms, in the bylines on the front and back pages, in the column spaces of our opinion pages, in the talk shows, not simply as hosts, but as commentators on so-called hard issues such as politics and foreign affairs? Where are the women in our news (discounting the PM and her alter-ego), except as wailing victims of violence, natural disasters and such and as muses of our male photographers during cultural festivals?
ADVERTISEMENT ADVERTISEMENT