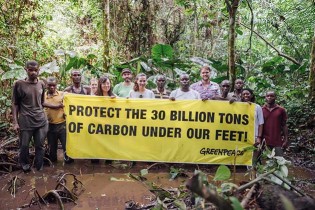 By Tal Harris and Raphaël Mavambu
Nine of the 16 oil blocks to be auctioned in the Democratic Republic of Congo (DRC) next month overlap Protected Areas, according to a review of official government maps by Greenpeace Africa.

This is How Hope Trumped the Fog of War in Nairobi

By Tal Harris
As Russia’s attack began rattling Kyiv with multiple missile and air raids about 5am on 24 February, it suffused the dawn with stains of darkness. It was accompanied with military menaces in countries like Finland and Sweden and raising a warning to anyone who may assist the Ukrainian people – ordinary citizens bereaved, over 2.5 million displaced and boldly defending themselves – from nuclear war.
ADVERTISEMENT ADVERTISEMENT