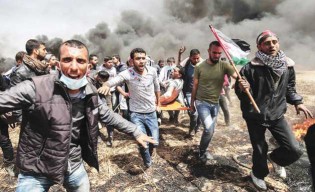 By Zeid Ra'ad Al Hussein
Appalling recent events in Gaza have called this Council into Special Session. Since the protests began on 30 March, 87 Palestinians have been killed by the Israeli security forces in the context of the demonstrations, including 12 children; 29 others, including three children, were killed in other circumstances. And over 12,000 people have been injured, more than 3,500 of them by live ammunition.

Why Is International Human Rights Law Such an Easy Target?

By Zeid Ra'ad Al Hussein
"Earlier this month, Britain’s Prime Minister called for human rights laws to be overturned if they were to "get in the way" in the fight against terrorism. Specifically, Theresa May said there was a need "to restrict the freedom and movement of terrorist suspects when we have enough evidence to know they are a threat, but not evidence to prosecute them in full in court."

By Zeid Ra'ad Al Hussein
Fifty years ago, this was the day I first heard the sound of war. I was three and a half years old and, while fragmentary, I can still remember military men milling around our home in Amman, an armoured car stationed nearby and later, planes that flew overhead.

By Zeid Ra'ad Al Hussein
Almost two decades ago, in Beijing, 189 countries made a commitment to achieve equality for women, in practice and in law, so that all women could at last fully enjoy their rights and freedoms as equal human beings.
ADVERTISEMENT ADVERTISEMENT