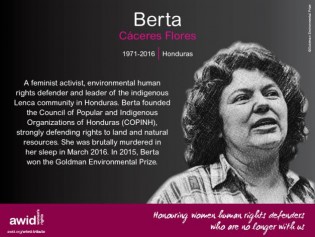 By Lejla Medanhodzic
AWID’s 5th online tribute to Women Human Rights Defenders (WHRDs) who have died in recent years, commemorates sixty feminists and activists. Thirty eight of these defenders died violently, and were murdered as a result of who they were, their identities, and the rights they defended.

By Inna Michaeli
“One challenge we are facing is that we are invisible as a region, and the feminist movement is invisible, both inside and outside the region.” Natalia Karbowska, Board Chair of Ukrainian Women’s Fund said at a session on Eastern and South-East Europe, Caucasus, and Central Asia: Getting (back) on global feminist map during the recent AWID Forum held in Bahia, Brazil from the 8th-11th September, 2016.

By Lydia Alpízar Durán
When you are faced with the task of moving an object but find it is too heavy to lift, what is your immediate and most natural response? You ask someone to help you lift it. And it makes all the difference.
ADVERTISEMENT ADVERTISEMENT