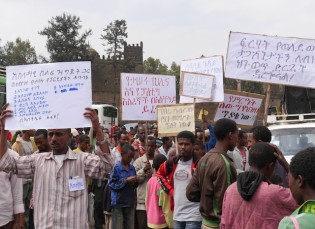 By William Lloyd-George
Despite speculation that the first anti-government protest in eight years, which was held this week in Ethiopia's capital, Addis Ababa, might signal new levels of political tolerance by the government, leaders of the political party that organised the protest say this cannot be further from the truth.
ADVERTISEMENT ADVERTISEMENT