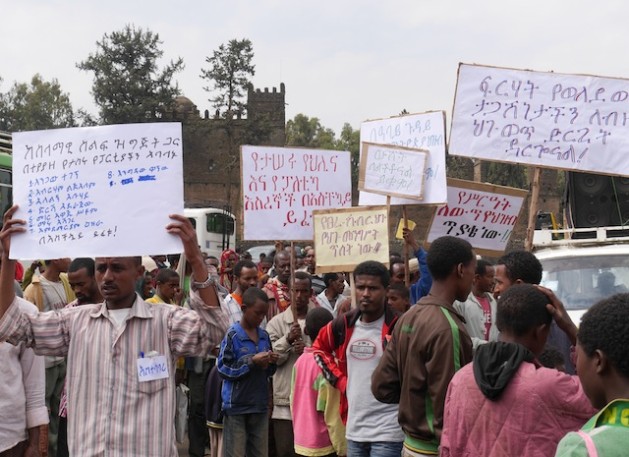 On Jul. 14 several hundred opposition protestors gathered in northern town of Gondar to and called on the government to stop exploiting the antiterrorism law and release those whom the law has been used to imprison. Credit: William Lloyd-George/IPS

GONDAR, Ethiopia, Jul 19 2013 (IPS) - Since the violence that ensued after the ruling party won Ethiopia’s 2005 elections, this East African nation has seen little in the way of political dissent. That is, until the last few months.

Since June, the country has witnessed protests in three of its major cities. Despite the significance of these protests, observers disagree over how much they signal a rebirth for the country’s opposition movement and the government’s tolerance of it.

“Until the recent protests, most had lost faith in the democratisation process and opposition parties,” Hallelujah Lulie, a political analyst from the Ethiopia-based Institute for Security Studies told IPS.

When the ruling Ethiopian People’s Revolutionary Democratic Front won another term of office in 2005, thousands of protestors took to the streets in protest, as the party has been in power since 1991.

The crackdown led to the arrest of several opposition party politicians, with many others being forced to flee the country and give up politics.

“We need legislative change in order for proper liberalisation where opposition groups are free to operate without arrests and other harassment.” -- Hallelujah Lulie, political analyst

“Recent opposition activities, however, show that people are beginning to recognise the opposition again, which could be a big boost for the domestic opposition parties,” said Hallelujah.

On Jun. 2 a new opposition group, the Blue Party, organised mass protests in the country’s capital, Addis Ababa. Thousands marched down one of the city’s main avenues, calling for the release of political prisoners and journalists and the reform of government policies.

The protest was given permission, and no arrests were made during, before, or after the demonstration, leading some to believe that the government had become more tolerant towards opposition activities.

“While there have been no arrests so far, we have credible information that the government is plotting to break up our movement and label us as terrorists. We have seen no change in the government or a willingness to engage in dialogue with us,” Yilkal Getnet, chairman of the Blue Party, told IPS.

Getachew Reda, spokesman for the Ethiopian Prime Minister’s office, told IPS that opposition parties have always been allowed to protest peacefully, but they would not negotiate with the protestors, as there are proper legal channels to address issues that the opposition politicians had not exhausted.

“Despite a lack of response from the government, we believe that the opposition movement will continue to gain momentum and are deeply encouraged by the (recent) protests,” said Yilkal.

On Jul. 14, the major opposition party, the Unity for Democracy and Justice (UDJ), organised protests in two major cities, Gondar and Dessie, in north and north-central Ethiopia, respectively. It was part of a campaign ‘One Million Voices for Freedom’, which sought to get one million signatures on a petition with demands similar to those of the Blue Party.

In Gondar, protestors marched through the capital and called on the government to stop exploiting the anti-terrorism law and release those whom the law has been used to imprison, including political prisoners and journalists.  At the march’s peak, hundreds could be seen, at its lowest, dozens.

“Numbers do not matter right now, it is just very symbolic that the recent protests took place out of Addis, as most the activism is in Addis where it is easier to mobilise supporters,” said Hallelujah. “It shows that the opposition movement could be on the path to regaining popular recognition and trust again.”

Hallelujah believes the protests could be a sign that the opposition is emerging again, he argued that they still face huge challenges that could hinder their chances of success. He said that it is hard for opposition parties to increase their membership freely, to raise funds and even to rent a hall for party meetings.

“They are still operating in a very tight and unfriendly environment,” said Hallelujah. “We need legislative change in order for proper liberalisation where opposition groups are free to operate without arrests and other harassment.”

In the run-up to the protests in Gondar, UDJ party leaders say they faced extreme harassment by the regional state authorities. According to the UDJ, on Jul. 13 local police surrounded the office and would not let their members out all day. Only at the last minute an unofficial deal was reached with the local commander to hold the protest, or so claim party members. Also, over 10 members of their group were arrested for distributing leaflets to the general public in the days leading up to the protest.

“They beat my legs so bad, I could not even walk for a week,” Amedemakryam told IPS from the prison. “We have not been allowed out of this cell since. It’s horrible.”

Before he could finish his sentence, another party member who was also arrested for distributing leaflets appeared. Maru Ashagere, a hairdresser, told IPS that the local authorities went to his parents’ chicken farm and said they would poison all the chickens as punishment for their son’s political activities.

“This kind of harassment makes it very difficult for us to operate but we will struggle through none the less to achieve our goals,” Asrat Tassie, Secretary-General of UDJ, told IPS at the police station.  “Despite all this, we were able to go on with our protest and mobilise the people.”

Not only were party members harassed, but some Gondar residents told IPS they were too scared to join the protests due to threats made throughout the city.

While some might have not have joined out of fear, it appears that many around Gondar did not join because of a lack of faith in the UDJ and the opposition movement. Several residents told IPS that they did not trust the UDJ or believe that it could find real solutions.

“If they can show us real policies to replace the ruling parties, then maybe more for us would join,” said Tesfaye, 34, a local shopkeeper. “They just shout against the government but don’t offer a decent alternative, or solutions to the problems. That is not helpful to anyone.”

(*This story, which moved on Jul. 18, 2013, made reference to a violent quashing of protests after Ethiopia’s 2005 elections. The headline referring to the ascendance of opposition political parties has been changed.)