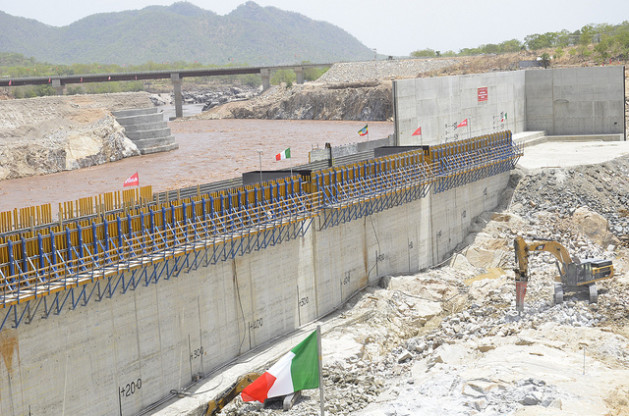 Ethiopia invests more of its resources in hydropower than any other country in Africa. Pictured here is the Grand Ethiopian Renaissance Dam, situated in Ethiopia’s Benishangul-Gumuz Region on the Blue Nile. Credit: William Davison/IPS

WASHINGTON, Jul 17 2013 (IPS) - The U.S. and U.K. foreign assistance offices are being accused of ignoring, mischaracterising or downplaying testimony offered by ethnic communities in Ethiopia who accuse the Addis Ababa government of forcefully evicting them from their lands and violating their human rights in the name of mass development projects.

Despite multiple fact-finding missions to affected communities by USAID and DFID, the U.S. and U.K. foreign aid arms, both governments have repeatedly found the accusations of abuse to be unsubstantiated.

“This whole idea of a ‘Renaissance state’ is taking place at a huge cost, being borne especially by the indigenous communities." -- Anuradha Mittal of the Oakland Institute

Yet according to recordings of some of the mission meetings, published Wednesday by the Oakland Institute, a U.S. watchdog group, officials from both agencies appear to have received repeated testimony of abuse allegations at the hands of the Ethiopian government. (The reports can be found here and here.)

“Transcripts of these recordings, made public with this report, leave no room for doubt that the donor agencies were given highly credible first-hand accounts of serious human rights violations during their field investigation and they have chosen to steadfastly ignore these accounts,” Will Hurd, the author of one of the new reports and a local NGO worker and translator who made the recordings, writes.

“According to a high-up official in USAID, the USAID member of the field visit party reported that the accounts of human rights abuses heard in the Omo were all ‘third-hand.’ It is clear from the transcripts, however, that many were first-hand.”

The recordings were made during a January 2012 mission to the Lower Omo Valley, in southwestern Ethiopia.

“These transcripts show that these delegations heard quite a lot,” Anuradha Mittal, the executive director at the Oakland Institute, told IPS. “These donor governments now need to take responsibility for their inaction, to look critically at these questionable development policies.”

While no formal report has ever been publicly released by either USAID or DFID following the January 2012 mission or a follow-up in November, IPS was able to see a leaked copy of a four-page joint briefing that followed the January discussions (no report was leaked following the November mission).

That report notes the mission members were offered allegations of “rape of women and … a young boy”, “use of force and intimidation with the presence of the ‘military’”, and “Government threats including ‘sell your cattle or we will inject and kill them’”, among others.

The report concludes: “As a consequence of these events the Mursi and Bodi [local ethnic communities] in particular stated that they were living in fear, resorting to other food sources or going hungry. The phrase ‘waiting to die’ was used. Although these allegations are extremely serious they could not be substantiated by this visit.”

This last phrase was bolded and underlined, and further follow-up was recommended.

According to the Oakland Institute, USAID and DFID subsequently reported this conclusion to the Development Assistance Group, comprised of 26 of the world’s largest aid and development agencies, including the United Nations Development Programme, the World Bank and the International Monetary Fund (IMF).

In March, the World Bank’s Inspection Panel cited evidence that the institution may be supporting Ethiopian “villagisation” programmes and requested an investigation into the matter, though Addis Ababa officials have since refused to cooperate.

Additional information on the villagisation process can be found here. Neither USAID nor DFID responded to request for comment for this story by deadline.

Over the past two decades, Ethiopia has emerged as a rising economic powerhouse. This has prompted international donors to heap praise and aid monies on the country in the hopes that it can help to anchor the restive Horn of Africa and lead what has been referred to as an “African Renaissance”.

In recent years, this support has translated into around 3.5 billion dollars annually in various types of aid, comprising more than half of the country’s budget. Yet that assistance has in part bolstered a series of aggressive, far-reaching national development plans put in place by Ethiopia’s long-time former leader, Meles Zenawi.

These include contested hydroelectric dams and massive agricultural plantations, for which mass land-clearing programmes have threatened to drive an estimated 260,000 locals off their lands, to be forcibly resettled in other areas – the process known as “villagisation”.

Although Meles died last year, new Prime Minister Hailemariam Desalegn has made clear that his government would work to continue the development programme underway.

According to the recordings released by the Oakland Institute and other testimony gathered by rights groups in the past, the “villagisation” project has translated into an at times vicious programme of violence and intimidation against local communities, often perpetrated by the Ethiopian security forces.

“The Ethiopian government comes and takes up all our land and gives us violence, and they rape our wives,” one Mursi man can be heard telling the USAID and DFID officials during a meeting near the South Omo community of Hailewuha.

Another Mursi man warned: “We are only waiting for death. This land is being ploughed by the government.”

According to Hurd’s account, this particular meeting became quite heated. He states that the U.S. and U.K. officials present appeared to want to focus on development issues – what services the local communities wanted from the government, for instance – but that Mursi representatives kept steering the discussion back towards the abuses they said were being perpetrated by the government.

It appears clear that the officials were moved by the testimony they heard.

“[O]bviously we agree that it’s unacceptable, beatings and rapes and lack of consultation and proper compensation,” a DFID representative stated at one point. “I totally agree … and would raise very strongly with the government as the wrong way to do this. It just simply is wrong. It simply is wrong. Obviously, we totally agree and it’s worrying to hear about those things.”

While it is unknown how strongly either delegation has since pushed these points with the Ethiopian government, the final decision on the part of both governments – that such allegations are impossible to substantiate – continues to stand as official policy. In any event, critics are warning that neither the villagisation processes nor the Western aid funding have changed in any meaningful way.

“This evidence clearly shows how these aid agencies are both directly and indirectly providing funding for a government that has been a human rights abuser with regards to its development policies,” the Oakland Institute’s Mittal told IPS.

“This whole idea of a ‘Renaissance state’ is taking place at a huge cost, being borne especially by the indigenous communities – and USAID and DFID are responsible for fuelling these policies.”