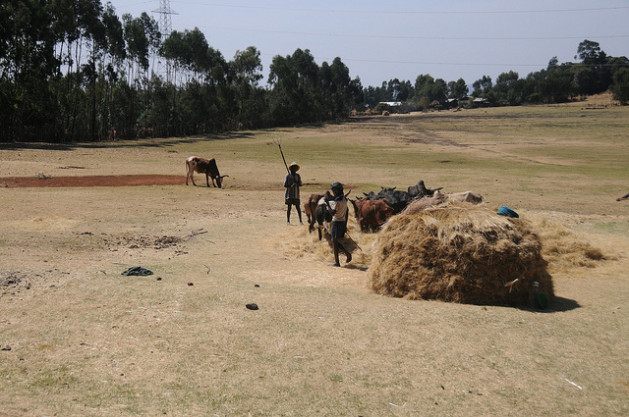 Despite Ethiopia having one of the fastest-growing economies in the world, it also remains one of the world’s poorest countries. Corruption has played a huge role in hindering the development of this Horn of Africa nation. Credit: Elias Asmare/IPS

ADDIS ABABA/LONDON , Jun 16 2013 (IPS) - Ethiopia may be one of the fastest-growing, non-oil producing economies in Africa in recent years, but corruption in this Horn of Africa nation is a deterrent to foreign investors looking for stable long-term partnerships in developing countries.

On May 11, in the biggest crackdown on corruption in Ethiopia in the last 10 years, authorities arrested more than 50 high profile people including government officials, businessmen and a minister.

Melaku Fanta, the director general of the Revenue and Customs Authority, which is the equivalent rank of a minister, his deputy, Gebrewahid Woldegiorgis, and other officials were apprehended on suspicion of tax evasion.

But the arrests have raised questions about the endemic corruption at the heart of the country’s political elite.

Berhanu Assefa of the Federal Ethics and Anti-corruption Commission of Ethiopia told IPS that these arrests highlighted how corruption has insinuated itself into the higher levels of officialdom.

“Corruption is a serious problem we are facing. We now see that corruption is occurring in higher places than we had previously expected. Areas vulnerable to corruption are land administration, tax and revenue, the justice system, telecommunications, land procurement, licensing areas and the finance sector,” he said.

Ethiopia ranks 113 out of 176 countries on the Corruption Perceptions Index of Transparency International, a global civil society coalition that encourages accountability. The country has also lost close to 12 billion dollars since 2000 to illicit financial outflows, according to Global Financial Integrity (GFI), whose statistics are based on official data provided by the Ethiopian government, the World Bank, and the International Monetary Fund (IMF).

Dr. Getachew Begashaw, a professor of economics at Harper College in the United States, told IPS that there was a fear that the recent high profile arrests were merely political theatre designed to placate major donors such as the World Bank and the IMF, and to give credibility to the new regime’s fight against corruption. Prime Minister Hailemariam Desalegn took over leadership of the country after Prime Minister Meles Zenawi died in August 2012.

“They are using this as a PR stunt to appease not only the donors, but to also dupe the Ethiopian people. Because many non-party affiliated Ethiopians in the business community are complaining, and this complaint is trickling down to the average people on the streets,” he told IPS.

According to the World Bank, companies held by business group the Endowment Fund for the Rehabilitation of Tigray (EFFORT) account for roughly half of the country’s modern economy. The group is closely allied with the ruling Ethiopian People’s Revolutionary Democratic Front (EPDRF), an alliance of four parties.

EFFORT is a conglomerate formed from assets collected in 1991 by the EPRDF to rehabilitate the Tigray region in northern Ethiopia after it had been decimated by poverty and conflict. The Tigray People’s Liberation Front (TPLF) is the lead party in the EPDRF coalition.

Tigrayans, however, only account for eight percent of the country’s 90 million people. According to Abebe Gellaw, an exiled Ethiopian journalist and founder of Addis Voice, a web platform that provides news that is otherwise censored by the Ethiopian government, EFFORT has become a business racket for the Tigrayan elite who are monopolising major sources of the country’s wealth.

“The TPLF controls key government institutions and a significant portion of the economy. For over 15 years, EFFORT has been used by the TPLF to channel public resources and funds to the coffers of the TPLF through illegal deals, contracts, tax evasion, kick-backs and all sorts of illegal operations,” he told IPS.

She claims her husband paid himself a modest salary of 250 dollars a month, yet the online website “the Richest.org”, which publishes the net worth of the richest people in the world, recently divulged that Meles was in fact one of Africa’s wealthiest leaders having amassed a personal fortune of three billion dollars. This has led many to question the provenance of the erstwhile leader’s wealth – when he had no known business engagements.

Illicit financial flows as a result of corruption are a major hindrance to a country’s development, undermining institutions, economies and societies. According to the Africa Progress Panel’s Africa Progress Report 2013, the continent is losing more through illicit financial outflows than it receives in aid and foreign direct investment.

A commitment to greater accountability and transparency to curtail illicit financial flows should occur on both the national and international levels, according to E. J. Fagan, deputy communications director at GFI.

“Reforms and policies are needed to strengthen customs enforcement and make governing apparatuses more transparent. The international community can create a multilateral system of automatic exchange of tax information that African countries like Ethiopia can access, so as to make it difficult for illicit actors to hide money and transfer large amounts of illicit money without detection,” he told IPS.

Begashaw added that corruption in the social sphere also breeds social inequality, disenfranchisement and a breakdown in national unity and civil society.

“The very existence of parastatals and TPLF-affiliated endowed business conglomerates like EFFORT is a major source of corruption. The Birr (Ethiopian currency) will depreciate and inflation will skyrocket. The capacity of the state to provide public goods and services will decline. Free market competition will be eroded. Government revenue will be reduced and the budget deficit will rise.

“If they are really serious about combating corruption, they should start doing so from the top,” he said.